I am a private pilot. I posed a question to instructors in the flight school and got differing answers. For a given aircraft, landing at the same speed, with everything the same except for landing weight, and using maximum braking without skidding the tires, which will stop in a shorter distance after the wheels touch down: the plane at max gross weight, or the same plane lightly loaded?

I submit that because the heavy plane has more energy to dissipate, it would take longer to stop. Some instructors said that because there is more weight on the wheels, the heavier plane would stop in a shorter distance. I think it is a simple energy conversion physics issue.

If you discount aerodynamic effects, and assume the same landing speed, on a theoretical level mass makes no difference. The additional kinetic energy to be dissipated is exactly cancelled by the additional normal force. The kinetic energy is given by the formula:

The work done by braking is given by:

The braking distance given an initial speed v is then found by putting W = E, from which it follows that

Mass is removed from the equation. The kinetic energy is tranferred into heat, so the larger the mass the more heat is generated. But theoretically the stopping distance is unaffected.

Since the μ does not remain linear with mass a heavier plane will have an increase in kinetic energy which is higher than the corresponding increase in friction of the tires, thus a longer stopping distance.

All of this assumes that “maximum braking” means you have as much brake power available as the maximum friction force of the tires. Above a certain weight/speed this will not be the case for an airliner. They are designed for a particular amount of deceleration force at MTOW and that will be less than the amount of friction tires can provide on a dry runway. (See this question for more details on that.) That will also cause a heavier plane to roll farther.

Yes the maximum friction (and therefore braking) force is a linear function of weight. The higher braking force cancels out the higher kinetic energy, if we assume:

Landing Speed. Braking distance is a quadratic function of touchdown speed. For a small weight increase, we can maintain the same landing speed without much safety implication. Sure airliners dump fuel when attempting a landing close to max gross weight, but that is mainly to limit the touchdown slam, the main gears are not dimensioned for doing this at TO weight. Making the observation at the same landing speed is a really important limitation though, since braking distance is equal to landing speed square.

Residual lift. Lift dumpers remove lift: just after touchdown, the wing still creates considerable lift which reduces the normal (and therefore braking) force. Since the landing speed does not change in our assumptions, the lift decrease is the same, regardless of weight: $ F_N = W - L + \Delta L$. If we take two gross weights and work out the percentage of down force, we get: 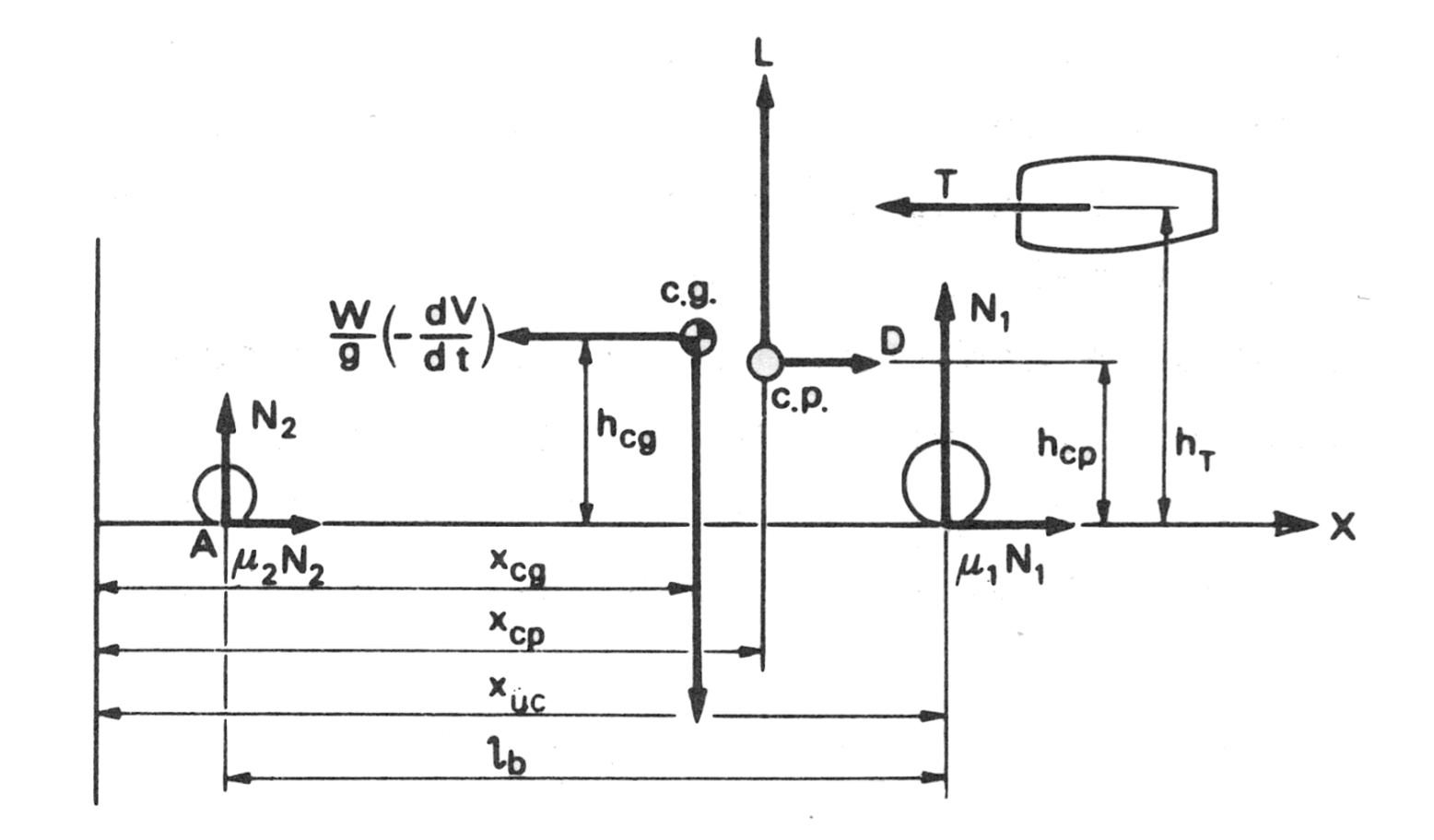 Usually, only the main wheels have brakes, but braking creates a forward moment which reduces the downforce on the main wheels. The magnitude of the effect depends on the height of the c.g. off of the ground, but if the nose wheel has no brakes, this effect increases braking distance at higher weight.

Heat buildup This is another factor that increases quadratically with landing velocity, and only linearly with weight. The brakes are dimensioned for emergency stop below V1 after engine fail, so they will cope with a normal landing at normal weights.

But the very shortest landing distance is at the very lightest weight: stay just above stall speed for the weight, even a small reduction is speed has a large effect on distance.

As a practical matter, the aircraft you describe will not fly as you assume. You would have to land very differently at the lighter weight to get the plane on the ground at the same speed as at the heavier weight. With normal landing technique you will touch down a good bit slower at the lighter weight. This will result in a much shorter rollout, as kinetic energy varies with speed squared.

The other answers deal better with your theoretical impossibility.)

The key to this question is "maximum braking without skidding the tires".

Notice ABS brakes will not help here, as they release the wheel as soon as it starts to skid.

Under slippery conditions, it is good to dump as much lift as you can once the plane is down. This would include raising flaps and using spoilers to maximum. And reverse thrust is certainly a good thing to have too.

Experience in the type of plane you fly will help fine tune this knowledge, and a slower landing speed a lighter plane can manage has major impacts on landing roll-out distance, but beware the slippery surface when light. Here stopping distance is much more unpredictable, and doubling the normal expected stopping distance is not a bad idea.

Landing at the same speed, there is one particular type of aircraft that will stop after a shorter distance if it is heavier: taildraggers.

Trying not to discount aerodynamic effects, the fact that one airplane is heavier than the other implies that the heavier one will need to touch the ground at higher angle of attack than the lighter one. Which means a greater induced drag between wheel contact and full stop.

It also allows to apply a greater braking force, since relative to wheels' contact point, center of gravity is further back when angle of attack is high (tail down).

One thing is right in your demonstration: braking distance is independent of airplane mass. However, it is the braking force that stop the airplane, not the heat produced by braking. The heat and noise produced during braking only consume a small portion of the kinetic energy of the airplane.

Not the answer you're looking for? Browse other questions tagged landing aircraft-performance weight or ask your own question.

8
How much force are large aircraft brakes able to exert?

2
What is the difference between landing weight and end-of-mission weight?
6
Is it feasible to replace brakes on airplanes with electric motor/generator?
6
How to calculate the DC-4 landing distance with this graph?
2
How do I calculate the landing distance in a landing chart with tailwind?
4
How much does weight really affect the operation cost?
8
What are the pros and cons of practising figure-eight landings on perpendicular runways?
8
Why is the A380’s with-reversers stopping distance the same as its no-reversers stopping distance?
2
How to reduce the landing roll distance