Can lift be created without air downwash?

I was looking at the great site code7700.com, but I don't really understand their explanation of lift and drag:

The so-called infinite wing displaces air for a while, but the air particles return to their original positions along the relative wind. The relative wind experience up wash as it approaches the airfoil and down wash as it leaves the airfoil. But the up wash and down wash are equal so the net effect is cancelled. Because of this, the aerodynamic force occurs perpendicular to the relative wind and their is no induced drag. In other words, all of the aerodynamic force is producing lift, none of it is pulling the wing backwards.

It seems this is a big confusion. Could someone just confirm that lift is created solely by the downwash and Newton's 3rd law of motion?

(Why air is deflected is not part of the question.)

If no downward acceleration occurs, there can be no lift.

However, a wing of infinite span will use an infinite amount of air for lift production, so an infinitely small amount of downward acceleration already suffices to produce lift.

Clearly, this is a thought experiment that cannot realistically be reproduced in reality.

To complete some of the other explanations here, lift is produced (at least the most part, there are other mechanisms by which lift is produced in real aircraft, such as engine mount angle) by downwash. Most if not all phenomenons producing lift can by explained by or can be linked to downwash.

By deflecting air downward, even if the velocity field at infinity is strictly unaffected by the immediate downwash of the wing, it still creates a slight deviation of the airflow close to the wing. This is translated to a pressure field, which combined with Bernouilli's theorem, gives rise to lift.

Basically, pressure lift can be explained by downwash and vice-versa.

Sorry but this source is pretty bad. The explanation is clearly wrong. You should download a basics aerodynamic book...

Here's what happen in a finite (real world) wing, the lifting of the wing generates a pressure field which induces vortices running from the lower surface to the upper, these vortices generate the downwash which is explicitly related to induced drag by a simple equation. The strength of the downwash is mainly depended on the lift coefficient and the aspect ratio of the wing, and in the limiting case of infinite wing (which is a theoretical aerodynamic's term) the wing's induced downwash doesn't exist and induced drag is zero.

So, downwash or upwash would depend on the wing geometry and lift, it's lift tha generates the upwash/downwash and also affected by it since it modifies the local angle of attack on each wing's section.

If you're considering the full airplane, the upwash/downwash of wing is also affected by the fuselage near the root.

This picture you posted is very wrong and confusing, because even in 2D flow, you have a cambering of the flow behind the airfoil (of course flow isn't just going flat after trailing edge). The flow then re-alignes with the freestream direction. 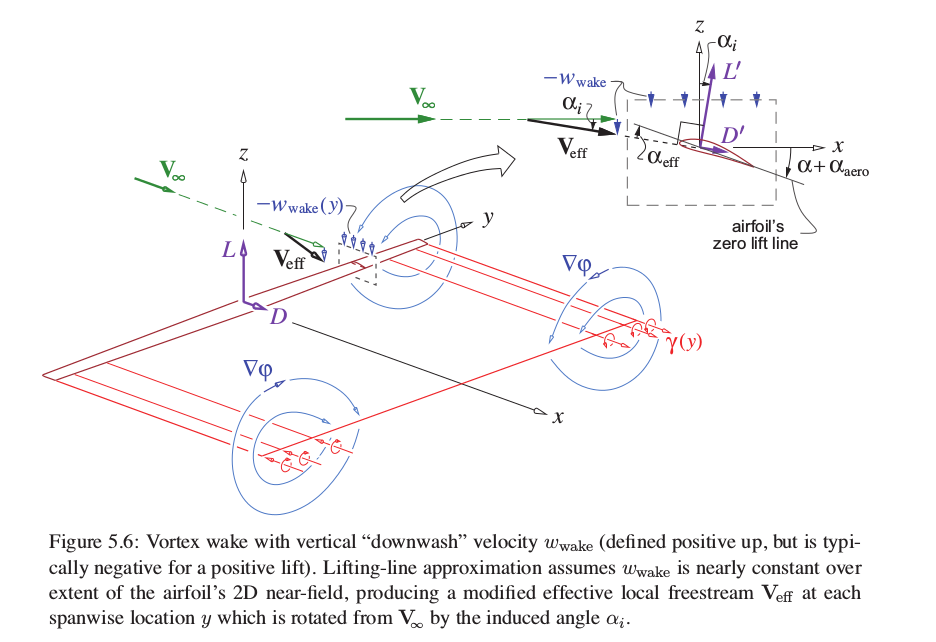 This picture. taken by a Stanford's Aerodynamic's lecture course, perfectly answers your question 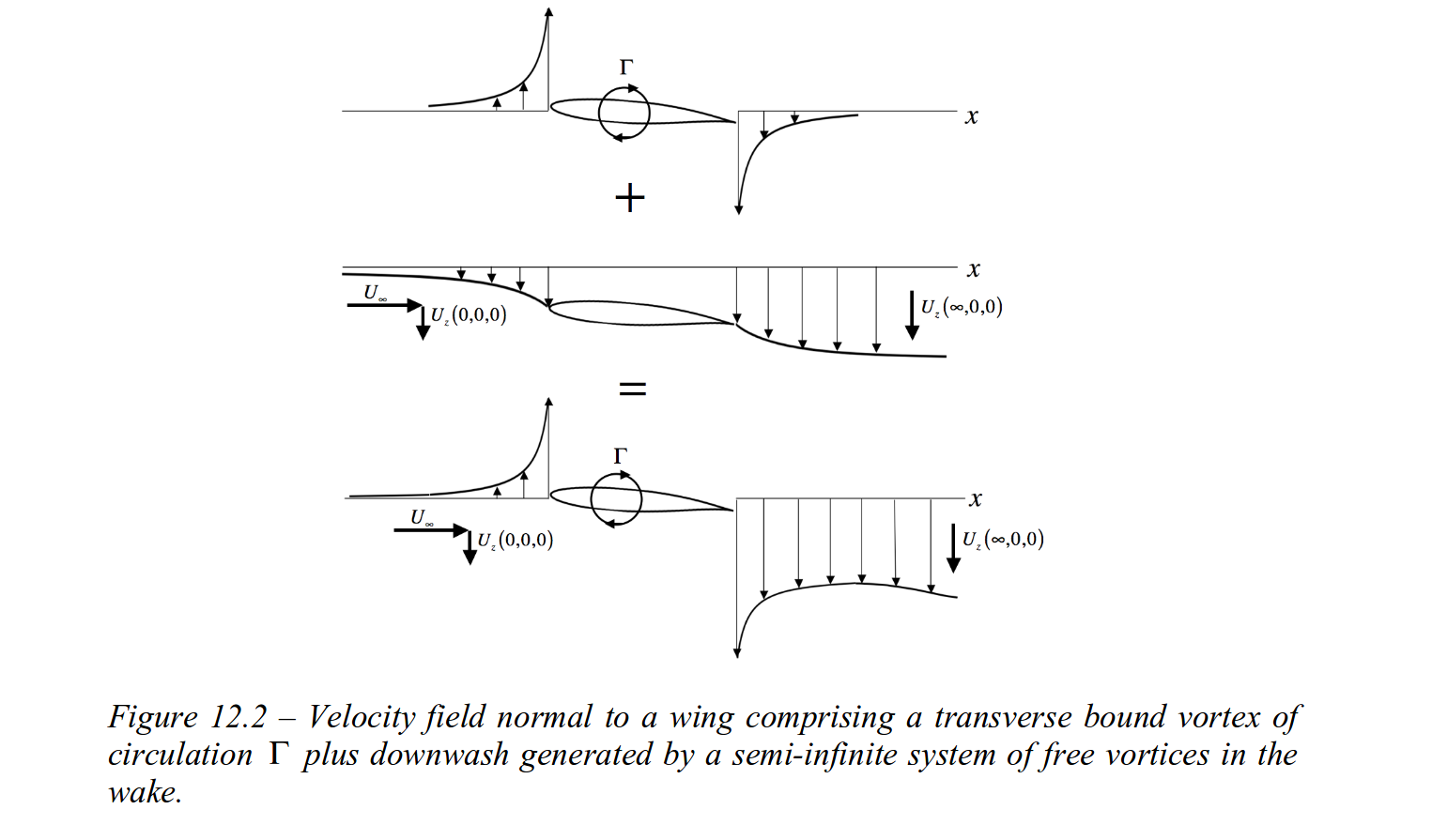 The Kutta-Jukowski theorem for lift states that lift is proportional to density, freestream velocity and circulation $\Gamma$ by the equation $L=\rho V_{\infty} \Gamma$. For a 2D airfoil the circulation is as depicted in the far upper sketch and will produce an upwash in leading edge region and a downwash in the trailing edge region, then in the second sketch you see the downwash induced by the wing's free vortices. Lastly, you see the combined induced flowfield.

60
How do wings generate lift?
11
Does static longitudinal stability require download on the tail?

4
What factors determine the direction of the resultant force vector?
8
Is the low air pressure on top of the wing the major contributor to lift?
10
Why do wall-to-wall airfoils in wind tunnels produce no (or infinitesimal) downwash?
0
Do wingtip vortices cause a decrease in the lift component of aerodynamic force, and do planes need to pull more AoA to compensate?
1
Is drag the only aerodynamic force that acts upon an asymmetric body (a glider in particular) travelling through the air?
2
Has wall to wall airfoil induced drag?
1
How does the airflow above an airfoil account for the downward turning-action of the airflow below the airfoil?
1
Explained intuitively, why does aspect ratio affect induced drag?