How does handover between Air Traffic Controllers work?

I have a questions about air traffic control.

I understand how the controllers monitor and direct aircraft on their intended routes while maintaining clearance distances to other aircraft and obviously recognizing and avoiding collision courses, or at least I think I do.

My question is about hand-offs and range.

As an aircraft reaches the boundary of a center's control area it is "handed off" or "handed over" to the next area control center. In some cases this "hand-off" process involves a transfer of identification and details between controllers so that air traffic control services can be provided in a seamless manner; in other cases local agreements may allow "silent handovers" such that the receiving center does not require any co-ordination if traffic is presented in an agreed manner. After the hand-off, the aircraft is given a frequency change and begins talking to the next controller. This process continues until the aircraft is handed off to a terminal controller ("approach").

From that I guess is some centres the controller is expecting an aircraft to appear from a particular bearing, though even then, the variance would be wide at radar ranges.

I also realize that aircraft normally follow set lanes and altitudes depending on direct etc, but an aircraft in transition could appear pretty much anywhere. No?

That got me thinking that there must be an overlap on the visible range and that an aircraft is, for some period of time, visible from both centers. I guess that would work, but then it got me wondering how each centre knows who has control over the aircraft and if situations could occur where nobody is...?

That all brought up another question. I have to assume there is more than one human at busier control centers all working together. How is that managed? Who controls what?

The answer to your question heavily depends on jurisdiction which you don't specify. I will answer for Europe-Greece where I have some knowledge. The procedures might differ between the ANSPs and are subject to change.

how can the controller know that there is not another aircraft approaching out of scope range that is on a collision course with the aircraft leaving or approaching or traversing the boundary of his scope range?

There are several factors affecting that and I would say it's part of the job:

In Greece I know that controllers are specifically requested to setup their CWP in such a way that they can see at least 10 nautical miles from the border of the controlled area and definitely they should see the whole sector at all times. Also if some area is quite busy they have a secondary radar screen (imagine it like a PIP) that can focus in that area. That way they can have a good look of crowded areas without losing the full picture.

Also there is not one controller per sector, there are two. The RO (radar operator) and the planner. It's the planner's job (among others) to coordinate with the neighboring sectors for the trajectory of all incoming flights, and if there will be significant deviations they will notify RO.

When a flight approaches the boundary (geographical or vertical both can happen and are valid) the RO initiates in their CWP the handout sequence. At the same time they switch the plane to the next sector's frequency. The other controller is not supposed to assume control of the flight until the plane calls them (yes there can be errors in frequency switching, that's why planes have the standby frequency on the comms panel). When the plane calls the next sector, the controller assumes control, finishes the handout sequence and the plane is officially theirs and doesn't belong to the previous controller anymore.

If the next controller doesn't accept the handout, the flight returns back to the previous sector controller. The details of that process changed after Helios 552 accident happened;(1) that's why I've said that the procedures might change at the ANSP's discretion.

There are exceptions and nothing is carved in stone: A flight might have requests that the current controller cannot grant safely: Altitude, higher or lower. Direct to some point outside of the sector. Speed change like for example 250 knots speed restriction waiver for approach sectors. Then the controller currently controlling the flight might handout the flight earlier to the next sector with or without coordination with the next controller depending on the situation.

Also note that the FIR design (sectors, airways and points) is not done randomly but in such manner that there are no conflict points on the boundary of a sector but closer to it's core. So that the surprises on sector seams are minimized. See the appendix for a detailed example.

Finally, for sectors where the handover of climbing or descending flights is routine (TMAs for example), there are predefined altitudes for handover. For example a flight should be at FL210 when crossing the sector boundary. Again, nothing is carved in stone and there might be small deviations. If there are big deviations, the sectors coordinate as I've mentioned before.

All the above happen between control sectors in the same FIR. When handing over control to other FIRs that is a whole other story. Flights are coordinated via a communications channel, either manually (via telephone) or automatically (via protocols like OLDI). The boundary sector controller of the next FIR expects the flight on a specific point at a specific time. If the flight doesn't show up they start looking for it... They call at the expected frequency, they call at the emergency, they call the previous FIR (and not necessarily with that order).

how each centre knows who has control over the aircraft and if situations could occur where nobody is...?

There is no such thing as nobody is in control when we talk about en-route ATC. The flight is in the control of the sector (and FIR consequently) that "contains" the flight in the 3D space. The fact that you "see" the flight doesn't mean that you control it. It means that you know its presence which is a good thing.

I have to assume there is more than one human at busier control centers all working together. How is that managed? Who controls what?

Please see above the comment about RO and planner. There are also other very good answers on that specific question like this one where you can see somewhere in the end, a

Here is an example from Milos sector (aka AC5) of Greece. To declutter the map, I've hidden the coastline, and displayed only the aerodromes. The sector is the black area and the rest of the FIR is in gray. Note that this is not the case in reality, I've just changed the color setup to highlight the area of interest. 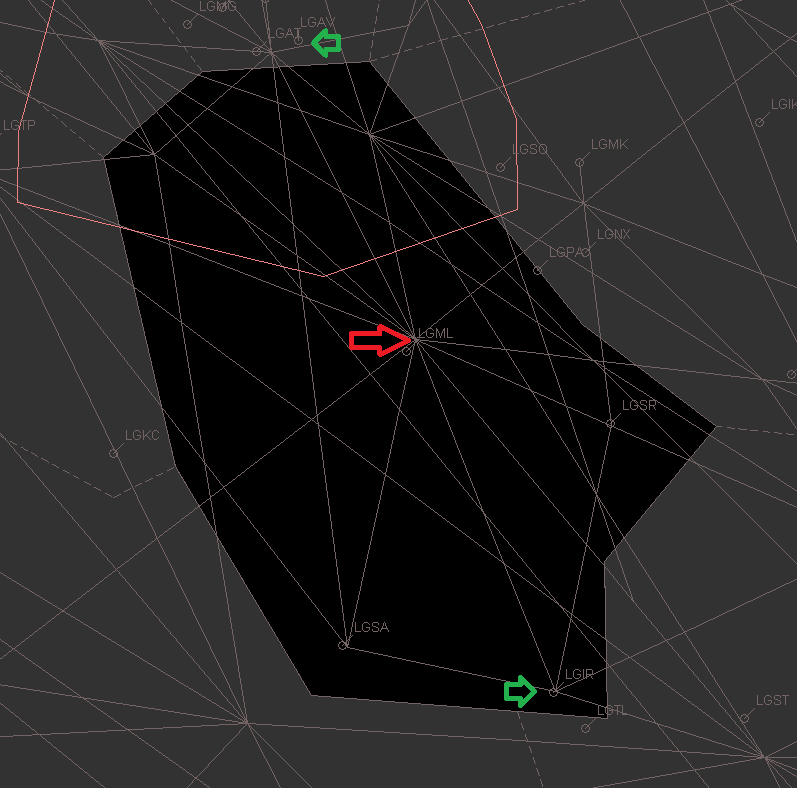 To get a better idea of the area, here is what is displayed. Milos island is on the center.

Without getting into the details of the sector as this will be off topic, you can see that the conflict point I was talking about is where the red arrow is. That is MIL VOR-DME located in Milos island. There you have 10 airways(2) converging, being "fed" by Athens airport (LGAV) in the North and Heraklion airport (LGIR) in the South (green arrows). As I've mentioned, the conflict point is almost on the sector's center. It's right in the controller's eyes, away of the "ambiguity" of the sector border.

One might argue that there are 2 more points where airways converge, one in the North (KEA VOR-DME, name not shown) and one Northwest (DDM VOR-DME , name not shown) that are very close to the next sector border. Though this is true, the points are not as big conflict points as MIL VOR-DME because

Also notice that Athens TMA (light coral line) overlaps will AC5. That means southbound departures from LGAV will be handed over to AC5 when they are way in the sector, away from the boundary.

(1) Many people ask how the Helios 552 accident can be related to the process. It's not related directly. Before Helios accident, the process was as follows: Propose the aircraft to next sector. Next sector accepts the proposal. Previous sector sees that and switches the frequency. That was reversed: the receiving sector is not accepting the handover unless the aircraft calls first. That way it's easier (and faster) to spot flights that for any reason did not call. As you can see, it's not directly related, but it was a change to keep the procedure on the safe side.

I was a controller in the U.S. and think this is a good, fundamental question about ATC that is common around the world in the airspace between airports. The concept is one radar controller (and often an assistant) are made responsible for everything within a vertical and lateral boundary (a "sector" they are assigned to) that is drawn on everybody's adjacent radar scopes too. If you see an aircraft target, which also shows its altitude, you will know which sector "controls" that aircraft and can call them on the interphone if it is headed toward your own sector and is in conflict with one of your own. You know it's headed toward your sector because the other controller will "initiate a handoff" which makes it pop up on your radar screen with a blinking "handoff" indication. At that point you can look up its route of flight, current altitude and assigned altitude and determine if it conflicts with any of your aircraft for example headed in the opposite direction. That happens sometimes, and in that case you call the sector that is handing-off, and tell them to change the route or altitude assignment so it no longer conflicts with your own aircraft. They do that, and only then do you accept the handoff. In that way, every aircraft in your sector or headed toward your sector is kept separated from all the others. We call this "positive separation."

24
What is a TRACON?
4
How can an ATC choose the right flight level and heading for airplanes?
7
How unusual were MH370's final ATC exchanges?
1
Why do airlines not use direct routes?

17
How does ATC protect Air Force One?
4
What is the authority of the Air Boss at an airshow?
16
If I'm on a IFR flight plan with appropriate IFR reserves, and I'm given a lower altitude which will consume more fuel, what should I do?
10
What is an air traffic controller's role in handoffs?
7
Who manages air traffic during Red Bull air races?
6
How do messages get from the destination airport to a pilot?
9
How many aircraft does an ATC controller usually handle at the same time?