What amount of lift would be created in the fallacious "lift from equal transit time" theory?

A wrong --but simple to understand-- theory for lift states:

(What is wrong is not Bernoulli's equation, but the assumed relationship between path length and speed.)

Such theory is, for instance, presented as correct in this book.

We know this theory is wrong and lift created by path length difference would be a very small percentage of the lift actually measured (and even null for symmetrical airfoils).

Let's assume a rectangular wing with a simple cambered airfoil, at the critical angle of attack:

The theoretical lift coefficient of a NACA 4412 at the critical angle of attack (about 16 degrees) is approximately 1.7. \begin{equation} c_\mathrm{l}=1.7 \end{equation}

For our purposes, that same airfoil has its upper "surface" about 1.03 times as long as its lower, which can be seen by using the distance formula on the coordinates or integrating the cambered NACA airfoil equation. Here is the distance-formula method applied to the Airfoil Tools numbers (thanks to ROIMaison for making me check this calculation): 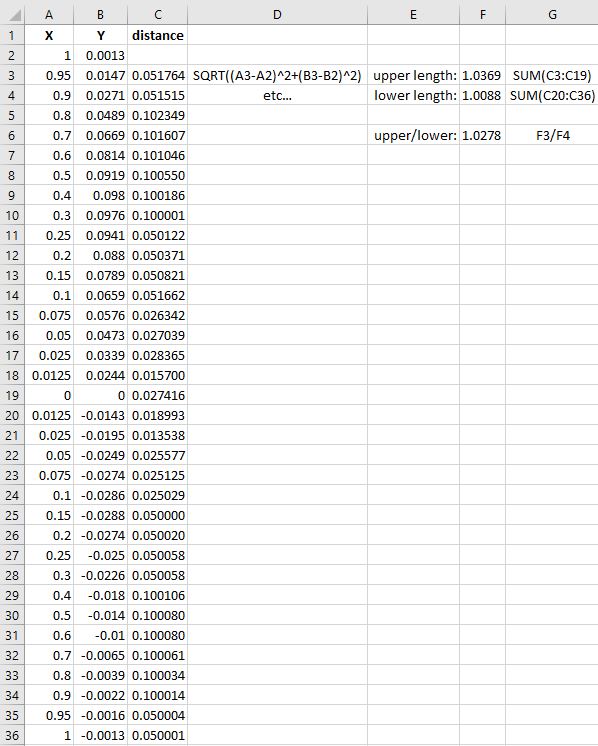 On average, therefore, the fallacy would predict the air moving along the upper surface at about 1.03 times the velocity as along the lower in order to join up properly.

13
What is the actual air speed over and under a wing due to Bernoulli's Principle?
3
How does Bernoulli's principle contribute in lifting airplane?
2
How to determine the thickness of an airfoil?
1
How do rotorcraft achieve lift?

31
Principle of aerodynamic lift: are misconceptions also taught in flight schools?
6
Why the dynamic pressure is not mentioned in the explanation of lift by Bernoulli's principle?
2
Is it possible to estimate airspeed on top and bottom sides of a wing at zero angle of attack?
6
What is the effect of flow separation on lift, pressure distribution and drag?
3
Is flow turning different from the Magnus Effect? If so, how?
3
How does Bernoulli's principle contribute in lifting airplane?
2
Why is air accelerating over the wing surface?
3
Why do low pressure arrows point away from the surface if the pressure/air cannot pull/suck?