As far as I know OSI and TCP/IP are both protocol stacks and pretty much follow the same ideas.

I'm not quite sure why they say that the current OSI model is inefficient? In what sense is it inefficient?

Another point, in the articles I read, which I thought was a bit vague, was that it said that the TCP/IP model is more 'modular' and can improve 'flight delays'.

Again, weren't both OSI and TCP/IP models created to make systems more modular? How can shifting to TCP/IP make current aviation systems more delay-tolerant given that the main cause of delay is air traffic and weather?

The current air/ground systems (based on OSI) are aviation unique. And they are limited by design to "messages no larger than 3.5 kilobytes". This limits how much information can be sent to/from an airplane, and is a major roadblock towards time based navigation and the broader data-hungry Global Air Navigation Plan (GANP), which includes SWIM for example.

Option one, develop better aviation-unique systems (OSI) that can handle more data. Very expensive to certify, very hard to get everyone to agree on the system. Option two, use the IPS (Internet Protocol Suite) that has proven itself. And thus commercial off-the-shelf equipment can be used.

The reasoning at the time was that the OSI protocols were more formally specified and included such things as detailed protocol implementation conformance matrices and combinations of functions at each protocol level called profiles, and thus were more suitable for avionics certification.

However, as is common knowledge, the TCP/IP protocols have long since been proven in the World Wide Web and therefore are able to offer potential economic benefit and provide for the rapid introduction of new services in the global aviation environment.

IPS will also allow easier integration with the already IPS based ground/ground communication between airlines and air traffic management. The current plan is to have a seamless transition from OSI to OSI+IPS to IPS in the next 15 years or so.

Why is IPS more delay-tolerant?

Example: When every single user (pilot, airline, ATC, airport, etc.) has access to the same real-time weather data (e.g. via SWIM), decisions can be made more correctly, in a timely manner, and consistently across the users. Just like what FANS-1 did for the Pacific operations in the 90's, but way bigger (history below).

This is the gist of it and explains why the shift. For technical standards there are plenty of ICAO documents on the web: ICAO Doc 9705 (OSI) and ICAO Doc 9896 (IPS).

Also related: Why Boeing and Airbus are Pushing for IPS (aviationtoday.com)

For ATC, FANS-1/A+ is mainly used in oceanic airspace and in delivery clearances in the US, and CPDLC (ATN-B1) in parts of the European airspace, and the hardware for both is not compatible (if used together) on older planes.

FANS-1/A+ combined with ATN-B1 creates FANS-2/B as one package (like on the Boeing 787). The plan is to make all systems use a standard network with higher bandwidth, which is the current goal of FANS-3/C (FANS-1/A+ and ATN-B2) using an IPS infrastructure while supporting the legacy planes. Check the progression of the 3 stars I added below. 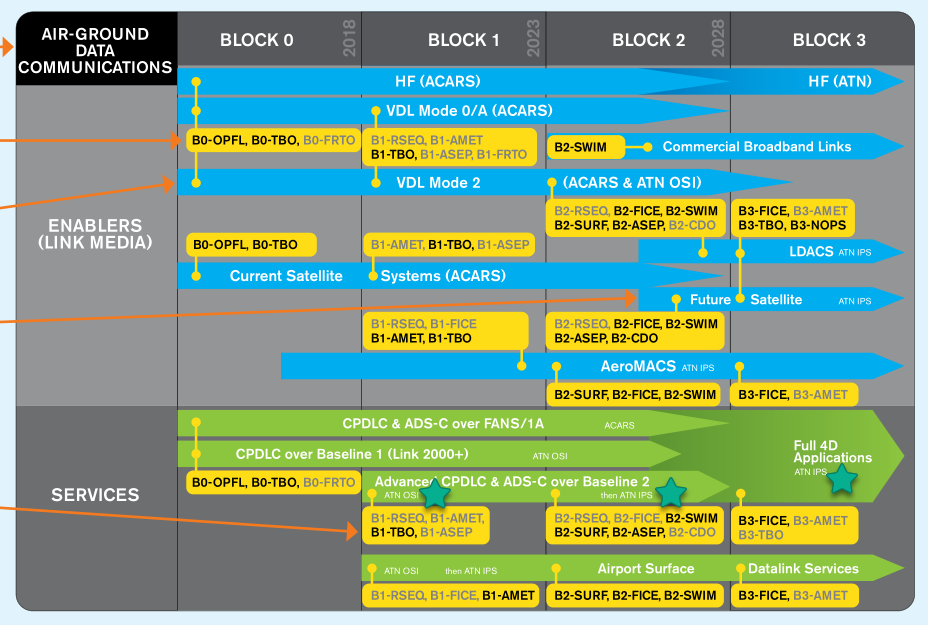 Not the answer you're looking for? Browse other questions tagged air-traffic-control data-link ansp or ask your own question.

18
What are the differences between ACARS and CPDLC?
9
Why can't flight management systems receive instructions directly from the controller?
3
How airplanes of new generation communicate with ATC over remote areas? (North Atlantic Region)
3
What's the relationship between FANS and CPDLC?
1
Which frequencies does VDL Mode 2 use when used via the ATN (rather than ACARS)?

14
What are the advantages, disadvantages and current state of affairs for text-based ATC?
4
How is ATFM handled in the USA?