How are the IFE Server, Floor Disconnect Box (FDB), Seat Electronic Box (SEB) and Seat Display Unit (SDU) connected to each other?

Generally speaking I've seen that the most used transmission protocols for avionics are ARINC 429 (629 in case of Boeing 777) and ARINC 664 or AFDX, since part of the IMA infrastructure, and in other rare case ethernet connections, however I haven't found particular specifications about this particular connections.

Does anybody know something about this or have good sources from which start back my research?

All data sources and servers are concentrated in the IFE Center which delivers them to the cabin LAN using Ethernet. The LAN itself is Ethernet.

Some data are received by the IFE Center from the Cabin Intercommunication Data System which is itself connected to AFDX (Ethernet, ARINC 664) ADCN network.

The cabin network then distributes data and power to overhead displays and seat IFE units. 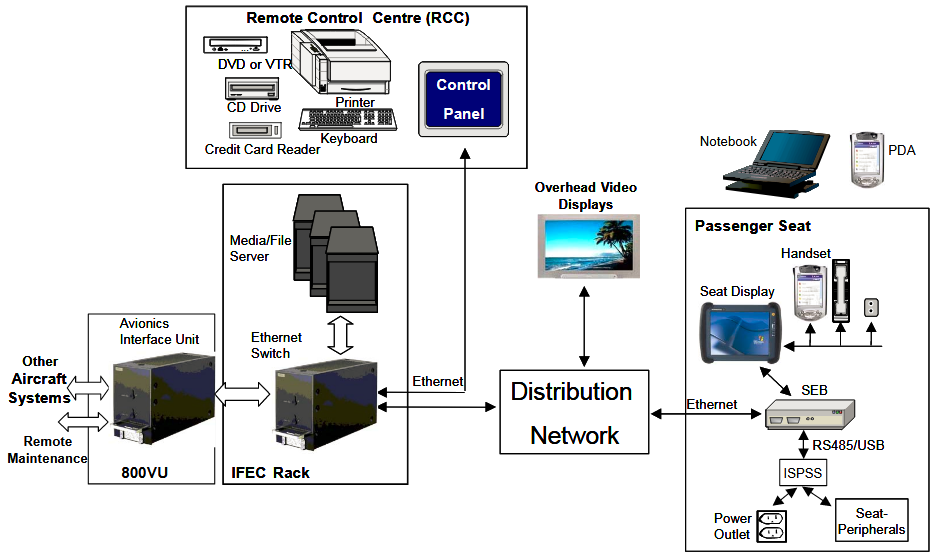 The IFEC rack is the source for all data sent to the passengers IFE units and the flight attendants panels. It contains files and media servers, is linked to external cameras (ETACS), landscape cameras and SATCOM.

The IFEC is also interfaced with the CIDS which supply it with data from systems like CDAU and ADIRS and other aircraft systems using AFDX, engine data from PCS, or discrete signals like cabin systems (oxygen) or public address.

IFE power is supplied by some SPDB.

The IFEC and SPDB are controlled by ICPs, FAPs, CWSs and RCCs.

The IFEC delivers data (audio, video, other data) as Ethernet frames to FDBs using a switch. There are actually two or more IFEC switches, each one feeds some FBDs.

FBDs also receive power from the SPDB. Ethernet frames and power are distributed by FDBs to overhead displays and IFE units.

Each seat gets its IFE unit which is connected using a SEB. The IFE unit encompasses the SDU, the PCU and headset. 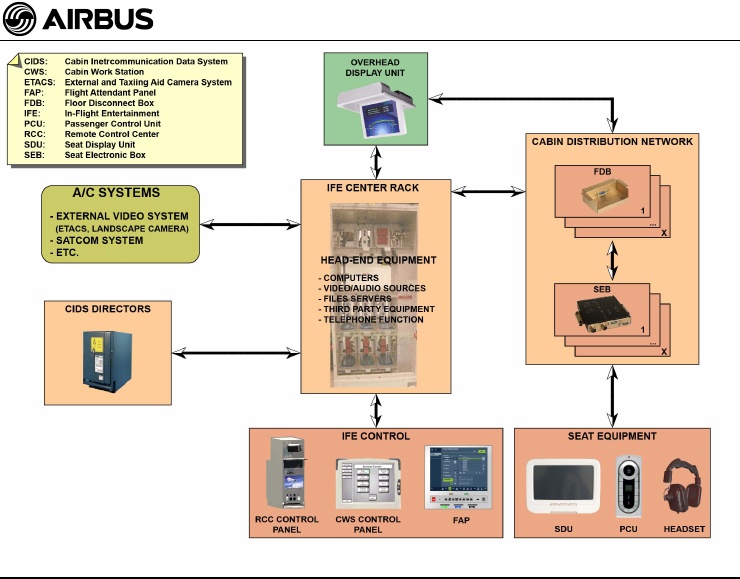 Your question was motivated by the security aspects of the cabin network vs. the other aircraft domains (e.g. avionics or cabin systems).

For Airbus, the cabin IFE network is only a layer 2 LAN with multiple Ethernet segments linked by Ethernet switches. There is no possibility to route malicious packets to other domains, since there is no routable (layer 3) protocol.

The interconnection between IFE and other systems is made through the CIDS, which is based on a redundant "director" which controls data destination. Without other elements, the assumption is security is primarily at CIDS level.

More information in this presentation (some pages are in German, most are in English).

Not the answer you're looking for? Browse other questions tagged aircraft-systems inflight-entertainment or ask your own question.

7
How does the in flight entertainment system works?
0
Does installing a PTZ dome camera outside the aircraft violate any FAA rules?

2
How are lavatory smoke detectors connected to the flight deck?
2
What are the differences between the proportional flow control FCU and pressure control FCU?
4
What are the adverse effects of keeping the PACKs on the A320 running with the LP air conditioning unit connected?
4
What are the differences between ADS + INS and ADIRS / ADIRU?
6
How does SLATS/FLAPS retraction damage the RTLU mechanical stop if we retract them after the ADIRS are set off?
10
How are electronic systems locked and connected in the electronic bay?
0
How exactly are checklists shared between the pilots?
2
How does MCAS communicate with other systems to know if the flaps are retracted or not?