What does this NOTAM about a STAR mean?

When planning an IFR Flight into KTPA using the BRDGE 8 STAR, I saw this NOTAM: 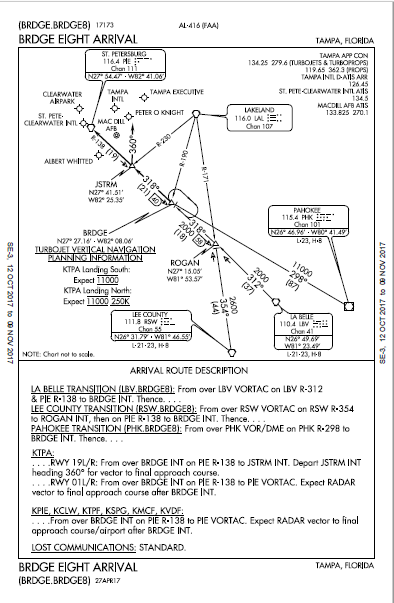 Would that mean that I can't use the LBV.BRDGE8 transition below 5,000, so then I would need to be higher on the en-route portion?

What does the NOTAM actually mean when I fly the STAR?

Check for additional NOTAMS concerning the PIE VORTAC. It appears that, for whatever reason that VORTAC radial is no longer functioning well at lower altitudes and, for whatever reason, the FAA is opting to not repair it. As it's a needed navigational aid for that STAR, the additional NOTAM applies. I'd guess the Orlando FSDO is in the process of decommissioning that STAR and issued NOTAMS until then.

UPDATE: It appears that this VORTAC out in Clearwater, FL has been malfunctioning, causing aircraft to stray off course and overfly noise sensitive areas at low altitudes, causing the Tampa airport management to receive a great deal of complaints. The FAA has up to now been faced with the repair tasks on that navaid. But it appears that, with the gradual decommissioning of VOR stations throughout the country combined with the preeminence of GNSS navigation, they have elected not to make the repairs and just leave the VORTAC as is for the foreseeable future.

Not the answer you're looking for? Browse other questions tagged instrument-flight-rules notam sid-star or ask your own question.

12
How can I get more details about information in a NOTAM?
8
What does "S-ILS" signify in an FAA NOTAM?
22
Why does this NOTAM make me think GPS is unavailable?
5
What is an NTAP when referenced in a NOTAM?
10
What documented practices are there for NOTAM creators and handlers to combat NOTAM spam?
6
What does SVC TAR/SSR U/S mean?
1
What does "ATS climb gradient" mean?
2
Does a turbojet aircraft restriction on a SID or STAR also apply to turbofan aircraft?
5
What is ILS CLASS in this airport NOTAM?