On a calm day, what determines the active runway?

When the winds are "calm" or variable, and as such there is no wind direction on which to base the decision on what the active runway should be, how is that determination made?

Almost every airport that handles frequent traffic will have a Preferential Runway Use Policy. That policy will cover things such as which runways to use for departures and arrivals when parallel runways exist, and the preferred direction even in calm winds.

It's based on the best noise abatement routes/gradients, taxi distances, terrain, etc.

So much so the preferred direction can be used in tail-wind up to a limit (8 knots component in certain places for example). Basically it's the usage that was envisioned when the airport was designed (which does take into account the historic wind data). 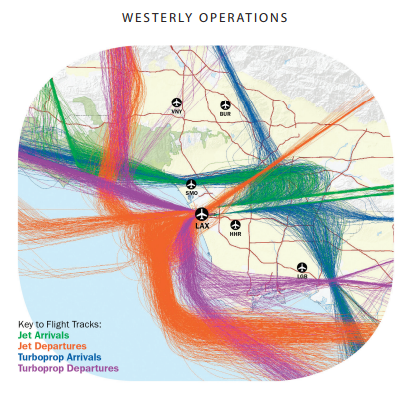 Westerly Operations is the normal traffic pattern used at LAX during the daytime (6:30 am to midnight) throughout the year. Aircraft approach the airport from the east and depart the Airport to the west due to the prevailing westerly wind. This procedure routes louder departing aircraft to the west over the ocean, while arriving aircraft fly from the east to the west over the communities on the eastside of LAX, including the Cities of Los Angeles, and Inglewood, and the communities of Athens and Lennox.

Above (source) being the normal traffic pattern, it will remain so during calm winds.

Not the answer you're looking for? Browse other questions tagged runways wind or ask your own question.

13
Why would a commercial flight be landing with a tailwind?
10
In calm winds, which runway should I select at an untowered airport?
10
What factors are considered when a runway is planned?

17
What's a quick way to determine which runway to use?
23
What determines in which direction a runway is used?
17
How does a large airport switch flow?
20
What are the most efficient layouts of multiple runways?
10
In calm winds, which runway should I select at an untowered airport?
11
What determines the touchdown zone and aiming point markings on a runway?
10
What factors are considered when a runway is planned?
9
Has reversing the active runway direction ever led to lined-up aircraft taxiing to the other end of the runway?
1
What is the difference between P208 and P209 base runway materials?