What are the effects of shockwaves on normal and supersonic aircraft?

I know that flying at Mach 1 is really risky, but what's the actual effect of the shockwave?

Not much, really, the shock wave just streams off of the nose of the plane, and an anti-shock from the tail. They stream away from the plane and don't hit it. 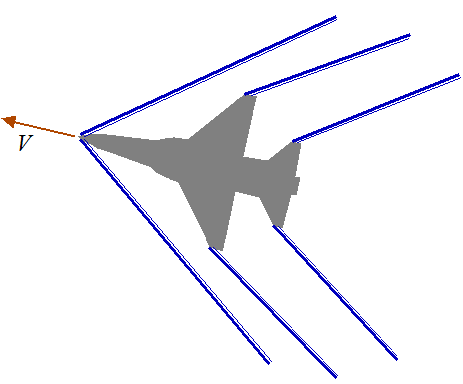 The shock itself is the compression that the flying aeroplane imparts upon the unsuspecting air in front of it: disturbances travel with the speed of sound, if the aeroplane travels faster there is no warning and air gets compressed suddenly when the aeroplane arrives. This is the nature of the shock.

The amount of compression is spread out It's not a shock like a bomb explodes, only a loud noise. Flying over Mach 1 is not inherently more risky than flying subsonic. When first attempted 70 years ago there was some unexpected behaviour to iron out, but that's aviation in a nutshell for you. Once understood, a problem is only an invitation to find a solution, and that is what the aero guys did.

A shockwave can limit the maximum speed of an aircraft as for each airfoil there is a critical Mach value $M_{crit}$ which is associated with the onset of a sharp rise of the drag coefficient $c_d$. This is due to the wave drag which increases as the shock grows stronger.

For this reason, in order to obtain a higher $M_{crit}$ value (i.e. increase maximum speed for same power or have the same speed for less fuel consumption) supercritical airfoils are used for transport aircrafts which employ a rather flat upper surface to delay and attenuate shock.

An other indirect effect on speed for supersonic transport aircrafts is noise regulations. For example, in the years of Concord there were incidents of broken windows near the airport, leave aside the sonic booms (have you ever heard a combat aircraft during a low-pass?). For this reason, much research is being conducted for "Low Boom" optimized supersonic aircrafts.

When shockwave-induced flow separation happens, a flow instability may appear which is called shock buffet. This involves an oscillatory move of the shock (back and forward) accompanied with an oscillation of pressure forces on the wing which will cause vibrations to the whole body of the aircraft. This is common in fighter aircrafts in maneuvering and in early stages it can warn the pilot that he/she is approaching stall. Usually pilots are aware of the flight envelope and within it, these vibrations are not likely to cause any harm to the structure (outside of the envelope many things can happen but loss of stability and control is more likely than a major structural failure). In either case, oscillatory loads are linked to structural fatigue, and this is another issue.

Not the answer you're looking for? Browse other questions tagged aerodynamics shock-waves transonic or ask your own question.

11
What happens when an aircraft breaks the sound barrier?
11
How does the A350 variable camber system decrease drag?

3
How to control torque effects on the ground?
15
What phenomenon causes the increase of drag with rain?
18
What does happen when a supersonic aircraft passes another supersonic aircraft, regarding sonic booms?
3
What are the effects of the tilted lift vector in a banked plane?
4
Do ramjets use variable geometry supersonic inlets?
5
How does a weak shock-wave boundary-layer interaction create wave drag (other than through direct shock losses)?
42
Is it dangerous for a supersonic aircraft to fly at exactly Mach 1?
1
How do the shockwaves (supersonic and hypersonic) interact with the structure?
2
Why would control-surface balance horns cause problems at transonic speeds?