What are the ways to perform air traffic control on long distance flights? [closed]

I have a few questions on air traffic control.

From my understanding, there are three major ways of sending control messages to an aircraft:

1) Direct radio link from control as long as the aircraft is in the line of sight.

a) For an intercontinental flight, how does the control know which ground station to use (since it wouldn't make sense to connect all ground stations to each airport) for control messages?

b) Are the control links (e.g., control-to-ground-station-to-aircraft) to communicate with an aircraft predetermined before take-off?

There are three major ways of sending control messages to an aircraft: Direct radio link [when] in line of sight, satellite, ground stations, e.g., tracon.

The way the question starts brings confusion so the many comments. There are two categories of radio links involved in voice/data communication: Between a ground station and the aircraft and via a relay, e.g. a satellite.

There are ATCOs on the site who may add details to this answer, but I'll draw the mainlines. In the US, ATC operational facilities are divided into 4 categories:

This split is shown on this figure:

that is extracted from this question.

This was the first part: We have clarified who are the controllers and ATC facilities, where they are and what phase of flight they control. Now let's see the radio equipment they use.

Aviation radio for ATC messages can use two types of frequencies:

For an intercontinental flight, how does the control know which ground station to use (since it wouldn't make sense to connect all ground stations to each airport) for control messages?

I hope you have got a better understanding, and know now this is not the case. Each ATC facility (tower, tracon, enroute center) uses different radio stations and a particular tower controls only the aircraft at this airport, using the local transmitter. The key is that ATC works with pre-agreed procedures to hand off control to the next facility when the aircraft leaves a given control area. An ATC unit controls aircraft in its area, and uses a ground radio station nearby the aircraft. OCA ATC indeed works with aircraft that are remote, and sometimes very far.

Are the control links (e.g., control-to-ground-station-to-aircraft) to communicate with an aircraft predetermined before take-off?

Yes they are, not on a paper, but by the procedures. When the aircraft starts its engines, the crew is in contact with the "ground controller" who is a controller in the tower, specialized in controlling aircraft which aren't on the runways. When the aircraft is ready for takeoff, the ground controller hands over to someone else in the tower who manages the takeoffs (this is "the tower controller"), then after take off the tower hands over to the nearby tracon, then to enroute (there will be several successive enroute centers), etc.

"Plates" used by crew indicate how to reach a given control facility. For example, on this chart, the frequency of the Denver ARTCC is mentioned explicitly. 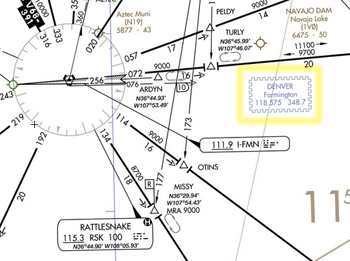 This is in case you are lost because this information is normally given by the previous controller prior to handing you over to Denver enroute center:

And here is how to contact the different ATC units at Paris - Charles De Gaulle: 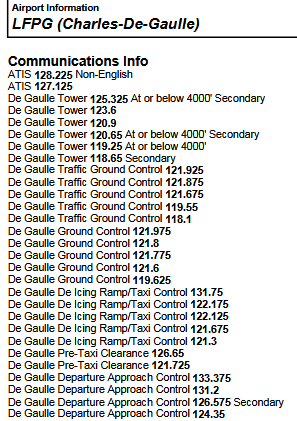 Not the answer you're looking for? Browse other questions tagged air-traffic-control flight-controls radio-communications radio or ask your own question.