How does the FADEC prevent compressor stall during rapidly increasing thrust demand?

My understanding is that if the demanded thrust is increased rapidly on a jet engine (for example going from nearly idle to TOGA during a go-around), the engine will likely experience a compressor stall: the combustion chamber is demanding a high quantity of air, but the front of the engine is unable to spin up and cope with the demand in such a short period of time.

This is the reason why engines spools up slowly: the FADEC is carefully controlling the amount of fuel increase to prevent a flameout; pilots should anticipate this delayed response compared to a piston engine.

My question is how exactly does the FADEC do this? Which parameters (air temperature / pressure) are being monitored, and what are the signs which the FADEC can detect such that it knows it has reached the limit of fuel increase?

Of course it depends on the engine, and the exact how is proprietary information. That being said, nowadays jet engines are designed to allow faster acceleration than before. So it's not just the fuel rate the FADEC controls.

To limit compressor surge and to provide good acceleration, the engine is equipped with a Variable Bleed Valve (VBV) system and a Variable Stator Vane (VSV) system. Both systems are fuel operated by the HydroMechanical Unit (HMU) and controlled by the Electronic Control Unit (ECU).

As for the parameters being monitored, first let's look at the common stations: 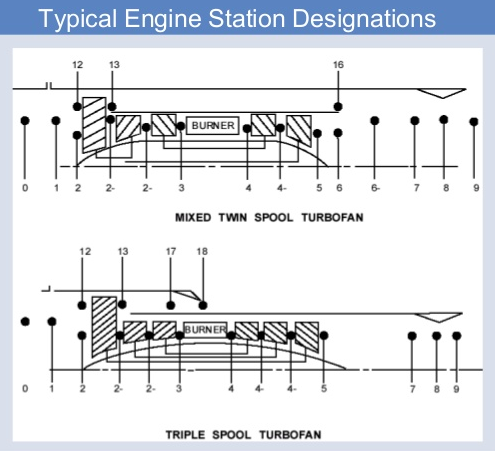 With the basic station numbers now known, let's look at what the ECU (part of the FADEC) monitors and controls: 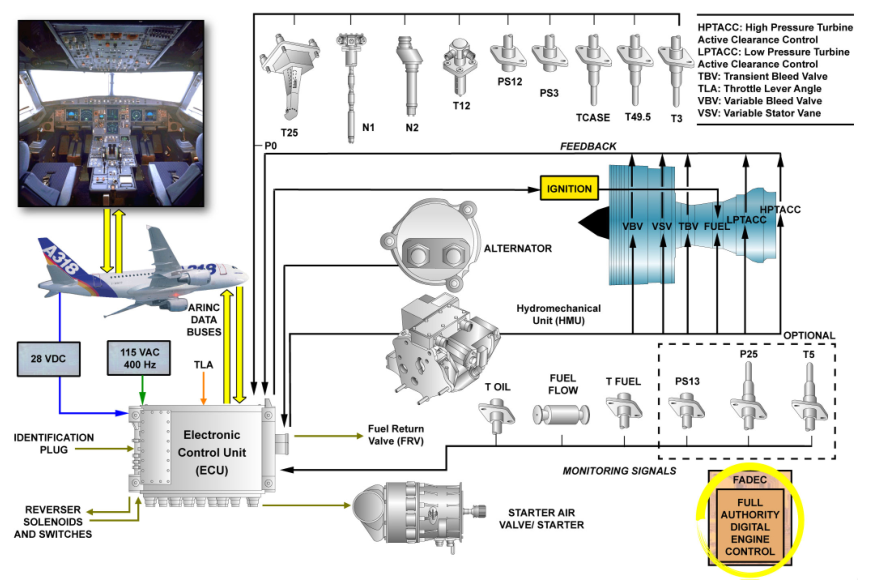 During testing, data for the optimal accelerations for all conditions (forward speed, air density, engine angle of attack, etc.) is collected. From there the FADEC is programmed to stay within those limits.

If a pilot demands full thrust from idle on ground on a hot day, the FADEC will have an idea of the initial fuel flow and rate to supply, and how to control the variable stators and bleed. From there it will monitor the many parameters, and adjust accordingly.

The same can be achieved on older engines using purely hydro-mechanical systems, but of course not as efficiently. There are of course different ways to override the FADEC and demand more power than the FADEC was designed to allow.

For the CFM above, the fuel flow commands depend on:

This flightglobal.com article about the GE flying testbed discusses the benefits of fine tuning the FADEC from real data including extreme angles of attack.

We think of the FADEC monitoring system as being like a screwdriver. We're using it to adjust and fine-tune the turbine clearances in real time by using the data to modify the control software and make it more efficient.

[Testing at] angles of attack of between 30Â° and 32Â°. The high-inlet-angle test is required for fan-stress and inlet-stability evaluation.

Trivia: In the making of the 777, the management wanted to skip the in-flight testing of the P&W engine (the first 777 engine). As those tests cost millions. They eventually played it safe and tested it on a 747 testbed, guess what happened:

The engine surged on its third takeoff, despite the numerous static tests they made.

9
Why does the CF6/CFM56 Turbofan Fan Frame contain 12 circular holes between the primary and secondary flow?
2
Why does a turbofan shut off when rapidly retarding the thrust levers?
5
Are modern aircraft (fully loaded and fueled) able to operate from hot and high airports?
3
What is the difference between variable and transient bleed valves?
2
How does a turbojet engine's performance change as the load on it varies?

37
Why should jet engine throttles be moved smoothly?
4
Would this work to reduce turbine engine spool times?
6
Why a higher compressor pressure ratio results in higher Thrust and lower TSFC?
4
Why does the LP compressor rotate in the opposite direction of the HP compressor?
2
Does the compressor stationary vane have stagger angle?
1
In the compressor characteristic, what does this value represent?
0
Why are inlet vanes used instead of variable geometry inlets to prevent compressor surge/stall?
0
Why is it that low fuel gauge is one indication of a compressor stall?