How can I calculate the optimum loiter airspeed for an aircraft?

I am in the conceptual phase of designing a 10 seater amphibian aircraft. I have done the initial sizing using Raymer and Roskam's methods. I have got my design point. To do a constraint analysis as well as to find the fuel fraction for loiter phase I need to calculate the optimum loiter velocity for a loiter time of 60 minutes at 7000ft. Breguet's range equation doesn't help since I don't know the fuel fraction of loiter phase. How can I calculate the loiter airspeed?

The optimum cruise speed is the speed at which fuel consumption is minimized per unit of velocity. So, you need to compute the derivative (C/v)' where C is rate of fuel consumption and v is rate of travel (airspeed). (I assume you want this by "loiter". If you want to minimize fuel consumption, that is called "maximum endurance" and that is explained below on the chart.)

Since fuel consumption is proportional to power, and power divided by velocity is thrust, we can graphically determine this point by the thrust required curve. The diagram below shows the relevant relationships: 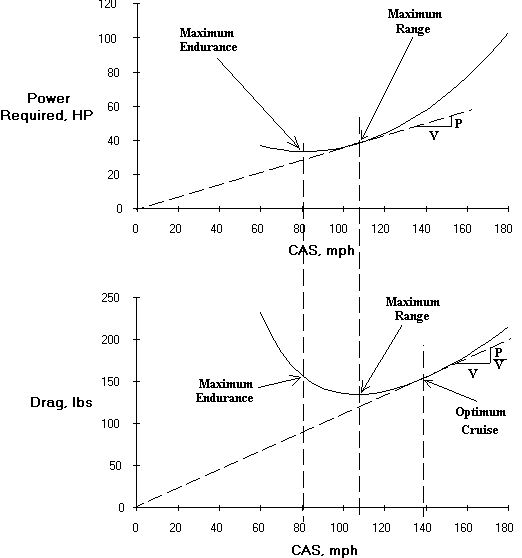 Would be great if you add your existing approach. Roskam has already an example towards an amphibious aircraft if I am not mistaken.

If you don't have other concerns and if your design is not already constrained by some other points (take off, max speed, etc) here's the first approach:

Remember that there's a trade off between max speed and loiter speed.

Not the answer you're looking for? Browse other questions tagged aircraft-design aerodynamics efficiency or ask your own question.

5
How do I obtain the max endurance altitude?