What are the rules in the UK about overflying built-up areas for fun?

I live in North London. It's not like we don't have a fair amount of noise pollution from the sky, with helicopters, and jets landing at LHR with a stupidly shallow glide path angle.

But in addition, quite often on a Sunday afternoon I hear this buzzing of a small propeller plane. It often seems to circle the area quite a few times before eventually going away. We had one today: I looked at it, and (this time) it was a small plane with two props, one on each wing. I have no idea what type of aircraft it might have been. It was flying low enough for the buzzing to be distinctly intrusive, and therefore affecting potentially tens of thousands of people.

It may not have been a flight simply for fun. I presume there's no way of finding out... but does anyone know what the rules are for just randomly deciding to fly over a built-up area like this for the fun of it?

PS I have friends in Cambridge and you often see small light planes overflying that town. They have a friend who owns a light aircraft, and once or twice my friends have said "oh, yes, that's Jim's plane", and have confirmed he does it for recreation.

Does anyone know what the rules are for just randomly deciding to fly over a built-up area like this for the fun of it?

In UK, the master document for air regulations is The Rules of the Air Regulations (ROTAR). UK being still part of the EU, they refer to a common set of rules at the EU level, the Standardised European Rules of the Air aka SERA (qui sera sera...)

UK ROTAR state a minimum flyover height, one for VFR, one for IFR:

(f) Except when necessary for take-off or landing, or except by permission from the competent authority, a VFR flight shall not be flown:

As you see this is not very high. In addition, as you mentioned, aircraft landing or taking off will indeed fly below these minimums.

Landing cannot be done at high angle, the proper slope is the result of two elements:

This glide slope has been chosen so that it is compatible with all sorts of aircraft approach speeds and vertical rates.

A standardized value of 3° is common. But when the approach area is limited, or when this is desirable to maintain a higher altitude a longer time to reduce noise on the ground, then this angle can be increased to 3.5 or 4.5°, or even 5.5°, this is the case for some approaches at Heathrow as @TomMcW told us. 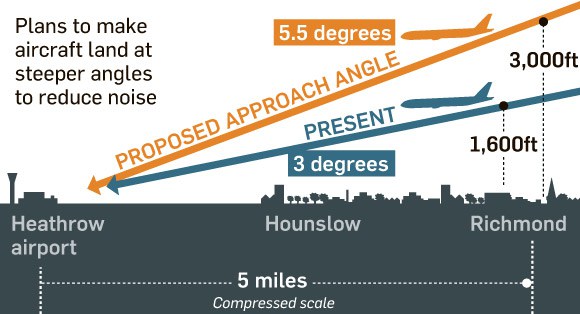 Alternatively, some airports have lower angles, down to 2.5°.

Not the answer you're looking for? Browse other questions tagged noise caa-uk-regulations or ask your own question.