I would like to know more about the general procedure used in modeling wakes for 3d panel methods.

Specifically I am looking at the effect of surfaces(fuselage and horizontal stabilizer) on the wake.

Is it better to merge wake panels with body panels or to allow the wake to clip through the body? Are there any advantages of using one over the other?

This has a couple parts to it, and it illustrates well the flexibility of well-designed panel methods.

First: panel methods can quite easily model multiple, disconnected surfaces simultaneously. Select a proper implementation of the Kutta condition such that a trailed wake can be created, and you're all set. The trick is to just make sure that all panels are considered as interacting with each other. I've read a couple papers with section detailing this, including Sizing Tool for Quadrotor Biplane Tailsitter UAS by Strom. Whereas, for one wing, you can compute the influence of all singularities on a given panel, for multiple bodies/wakes, you just compute the influence of all singularities -- regardless of what body they belong to -- on a given panel, be it on-body or in the wake. For lifting panels (i.e., panels associated with a body that should have some nonzero trailed vorticity), the Kutta condition can be computed in the same way (e.g., for an equal-pressure, nonlinear Kutta condition, the strength of a shed wake panel is determined numerically to correspond with the shed wake of any other lifting bodies such that the Kutta condition is satisfied for all shed wake panels simultaneously).

Now that you have a wake and it is being convected in some manner, we get to the question of what to do when multiple bodies are in close proximity and the wake is predicted to convect through a body. I've seen this treated in a rotorcraft paper (where the rotor wake is impinging on the fuselage) by Govinderajan in Contributions Toward Understanding the Effects of Rotor and Airframe Configurations on Brownout Dust Clouds.

The rotorcraft problem uses a proscribed displacement to keep the impinging rotor wake out of the fuselage. As shown in the image below (from Govinderajan), the lines represent a straight-line vortex filament connecting various control points along the predicted wake structure. The dashed blue line/blue dot are the predicted location for the convected wake. Since the control point is located in the interior of the fuselage, it is moved radially outward to a point 1.1 radii from the center of the fuselage (green dot above fuselage). 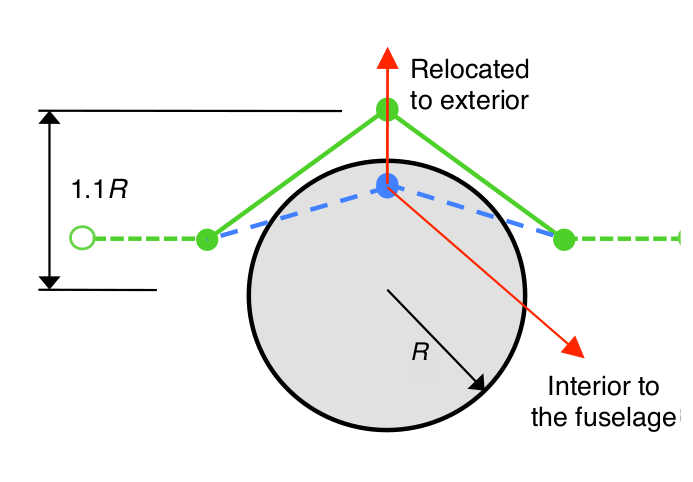 A similar procedure is also followed by Lorber and Egolf in An Unsteady Helicopter Rotor Fuselage Interaction Analysis and appears to be also present in Quackenbush et. al's Vortex Methods for the Computational Analysis of Rotor/Body Interaction, all of which present methods that can predict the performance of various aircraft quite well in comparison to experimental data. Unfortunately, I don't have a comparison to other methods for you, but this seems to be fairly common.

38
How does an aircraft form wake turbulence?
14
How does wake turbulence affect parachutists?
31
How do aircraft refueling in-air deal with wake turbulence?
8
Is there anything wrong with this more symmetric aircraft design, and why isn't it used?
9
What is the "compression ratio" of air hitting the nose?
7
What are the relative contributions of the body and wings to missile lift?
5
What, if any, would be the most correct term for the aerodynamic flight control surfaces of SpaceX's Starship?
1
How are panel codes like xfoil able to model turbulence and predict drag?
2
How does the wake behind a propeller blade affect the next blade if the airflow through the propeller should be clearing the wake?
3
What was the tactical purpose of the unusual flight control system that allowed the Northrop YA-9 to generate sideforce without banking?