What are the main differences between Flares and Chaff?

Over the years I've heard the two used almost interchangeably but after watching some videos it would seem that they each have specific and particular functions.

Both chaff and flares are defensive countermeasures deployed by military aircraft. The purpose is to confuse radar-guided or infrared-guided anti-aircraft missiles fired so that they can divert.

A good definition about them is here:

Chaff is composed of millions of tiny aluminum or zinc coated fibers stored on-board the aircraft in tubes. When an aircraft is threatened by radar tracking missiles, chaff is ejected into the turbulent wake of air behind the plane.

Flares are used to distract heat-seeking missiles. Most are magnesium pellets ejected from tubes to ignite in the wake behind the aircraft. These flares burn at temperatures above 2,000 degrees Fahrenheit, hotter than the jet engine nozzles or exhaust and exhibit large amounts of infrared light.

Flares are a, let's call it "passive defense system". They are used for misleading rockets fired on an aircraft. Many missiles are following a heat source to hit their target. In case of an aircraft, it's the engine. If such a missile is on the way, the pilot fires those flares. They burn really hot and the missile will fly into the flare instead of the aircraft. 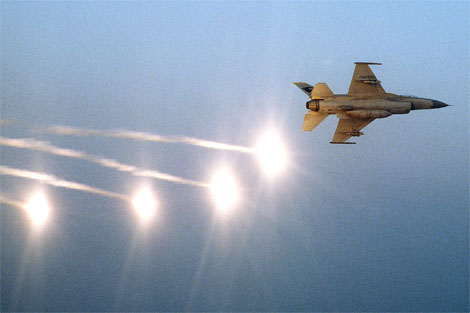 Chaff is also spread out by aircraft. There are used for, what can be called "electronic war". As you know, a radar sends out electromagnetic signals. If they are being reflected to the radar, there is a dot visible on the radar. This can be an aircraft but also lots of birds. Now, chaff is made of aluminium or metallized glass fibre or plastic. So, when the aircraft spreads a big cloud of that chaff, it is visible on the radar. And this can work like a curtain. There is a wall of chaff sprayed out. Behind that wall, every aircraft is invisible and operations can be accomplished secretly.

But chaff can also be used as "flare" but for radar-assisted systems. Like radar-lead missiles or radar-targeting systems by fighters. 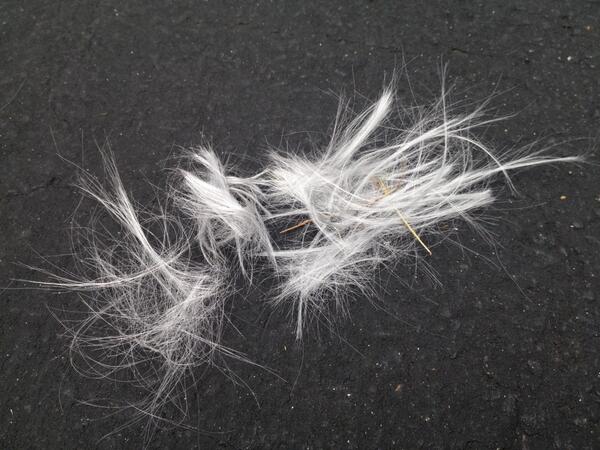 Chaff pods contain several small metallic parts of similar size and shape and their aim is to create false returns to the radar beaming the targeted aircraft. The sized and shape depends on the radar wavelength they try to spoof but I am unaware of the exact relationship.

Flare on the other hand targets heat seeking missiles. As user3528438 mentioned in their comment, they are "fireworks" that aim to create a brighter thermal image and drive the missile away of the aircraft's thermal trail.

The tricky part for the pilots (and perhaps the modern warplane designers) is to distinguish between the type of the homing missile, so that they use the right countermeasure for each threat without wasting consumables. That's probably the reason you've heard them as chaff/flare like there is no difference.

There are two ways for an anti-air missile to "see" its target:

Chaffs are designed to defeat the first category, flares the second :

In both cases they are employed to try to divert a missile from his target.

There are two common types of chaff. The most common is metal based and is reflective, designed to create a field of reflections and capture the radar receiver. They are not necessarily foolproof. For example, their velocity drops to the ambient wind velocity within a few seconds, were as an aircraft will continue to depart at a flight velocity. Also, metastatic radar and other techniques may see around / through them.

There is also IR chaff (also a pyrotechnic measure) which is designed to create a field of temperature, reducing the signal to noise of the targeted aircraft (or other target) and decreasing the capture and hold on that target. The effectiveness of IR chaff is similar to RF chaff as reported by several sources.

111
Why is the maximum speed of current fighter aircraft lower than those from the 1960's and 1970's?
10
What are MTRs used for?
10
When were flares first used as IR countermeasures, and by whom?
4
What's this sound? - Dogfight between F14 & MiG23
19
Fuel jettison in Top Gun, is there any reason to do this other than show-boating?
14
Why do military jets seem to always take off using the afterburner?
9
What are the correct procedures for military aircraft interception over international waters?
12
What are the ejection injury and fatality rates?
0
In general, what are the RPM ranges/differences between the various compression stages on a 2 or 3 spool (LP,IP,HP) turbojet/fan engine?
9
Did WWII fighters do a roll before engaging to identify themselves to radar operators?