What prevents someone from hijacking a radio frequency mid-air?

For someone who wants to stay anonymous and probably terrorize the skies, what protective measures do we have?

Without even thinking too deep, I can imaging the following scenarios for someone who's in a mood to mess around.

While transponders are required in and around busy airspace, someone who really sets their target on screwing it up can REALLY cause a lot of harm, potentially fatal by flying without one for quite some time as a primary target on ATC's radar.

What are the current preparations to stop this from happening?

This sounds like a “people problem”. That kind of problems is best solved with enforcement.

Source of radio broadcast can be localized and it is not particularly difficult. There are techniques for transmitting something secretly, but they need specific modulation. Rogue broadcast or jamming on simple AM voice channel will be trivial to triangulate.

So if somebody did it, the FCC or FBI would pull out appropriate equipment, hunt them down and throw them in jail. Broadcasting without license, or contrary to the license you have, is in itself a crime and they'd throw in charges for endangering, which are quite serious.

Now of course it would take some time to hunt the perpetrator down. However, the situation is not that dangerous. Basically it could be treated as communication failure. VFR flights would continue flying visually, IFR ones would follow last clearance and then as filed, landings can be cleared with a light gun. And then either the surrounding sectors would be OK, or the pilots would probably try to establish some alternate communication. Cell phones should work fine for small aircraft while airliners would probably use HF or Sat links to dispatch and ask the dispatcher to relay.

I think it is a vulnerability, yes. But it has worked so far, much like the "if hijacked, cooperate with hijackers and let things sort themselves out" doctrine that saved many lives until someone figured out how to game the rule (and cost as many lives as were ever saved).

Indeed, right now, we depend on these being rare cases, that can be dealt with in the methods used so far, which are surprisingly ham-handed: sending FCC radio trucks, civil air patrol or ham operators on transmitter hunts. It could be a great deal more difficult if you had concerted efforts by quasi-state actors acting on a large scale - not one rogue transmitter but 20 in each of 10 regions, and the transmitters are moving. Imagine an actor learned to perfectly mimic Kennedy Steve, and sat there on channel giving wrong instructions, or heterodyning key instructions.

And of course, if a quasi-state actor is involved, this could itself be part of a much larger scheme, such as simultaneously, 4 planes code hijackings while 19 cargo planes turn off their squawks entirely, all this to turn military eyes toward missing planes and away from their normal posts... So then somethiing else happens. This is what you can expect modern war to look like in a highly technological and networked society.

For all the technology, human workload is still the limiting factor - so such nuisance attacks would be all about creating excess workload and distraction for the guardians to put them off their normal game, so you can slip something through that would be otherwise impossible.

A huge amount of this kind of cyber-war is who is making workload for whom. You want the hackers to be the frustrated and overworked ones.

A solution for radio

Speaking of heterodyning, I was blown out of my seat by the Midway Southwest-Delta incident, where similar flight numbers acted on each others' instructions and -just like Tenerife- heterodyned over each other. Seriously? Still?? SMH...

I've been carrying Hedy Lamarr's frequency-hopping tech in my pocket since 1997 (CDMA). This allows a bunch - a whole bunch - of phones to share the same frequency block without stepping on each other, and it works. Obviously, this also authenticates the transmitter, since voice wasn't free in 1997.

And duplex radio is nothing new, that's where you receive on frequency R but transmit on frequency T, and the repeater transmits on R anything it hears on T. Combine them and it becomes a simple matter: the control tower transmits on one frequency, and planes use CDMA to talk to the tower. Every plane has a separate virtual channel, with encryption used for identification. When two planes talk at once, they both get through. Assuming the control tower configures it as a repeater so you hear all traffic, you hear both KLM and Pan Am. Even slicker, there are several possible ways to mute your own transmission, so KLM doesn't hear itself, they only hear Pan Am - and vice versa. This would be the everyday advantage.

During an attack, ATC can mute "that guy" or can mute all traffic except identified traffic, and ask unidentified traffic to ident in some alternate way, like "please touchtone 5 7 8", and keep changing the "CAPTCHA" as it were.

Stepping on CDMA is hard, because all radios are stepping on each other all the time normally. So it would be hard to block the tower's transmissions outward, or planes' inward.

The reality is that there are stuck mics daily on ATC frequencies. Pilots and controllers utilize guidance from the AIM and sometimes creative improvisation. There have been numerous cases of lone actors wreaking havoc with ATC in various countries and they are usually located with direction-finding and dealt with by police.

There is no strong countermeasure. Company planes and carriers normally have alternative com equipment which has been used. Normally cellphones are impractical.

So a swarm of illicit VHF AM transmitters could wreak havoc but the peril is rather inconsequential.

Just the rules and physics.

Bonus - Comms failures are not unheard of, there are other ways to communicate with ATC if you need to. Most of a flight, even an IFR flight, you don't really talk to ATC much. You gain clearances and switch "areas" (generic) but other then that, it's pretty quiet. It only really gets loud around airports or busy "areas". And with both sides of the conversation being able to hear anything said, both sides can go "nope wasn't me". And when in doubt the pilot just pilots. If it''s so bad that ATC goes dark or the pilot can't possibly make out what's going on. They just fly their last route/clearances/flight plan. Your going to have a very hard time getting a pilot, even a new one, to make a course change that puts his plane at risk. Avaite, Navigate, Communicate. That communicate one is last for a reason.

There are ways that can help an air traffic controller identify such a situation. How to handle it though is a story deserving another question. Take for example MUAC's RDF. It shows a circle around the airplane that transmitted. If you read the leaflet you can find more information on how that system works. The subject has also been covered here in that site: https://aviation.stackexchange.com/a/52219/878

There is something important to note though. The driving force behind that system wasn't the scenario you described. It was the need to make controller's life easier and help them spot the transmitting aircraft easier. As a side effect, if someone thinks that can be clever and transmit bogus messages, the controller will immediately see that the source of the transmission hardly matches the location of the plane.

Fore the sake of completeness and since links tend to break, here is what the controller sees: 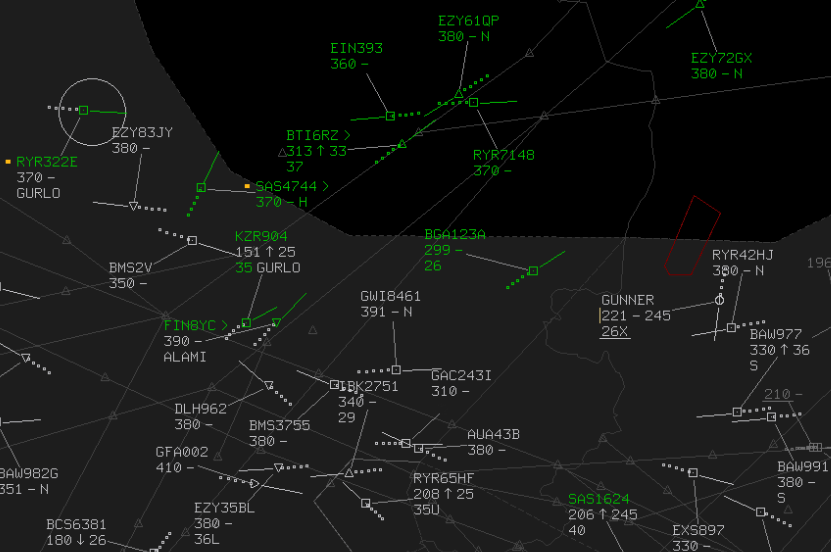 Notice the circle around RYR322E on the northwest corner of the picture.

For the time being this technology isn't deployed by many centers, I'm not sure if MUAC is the only one. But that might change in the future.

Not the answer you're looking for? Browse other questions tagged faa-regulations air-traffic-control usa radio-communications or ask your own question.

75
How do civilian pilots and ATC verify that other people on the radio are who they claim to be?
11
Is it possible for ATC to see who’s transmitting on the radio on their radar?
3
How does air traffic control communicate with an aircraft?

7
Is there a general radio frequency in Class G for broadcasting intentions?
6
How can I tune a frequency like 121.62 on a comm radio?
9
What will air traffic controllers do when radio contact is lost?
9
What frequency should be used for air-to-ground communication other than airport ground operation?
4
What prevents a government from selling/leasing publicly owned airports?
1
Is there a radio frequency that is sure to be quiet?
3
How many radio transmissions per hour occur on a given frequency over Europe and North Atlantic?
7
Can one “create” a private interpilot air-to-air frequency to chat?
0
Restore air traffic controllers' instructions from aircraft tracks