Are tracked landing gear systems still in use and development?

In the 1940's and 1950's, there were several tracked landing gear systems developed for the purpose of allowing landing on soft ground and/or using particularly heavy aircraft such as the B-36.

Are any such systems still in use and/or development?

(I have been searching and found quite a few examples but none in recent decades except for a proposal that suggests that it would be feasible to deploy modern improved tracked landing gear on C-130's, C-17's and 747s.)

For the first half century of manned flight, landing gears overwhelmingly had only a single, large wheel per leg. This was the cheapest and simplest way to ensure ground mobility, but ran into trouble when aircraft grew in size. When the XB-36 prototype started testing in 1946, only three airfields in the US were able to tolerate the 156 psi pressure of its single main wheels.

For operating from unprepared surfaces, tracked gears were the straightforward transfer from tank experience to landing gear design. 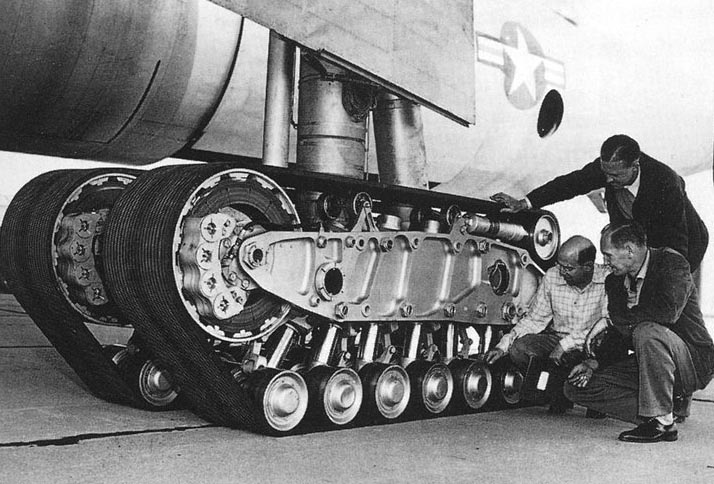 However, another route which was tried at about the same time was to increase the number of wheels the aircraft rests upon. With hindsight, the multi-wheel way was the better solution and has prevailed. When used with large, low-pressure tires it does not exert significantly more ground pressure than a tracked gear.

Some early and rather extreme examples for the multi-wheel route include the Arado 232 four-engine tactical transport aircraft. Only 20 were produced, however. 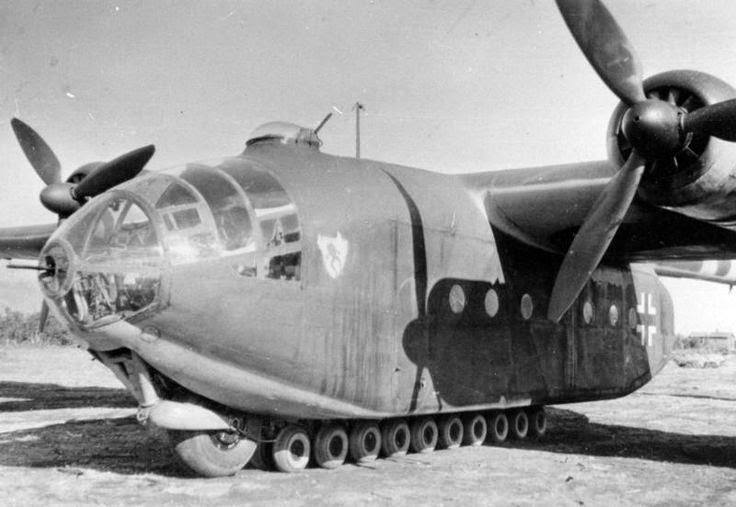 Arado 232 from up close. No prize for guessing why it had the nickname "Tausendfüssler" (millipede) (picture source).

When it comes to designing large aircraft for soft field operations, the Ukrainian design bureau Antonov has unsurpassed experience. This comes to bear in the landing gear of the Antonov 124, shown below (source). When you have 24 wheels to spread the load out, even 400 tons might not be too heavy, especially when the tire pressure can be adjusted from the cockpit. 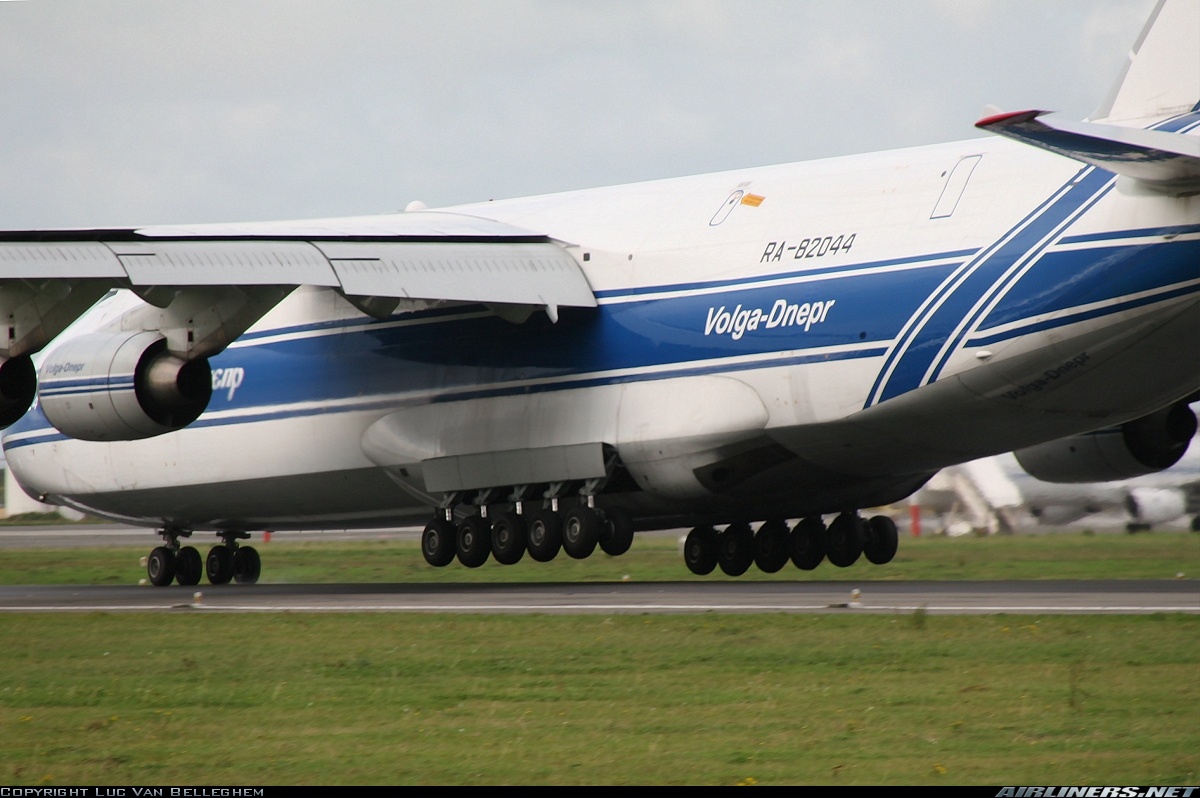 An-124 in a botched landing. No worry, the gear will tolerate this kind of abuse, too.

Therefore, the research on tracked gears has come to an end shortly after it begun, and even the B-36 ended its days on a four-wheel bogie. Today, every large airplane has at least two wheels per leg for redundancy and sometimes a lot more.

Magnesium Overcast, by Dennis R. Jenkins, is a history of the B-36, which covers the tracked landing gear experiments on pp.17-18. The XB-36 prototype was used for these experiments simply because it was a large and heavy aircraft that wasn't required for anything else at the time. One of his sources is an issue of the company's internal newsletter that's available online.

The problems with the tracked landing gear were that it added weight, about 5000lb for the XB-36, and that it made an unnerving screeching sound at high speed. Take-offs and landing were successful, but I suspect that it would have been substantially less durable than conventional undercarriage.

I doubt anyone is seriously considering the idea these days for large aircraft. Putting an unnecessary weight penalty on an aircraft is usually a poor idea, and making tactical landings in very large and heavy aircraft exposes that valuable asset to the enemy. It makes more sense to use tactical aircraft for tactical jobs.

33
Can jet airplanes operate on 'rough' airfields?
19
How heavy is too heavy to land on a grass strip?
12
Is there a best number of wheels per bogie?
2
Are there all terrain landing gears for planes?