Does an increase in inlet temperature affect fuel flow and power output?

The fuel flow rate decreases as the inlet temperature of the air entering the engine increases. Will the engine produce same amount of power as when the fuel flow was higher?

Most civil aircraft engines are "flat rated". See What is a flat rated engine? 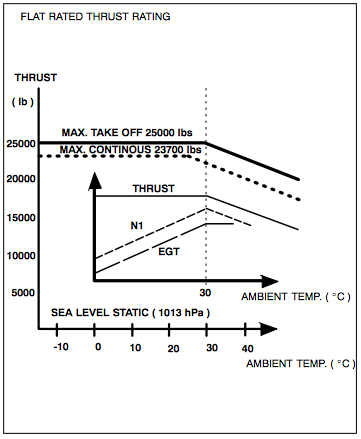 So, thrust is initially constant as inlet temperature increases, then decreases. It's a bit harder to predict what fuel flow will need to do to achieve this behaviour. It will certainly reduce in the temperature range where thrust is reducing, but in the cooler temperatures before that, it is probably increasing to keep thrust constant. As the chart shows, in this region EGT and N1 rpm are increasing. I expect fuel flow is probably showing the same behaviour as N1.

Thrust cannot actually be measured in flight, so most engines use either N1 rpm, or engine pressure ratio, (turbine exit perssure/engine inlet pressure) as a way to predict thrust. GE typically uses N1, whereas Pratt & Whitney and Rolls Royce usually use EPR. Using EPR is technically better, beacuse it will account for engine deterioration, where as using N1 assumes the fan mass flow remains the same for a given rpm as the engine degrades. But EPR requires 2 pressure measurements, which are less reliable, so most engines that use EPR have N1 control as a backup mode. See What is the difference between EPR and rotor speed as thrust setting parameter?

Not the answer you're looking for? Browse other questions tagged jet-engine temperature fuel-systems or ask your own question.

8
What is a flat rated engine?
5
What is the difference between EPR and rotor speed as thrust setting parameter?

7
What are the mass flow rate and exhaust velocity for a CF6 or GE90 turbofan?
17
Why is max endurance different for jet and props?
0
Can heat from the engine inlet be used to produce thrust?
6
What effect would a afterburner have on the compressor if the nozzle outlet is not increased?
12
How (and why) does engine thrust change with airspeed?
1
What is the relationship between EGT, Fuel Flow, N1, N2 and Air Temperature?
9
How does latitude affect the air temperature at 8 km altitude where planes fly?
6
Flex temperature isn't actually "fooling" the FADEC, right?
3
How do jet engines cool the gas in the combustion zone?
3
Why does a rocket engine increase power with speed if the burn rate is constant?