Is flow turning different from the Magnus Effect? If so, how?

The production of lift is much more complex than a simple differential pressure between upper and lower airfoil surfaces. In fact, many lifting airfoils do not have an upper surface longer than the bottom, as in the case of symmetrical airfoils. These are seen in high-speed aircraft having symmetrical wings, or on symmetrical rotor blades for many helicopters whose upper and lower surfaces 4-8 are identical. In both examples, the only difference is the relationship of the airfoil with the oncoming airstream (angle). A paper airplane, which is simply a flat plate, has a bottom and top exactly the same shape and length. Yet, these airfoils do produce lift, and “flow turning” is partly (or fully) responsible for creating lift. As an airfoil moves through air, the airfoil is inclined against the airflow, producing a different flow caused by the airfoil’s relationship to the oncoming air (my emphasis). PHAK pp.97-98

In what way is the "flow turning" being explained above different from the Magnus Effect (Bernoulli's Principle)? Are there any fundamental difference between the two? Aren't they the same in that they both use a speed difference in airflow between the upper and lower surface of an airfoil to produce lift?

When air comes into contact with a barn door or whatever at an angle, it will want to follow the top surface down (due to viscosity). Air will try to stick to the surface as much as it could, it usually fails above angle-of-attack of 15° or so.

When the flow sticks, the part exactly at the surface will have zero velocity. Above that part (layer) it will be a bit faster, and so on. Think of the layers within 2-3 cm of the top surface (that's the boundary layer).

Since the top most layer is the fastest, and the bottom is the slowest, the air will turn down (like a tank with different speeds for the different tracks).

The phenomena can be thought of as a force pointing down and causing the air stream to bend. With the airfoil's reaction being an opposite upwards force.

This downward motion pulls air from above and directs it down, causing the downwash. Bringing air from ahead and below is the upwash.

This rushing of air above the surface decreases the pressure, below the opposite happens but at a smaller magnitude. The end result is pressure differential and the air below pushes up toward the lowest pressure.

Above is considered flow turning, the turning may become more apparent when you look at what happens to the air by a passing airfoil. It is usually depicted like this: 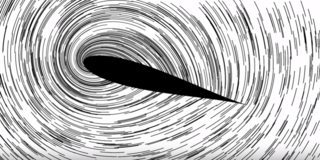 (Sources and more: allstar.fiu.edu, this video, and this video.)

Above is a different frame of reference of looking at how the lift is created. It has nothing to do with the Magnus effect. See PK's answer, both are lift, both can be described in many ways.

The Magnus effect is of usually a spinning cylinder or ball, where the top/bottom surfaces change the speed of the flow in opposite ways. For example, in a back spin, the top surface moves in the same direction as the air stream, further accelerating the air near the top surface and further pulling more upwash, etc.

Dynamic lift is always created by "flow turning", or more precisely, by adding some vertical impulse to the oncoming flow.

There are several and equivalent ways to describe this:

It is like with a boat, where buoyancy can both be described by the volume of water displaced by the boat or the static pressure acting over the wetted hull surface area. In all cases you get the same result, albeit in different ways.

In your case, "flow turning" is method 1 and Bernoulli is method 2. Both describe the same underlying process, albeit in different ways.

0
Is pressure lower than ambient on the pressure (bottom) side of an airfoil?

30
Principle of aerodynamic lift: are misconceptions also taught in flight schools?
5
How to read the pressure diagram of an airfoil?
6
What is the effect of flow separation on lift, pressure distribution and drag?
14
What amount of lift would be created in the fallacious “lift from equal transit time” theory?
14
Why does a stall decrease lift, rather than increasing it?
2
Aerodynamics moment of a wing
1
Why is the stagnation point on the upper surface before the start of circulation?
0
Will 3D wing has smaller drag than 2D at same AoA and airflow speed?