Is there a specific formula or way to calculate flex temperature for an Airbus A320?

I have hear of RTOW charts but I haven't seen any calculations with the runway length or slope. What is the formula or equation to finding flex temperature and V-Speeds?

The RTOW (regulatory takeoff weight) charts are runway and configuration specific, so the length and slope (and permanent obstacles) and all taken care of (see red box below).

There is no manual formula, either the charts or a performance calculator such as the Airbus FOVE or the company's proprietary software. 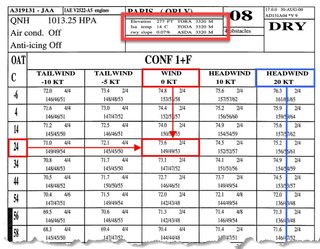 Source: Getting to grips with aircraft performance (Airbus via skybrary.aero)

Here's why there is no equation, from the Boeing book Jet Transport Performance Methods:

Here’s the complication: for the very first increment of time after engine failure, one second, we need to calculate the average acceleration in order to find the airplane speed after one second.

What they end up doing is iterative calculations and flight tests to come up with the graphs / tables.

Not the answer you're looking for? Browse other questions tagged takeoff airbus-a320 performance-calculation autothrust or ask your own question.

18
What are different types of weights of an aircraft?
7
How does the FOVE system work with the Airbus FMS?
6
What is RTOW and how is it different from MTOW?
3
Which one needs longer runway of an airplane between take off and landing for a constant weight?
3
Given aircraft and runway characteristics, how do you compute the maximum temperature for take-off?
1
How do I determine the engine thrust required to give a specific climb rate?

9
How can true altitude be calculated from pressure altitude, temperature and altimeter setting?
2
Is reducing V1 a viable option for pilots when the ASDA is shorter than the ASDR?
5
How does the flap configuration affect the tailstrike limit on the A320 aircraft family?
3
Why do DC-4 landing performance charts have different values for the intended and alternate destinations?
11
How can V1 and VR (rotate) speeds be calculated?
3
How to realistically model propeller static thrust?
0
What's the relation between speed of an aircraft and takeoff distance?
8
RATO used to get civilian aircraft out of airports with inadequate runway length?
1
What are the equations to compute takeoff and landing distance?