What could reasonably be done in case 7,500 airplanes must be landed quickly?

I read 5,000 to 10,000 aircraft are flying at a given time. There are several very unexpected but plausible reasons to land all planes quickly, e.g: a war / terrorism event; a giant volcano eruption); or a major meteorite impact

Whatever, in case there is a sudden need to stop flying, what would happen:

Is there any preparation for this kind of operation in some countries?

There's roundabout 400 paved runways over 2438 m (8000 ft) in the USA and EU, respectively, and about 200 or so in China and Russia, respectively, so that's about 1200. They are long enough to deal with most aircraft. Some might be untowered or unavailable, but then there are other countries, too. Estimates for "commercial" airports worldwide run around 4000 (there are about 9000 IATA codes, apparently).

So, every suitable runway would have to accommodate around 2 to 10 aircraft.

You can have around 50 to 70 movements per runway per hour, though you need separation of up to 3 minutes to avoid wake turbulence if a smaller jet arrives after a heavy. Let's say 30 landings per hour, and we're talking about 20 minutes, just in terms of pure runway capacity.

Now, to get all those planes lined up nicely... Parking might get crowded, too, but I'd think it would be doable - just fill up taxi ways progressively (presumably you don't care about take-offs for a while). See this diagram of aircraft parking prior to the Tenerife disaster (where many planes diverted to the small Tenerife airport due to a bomb in Las Palmas). 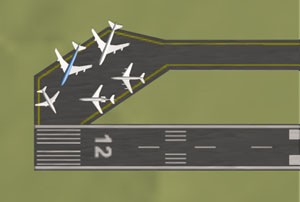 At any rate, the practicalities would be daunting. Would be interesting to see a proper feasibility study.

Say that around 80%, of those airplanes are GA flights (which they probably are); you would have around 6000 GA airplane flights based on your average number of 7500. Based on that number, it would be theoretically possible to stack quite a few landings concurrently à la Oshkosh. Given that three runways there can land and park somewhere around 8000 airplanes in a couple days (from 6am to 8pm), I would say that spreading that many planes out across all the airports in the world, you could ground almost all GA aircraft within an hour or so.

Note that this kind of operation requires a bit of set up and coordination, so it would probably take a longer to actually pull this operation off.

Commercial aircraft would take a bit longer though as a good number of them would be flying at cruise altitude from which it takes ~30 minutes to comfortably get down from. However, some of these aircraft would be in an over-water flight which would take maybe 4 hours to even reach a decent airport, after which it would have to get into the pattern which might toss on another hour or so to that.

Under the best conditions, I would say that to clear the skies would take around 4.5 hours, but it could probably take longer than that due to airplane concentration in certain areas and some people messing up their landings.

Not the answer you're looking for? Browse other questions tagged emergency-procedures or ask your own question.

9
What happens to en route flights when a major earthquake etc. destroys facilities?
0
What should be done in case of the avionics failure?