Why can the A320 VAPP be decreased down to VLS?

I read in the Airbus A320 FCTM (p349), normal procedures descent section:

The flight crew can insert a lower VAPP in the MCDU PERF APPR, down to VLS, if landing is performed without A/THR, without wind and no ice accretion.

You have no margin against a stall condition. Why is that possible to decrease VAPP till VLS?

... if landing is performed without A/THR...

Then theoretically you don't need the VAPP [setting] and should fly a bit faster, it's only a speed bug in this situation.

Even if the METAR is reporting an average of 0 knots, there is always a breeze here and there.

VAPP should be at least VLS +5 kt.

So VAPP even becomes 153 knots, 33 knots above stall. Plus the A320 by design has anti-stall measures if the flight laws are not degraded.

I want to start with a counter question? What does the regulations say about your landing speed? Does it say, it is Vls (lowest selectable speed) or Vapp (approach speed). You will find neither of these speeds. As a matter of fact, Vls is strictly an Airbus term. You would not find a Vls speed in any other type of aircraft or in the regulations.

The landing speed for a CS-25 aircraft (large aeroplanes), which is the category of Airbus A320 is Vref (Reference landing speed). Not Vls or Vapp.

According to FAA, Vref is defined as:

Reference landing speed means the speed of the airplane, in a specified landing configuration, at the point where it descends through the 50 foot height in the determination of the landing distance.

A stabilized approach, with a calibrated airspeed of not less than Vref, must be maintained down to the 50-foot height.

(i) In non-icing conditions, Vref may not be less than:

Vls as I have said before is an Airbus specific speed and in landing configuration, Vls is 1.23 Vsr0. If we look at the Vref definition above, we can see that when coming in for landing in any Airbus aircraft Vls = Vref. So, is there a problem in reducing the speed to Vls on final approach? The answer is simply no. If you look at the landing speed table in the A320 QRH (image below), you will see that Airbus has clearly mentioned Vls is Vref when landing.

The next part to clarify is that Vls is not the stall speed. It has a good amount of margin from it. Usually in the range of 1.23 to 1.28 times the stall speed, depending on the aircraft configuration and phase of flight. To give you a real life example, a few days back, we took off in a heavy A321 and in a turn as we retracted the flaps, the speed momentarily went below Vls. The aircraft did not stall and we made it just fine. It was a non event.

Now, let us look at the Vapp (approach speed). This speed is derived from the Vref. The Vapp is basically the speed that we get when we add some corrections to the Vref. Why do we add corrections? To compensate for things like gust and ice, so that we do not lose aircraft energy when for instance there is a sudden reduction in the headwind in a particularly gusty day. In A320, we also add about 5 knots to Vref, if the landing is done with autothrust on because sometimes the autothrust lags in reacting to changes in conditions which can deplete the air speed. We call these corrections approach corrections (Appr Cor). This gives us:

Here is how you determine the approach correction for A320 to get Vapp.

There are some circumstances where you are required to reduce speed to Vls during the approach. And one of them is when you have to do an overweight landing. The checklist for the procedure (attached below) asks you to reduce speed from Vapp to Vls when coming over the runway threshold. If you are an A320 pilot I am sure you would have done overweight landings in the simulator and in the final part of the landing, you would have asked (I hope) the Pilot monitoring (PM) to select speed and set Vls. This reduces the impact forces on landing as it reduces the kinetic energy of the aircraft. 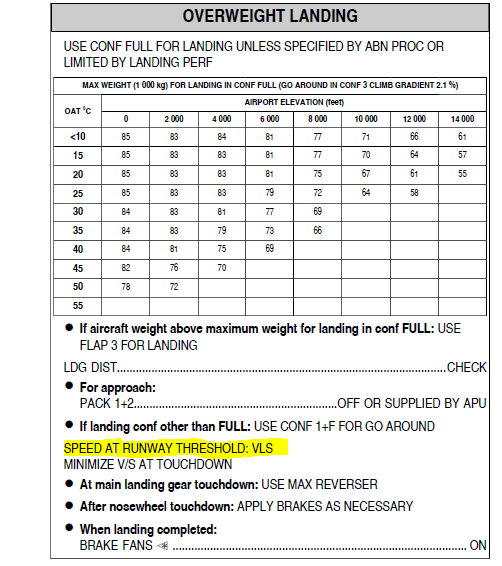 Not the answer you're looking for? Browse other questions tagged airbus-a320 sop fctm or ask your own question.

0
How can I go from a CPL to an A320 Rating?
4
Why is the A320 pre pressurised before take-off?
8
On the A320 why do we follow this particular sequence of taking flaps and gear?
2
What will happen if we start the A320 engines but we don't wait for the amber crosses on the E/WD to disappear?
9
Why would smoke enter the cabin if the batteries are switched off before the APU flap closes?
5
How does the flap configuration affect the tailstrike limit on the A320 aircraft family?
2
How can I find which engines are used on the different A320 weight variants?
9
Why does the flight controls check come before arming the autobrake on the A320?
0
Why is FL398 the REC MAX altitude on the A320?