Why does the wing root of the A330 have a pronounced twist? 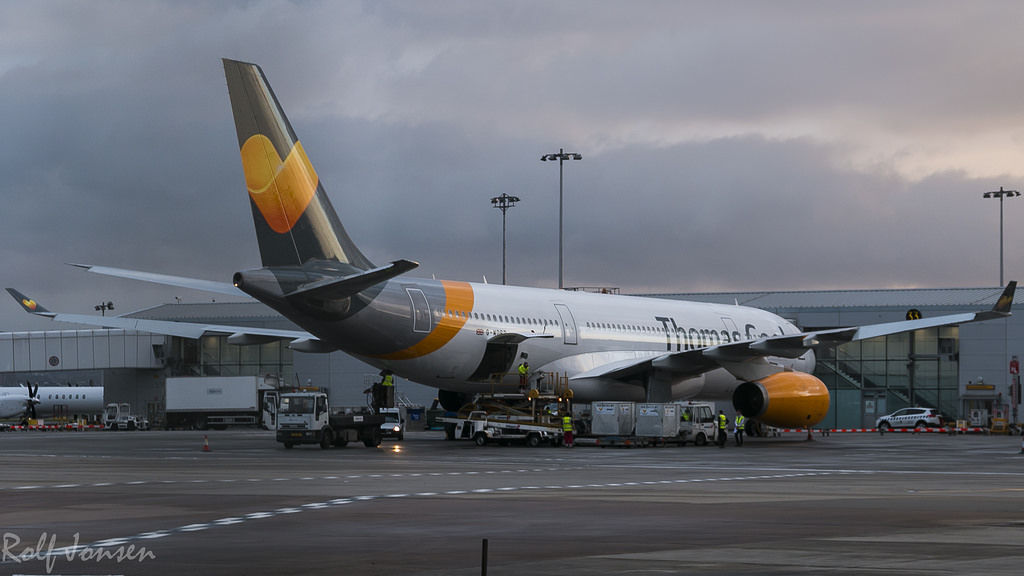 just wondering what the purpose of the pronounced twist on the Airbus A330 wing root is, I've noticed this on the 380 as well.

To create a funnel for all the air streaming towards the fuselage.

Air approaching a swept wing will be accelerated towards the area with the lowest pressure and, therefore, will be sucked towards the wing's center. The center itself will show a markedly different pressure distribution over chord than the two-dimensional flow over the same airfoil would because here the acceleration is much lower while the deceleration length at the end of the airfoil is compressed. If the swept wing has no twist and the same airfoil over span, a flow pattern similar to that pictured below will result: 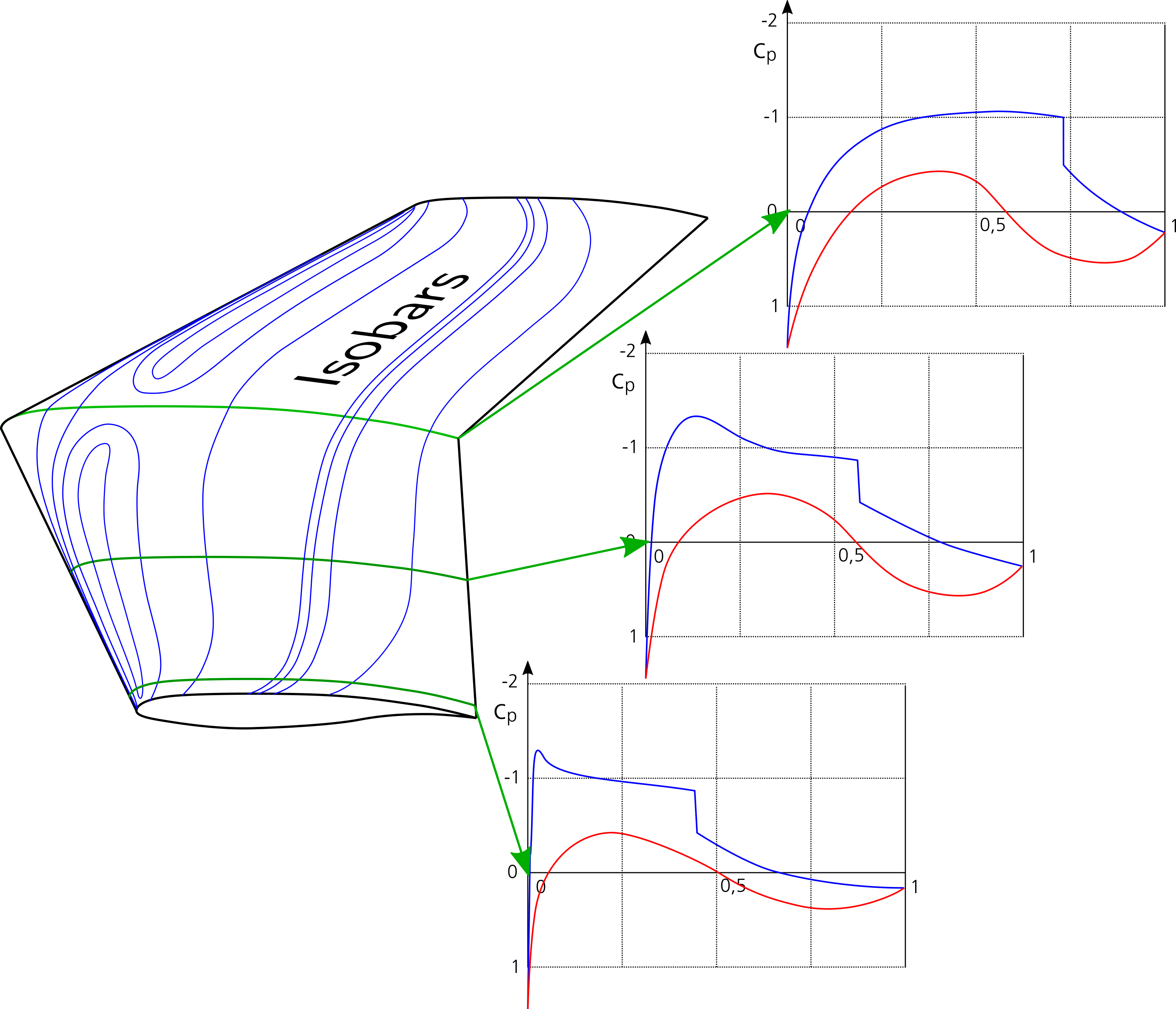 In order to maximize the achievable lift at transsonic speed it is desirable to modify this wing such that the isobars will run along lines of equal chord percentage over the full span. To achieve this, several tricks must be combined:

Thanks to @ymb1 who found a very illustrative picture of the A330 (shown below, source) the root twist becomes obvious: The root airfoil has visibly much less forward camber (negative camber, actually) and, consequently, a higher zero-lift angle. In order to produce a similar lift coefficient, the center wing needs a higher incidence to compensate for this change in airfoil shape. 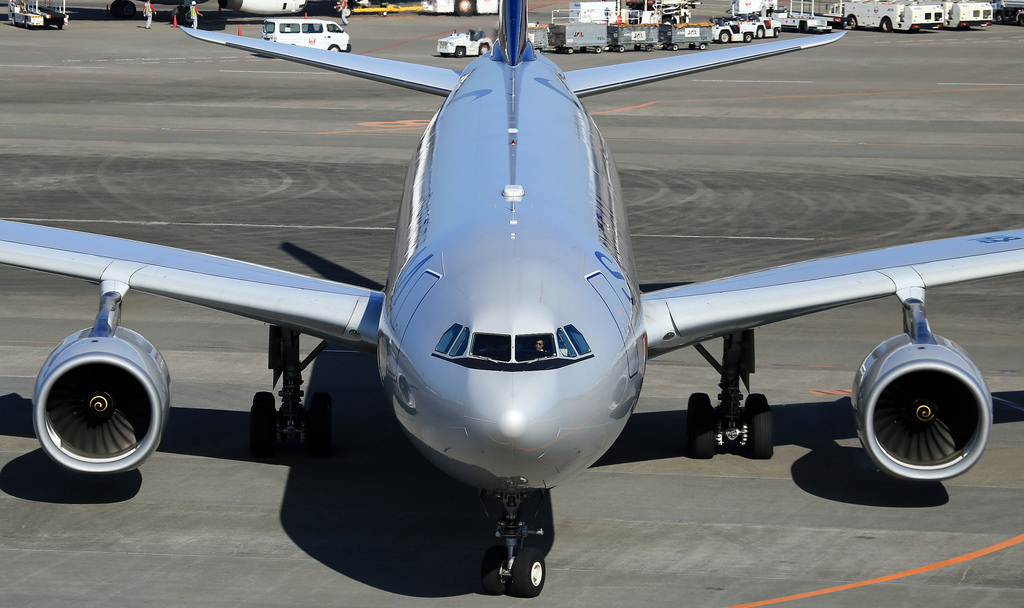 Another find by @ymb1 is this picture of Airbus root airfoils (source). The thick nose is easy to spot; it is needed to shift the suction area on the swept wing root forward so that the pressure distribution becomes more similar to the one of the airfoil at mid-span. Also, while the top has a long straight stretch, the bottom is rounded which in combination produces negative camber. The rounded bottom helps to maximize relative thickness. Since the chord at the center wing is increased, the local lift coefficient can be smaller than on the mid and outer wing and still carry the same circulation for low induced drag. What is saved in lift is added in thickness for structural efficiency and for stowing the landing gear. The lack of rear loading (= high local camber in the rear airfoil section) helps to gain the needed volume for the landing gear bays.

Here is another one, this time an English Electric Lightning F.1. The reflections on the leading edge show nicely how it is pulled down at the root with plenty of nose camber there. This being a design from the early Fifties, this nose camber is used to give the wing better stall behavior and isobar shaping was not yet practised. Note that the local incidence has not been increased at the root.

Not the answer you're looking for? Browse other questions tagged aerodynamics airbus airbus-a380 plane-construction airbus-a330 or ask your own question.

11
What is the purpose of a wing Yehudi?
20
Why is the trailing edge sweep angle smaller at the wing root?
8
Where is the spanwise flow? How does the span wise flow point the air towards the wingtip?
9
Are there any fly-by-wire airliners with negative or near-neutral pitch stability?
2
Do horizontal stabilisers provide any lift?
4
What is the pressure on the pressure side in relation to the freestream?
1
Is/why isn't the Antonov 124 to 225 wing upgrade method common?
2
Why does the effective alpha/CL increase at wingtip of swept wing?
2
Swept back wing theory
2
Which airfoil to use for high subsonic flight?
See more linked questions

27
Why does the DC-10's horizontal stabilizer have such a pronounced dihedral?
6
What is this tube-like thing protruding from under an A330's wing?
16
Why is the horizontal stabilizer root interface designed this way?
4
Does the Reynolds number on a smaller model need to match the one of the original aircraft?
4
Why does Airbus continue with the A330-800neo despite only having 6 orders?
7
Did Airbus do anything about Qantas Flight 72?
2
Does a biplane need wing twist?
38
Why can't an Airbus A330 dump fuel in an emergency?
2
What is the difference between an Airbus A330-200 and an A330-243?