What is the geoid undulation used for in aviation?

In addition of the altitude found on aerodrome information, the French AIP also mentions the value of the geoid undulation::

Geoid undulation is also found in Belgium, Switzerland, Poland, Morocco, Qatar, Sweden... AIP to name the ones that appear on the first pages of Google results.

US FAA on its side mentions the ellipsoidal height directly.

On the figure below:

A GNSS receiver determines the ellipsoidal height $h$, and can display the orthometric height $H$ by adding/subtracting $N$ from grid values embedded in the device.

As already explained, in aircraft equipped for IFR, GPS height is not displayed. It is used in EGPWS, but whether that has the map coded with geoid heights and a separate geoid model, or whether it has the map coded directly in ellipsoid elevations is implementation detail of the EGPWS.

However, ultralights may not be equipped with standard instruments and many pilots complement what little they have with GPS units. These are often simple hand-held outdoor units that may not have geoid model in them and thus may show ellipsoid height instead of geoid height (= altitude above sea level).

So my educated guess is that the geoid undulation is published for the benefit of ultralight (including paraglider; also balloon etc.) pilots flying with GPS. 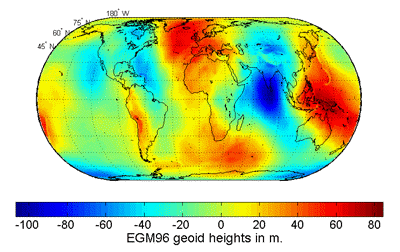 Earth gravity is not uniform due to the non-uniform distribution of mass/matter. Above is the standard model used to describe the undulation (up/down differences) of the geoid: Earth's sea surface's shape based on gravity and rotation (winds and waves are unaccounted for).

GNSS satellites orbit around Earth's center of gravity (a single point). So there will be differences between what a GNSS measures based on its model of the Earth (based on this single point: ellipsoid), and the actual.

Not all countries adhere to the standard above, hence the difficulty is agreeing to a model. GNSS devices use look-up tables to correct for the difference (the two spheres in your post are the difference between what the satellite sees and what it should see).

Cockpits show neither to the pilots. They use indicated or pressure altitudes/levels that work on the barometric pressure.

For cockpit indications: GNSS systems can't substitute for pitot-static measurements because everyone needs to have the same system and have a reliable refresh rate that is independent of external sources. As the image below shows, a pressure based altitude/level is also undulating due to the non-uniform surface pressure and lapse-rates. Planes fly up and down in level flight but it's hard to notice. 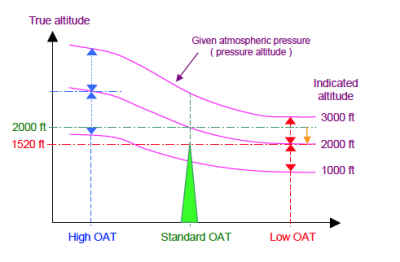 For charting the terrain: Whichever system a country uses to mark the terrain on its charts, they will state the source in the AIP, as you've demonstrated. For the geoid, countries may even use different models as I wrote earlier.

The good news is each local station will correct the QNH based on the sea level pressure based on the country they are in.

821 ft is the 'H', which is the above MSL elevation after taking into account the geoid. 'h' is what an uncorrected GNSS receiver measures (982' in that picture), and needs to correct by 'N' (161'). Positive undulation is removed since it's above the 'ellipsoid datum'.

What is it used for?

Not used in the cockpit. It is used for local charting (standards differ from place to place; AIP's mention the source).

If an aircraft is 35,000 ft above Saint Exupéry airport, then this gives two possible horizontal positions, which for aircraft can be very distant.

No. But I have to explain why. There is no diagram online to explain it since it's a no, so I made my own erroneous diagram. 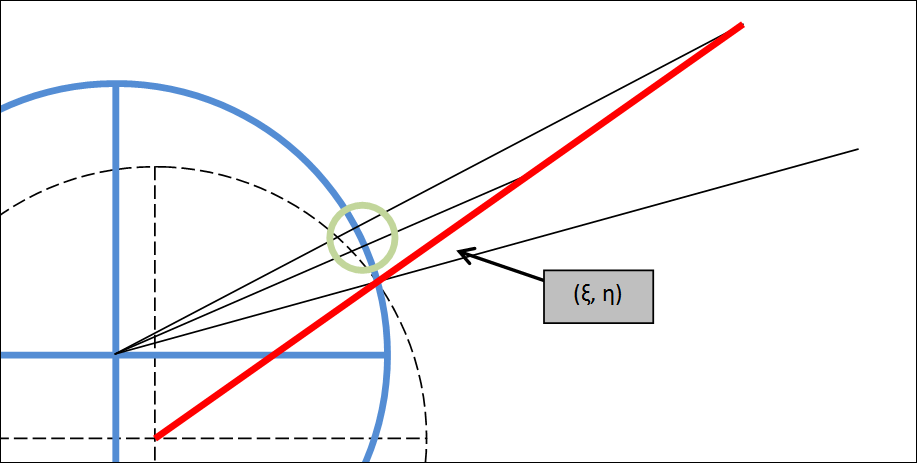 Deflection of the vertical:

Imagine a table with non-uniform legs, such that two opposite corners are at on the same level, and the other two are not. If I place a ball on that table, it will move toward the lower corner.

If I want to measure this table's level against the ceiling/ground, I will need two vertical angles, one north-south and one east-west. If we had one angle, we wouldn't know the level's direction. That's why two angles are used.

Measuring this deflection is a key element in knowing the undulation (it changes from location to location). That's the angle that is causing this confusion.

Now imagine yourself on top of a monument, this monument has x and y ellipsoid coordinates. You then attach yourself to a weather balloon and climb straight up (with reference to gravity). Your handheld GNSS receiver will not show different x and y values for two reasons:

The undulation is a correction for the z, it does not shift your [physical and measured] present location regardless of altitude. If the height (red line) is straight up from the monument, then left and right of the red line are different undulations for different locations.

Note that I couldn't draw the erroneous normals on the other side of the red line if I wanted to.

Check this article: How do GNSS-derived heights differ from other height systems? It explains where high accuracy is needed, and the issues that may arise when two countries with different geoid systems decide to build a bridge between them.

As @JanHudec mentioned, EGPWS needs the correction because its model is ellipsoid. So country x needs to have a system by which they measure the geoid, its undulation, and report to the aviation industry the correction. That's why when an airport is not in the database, the pilot gets, "caution, terrain," when they are on a good approach.

Another application is minimizing the drift of the inertial navigation systems, since they inherently indicate the astronomic vertical. It's cheaper to just correct the drift via the GNSS such as on the Boeing 787 (align-in-motion).

As a pilot, everything is referenced to the altimeter, or the radio altimeter below 200 feet AGL. It is understood that “GPS Altitude” is somewhat close but won’t exactly match up, but that’s as far as we care.

For military pilots doing targeteering (on the ground, pre-mission), they may well get fairly deep into this sort of thing, but in the airline world, it’s all & only about your altimeter in the panel in front of you.

Not the answer you're looking for? Browse other questions tagged navigation altitude gnss or ask your own question.

13
Which is more accurate for height measurement: GPS or barometer?
6
Does density altitude affect actual altitude?
7
How can aircraft determine true north for inertial navigation systems?

24
What does the term “trimming” most commonly mean in aviation?
12
What vertical flight profile could be expected from an aircraft if the pilots were incapacitated?
6
Why is port-starboard terminology used in aviation?
19
What will happen if satellite navigation fails?
8
LPV/LP approach (RNAV with WAAS): What is actually the “channel number”?
13
Which is more accurate for height measurement: GPS or barometer?
1
What are the WAAS requirements for RNAV (GPS) approaches?
3
What did Fiji have to do when it incorporated GPS into its aviation system?
2
What is the difference between RTK GPS and GBAS?