How does 220 kN of engine thrust create the 700 kN required to maintain the altitude of an A320? [duplicate] 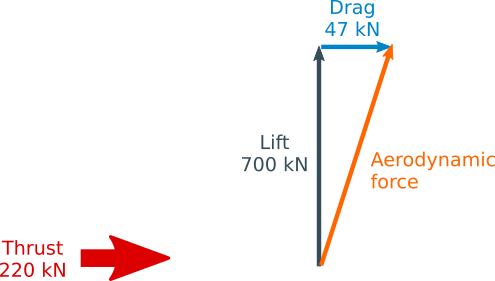 I can't produce any equations, but the forward motion is what creates the lift. If you had a completely drag-free glider and no wind it could stay in straight flight forever with all forces in balance. Gravity counters lift. And no drag, so no thrust. The reason it must eventually come down is because the drag force slows it down. Less speed equals less lift. In a powered plane the thrust simply needs to balance against the drag. Then all forces are in balance again, so the only force the engines need to balance is the drag force.

The engines only need to overcome the induced drag to remain in the air, which is a result of the lift but usually much smaller on the order of 1/20 for a modern jet. This ratio is specified as lift to drag or L/D. It is a vital performance statistic of an aircraft. Why? Wings are weird and complicated, there is not a simple 100% correct answer.

Only a rocket needs thrust equaling gravitational force since it has no wings! (L/D = 1/1)

the two engines produce about 220 kN in cruise

In any straight-and-level flight regardless of altitude, thrust = drag. Except if the flight is too slow with a high nose up then some of the thrust counters the weight, but for all intents and purposes, assume they are the same and you won't be wrong.

L/D is not a fixed value too. It changes with speed.

At low altitudes the drag is higher (denser air). In cruise the true airspeed is higher. Lift depends on the true, and not the indicated, airspeed. That's how less thrust can do more lift up there where the air is thin and the plane can reach fast true airspeeds.

The form of velocity applicable to the lift equation is the true airspeed. True airspeed is defined as the actual speed of the aircraft through the air and includes corrections for density, compresibility, and instrumentation error.

The main issue: The pulley system (now removed from question) is a one-body problem, an airplane is a two-body problem (airplane and air). The air does the lifting.

18
Why is lift larger than thrust?
5
Can this design provide more lift force than thrust from engine?

9
Comparing the Lilienthal and Wright gliders, which one had a better glide ratio?
5
For a large commercial plane on landing, does the L/D ratio increase, decrease, or not change much?
3
What is the relation between airspeed and generated heat at constant drag?
5
How to calculate the power required during transition from VTOL to fixed wing?
2
How do changes in flight affect L/D max and the speed at which I must travel to maintain it?
1
How much force is produced by control surfaces?
1
Does distributed propulsion create unwanted lift at cruise speeds, requiring a negative angle of attack?
0
Zenith-Add horsepower, NASA-add drag: to create lift. How is this possible?
1
Are there any situations where having high lift but low lift to drag ratio would be beneficial?
0
Why does power help us maintain altitude in slow flight?