How does a fixed-pitch propeller changes the blade's angle of attack?

Question answer and explanation for source: 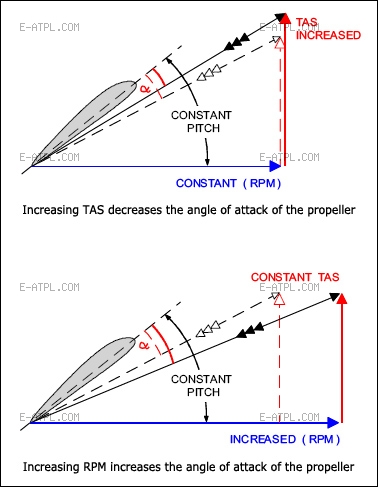 In your graphic, the blade is attached to a plane that is flying up the page. The blade is sticking out of the page and is being pushed to the right by the turning engine.

At some combination of airplane speed (up the page) and propeller speed to the right, the air would flow exactly along the (fixed) pitch of the blade.

Now, without immediately changing the speed of the plane you increase the RPM. The blade moves to the right more quickly. The angle of attack it makes in the air increases.

Put your hand out a car window. Hold it at a fixed angle relative to the ground (say 15 degrees). Now, holding the angle constant, move your hand downward rapidly. The pitch has not changed, but the angle of attack has. This is the equivalent of increasing RPM.

5
How does the relative wind on a propeller, strike the blade from behind (the non camber side)?