Can this design provide more lift force than thrust from engine?

The problem is depicted in the picture: 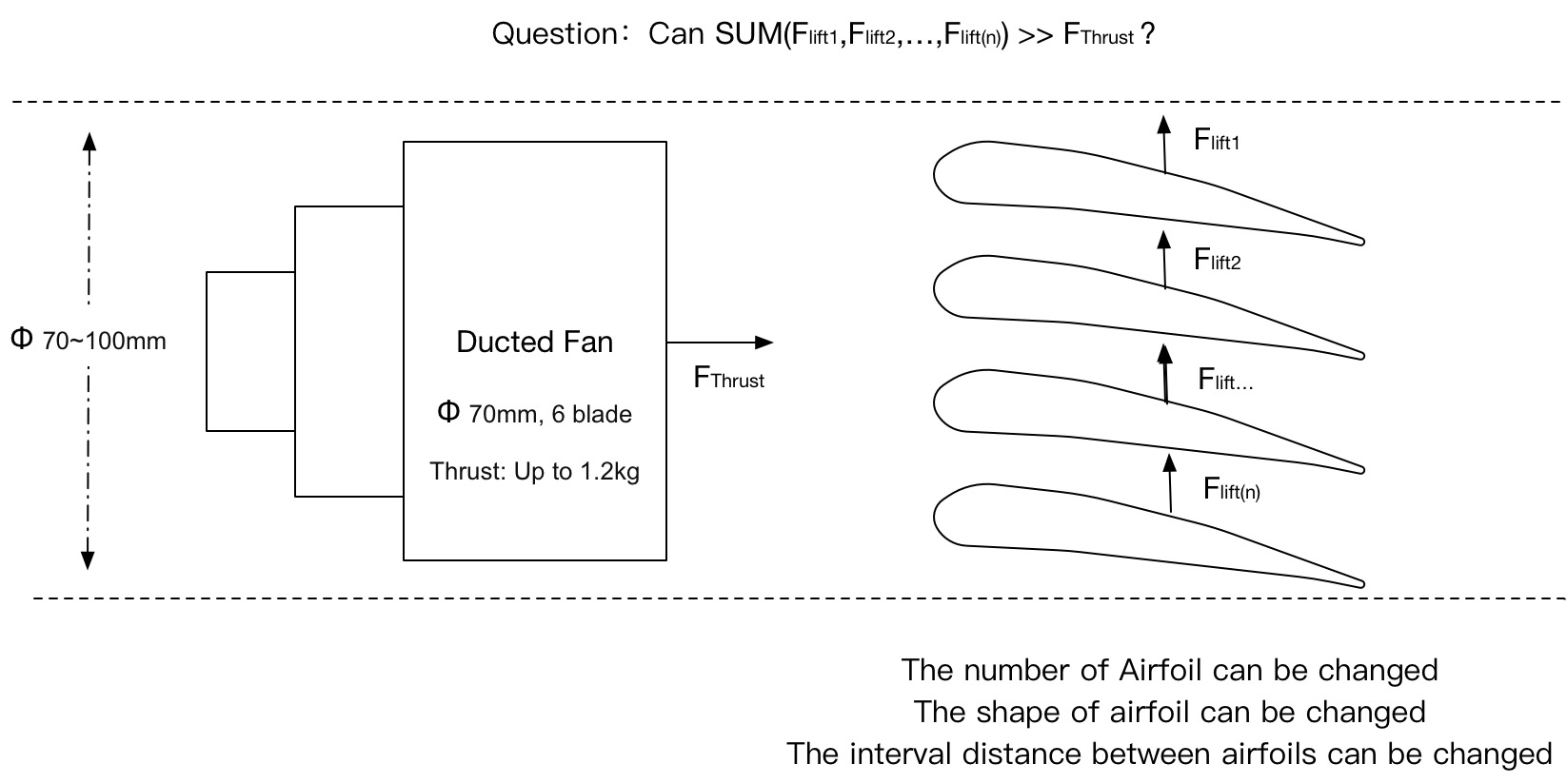 Generally, why we don't use engine blow wings to fly? Can we use wind-tunnel-like wing to generate lift force?

Can it generate more lift than thrust? If it can, how many times?

Because there is no free lunch. A single wing behind a propeller or a fan can see some amount of performance gain from being in the propeller's slipstream, but, when you start stacking multiple wings together...it gets a little trickier.

A single wing can get an advantage from the swirl induced by the propeller, in addition to the increased speed you've remarked upon. In a thesis written by LLM Veldhuis on wing propeller interactions, he notes that, when you have a propeller operating in front of a wing and rotating such that the inboard blade is always moving up, it changes the local angle of attack on the wing behind the propeller. This modifies the lift distribution (notionally shown in the figure below) and ultimately decreases the induced drag of the wing for a given operating lift coefficient. A set of experiments by Witkowski et. al. (Propeller/wing interaction) in the 1980s recorded a wing seeing up to 40% savings in induced drag based on the adjustment of a tractor propeller's rotation rate! 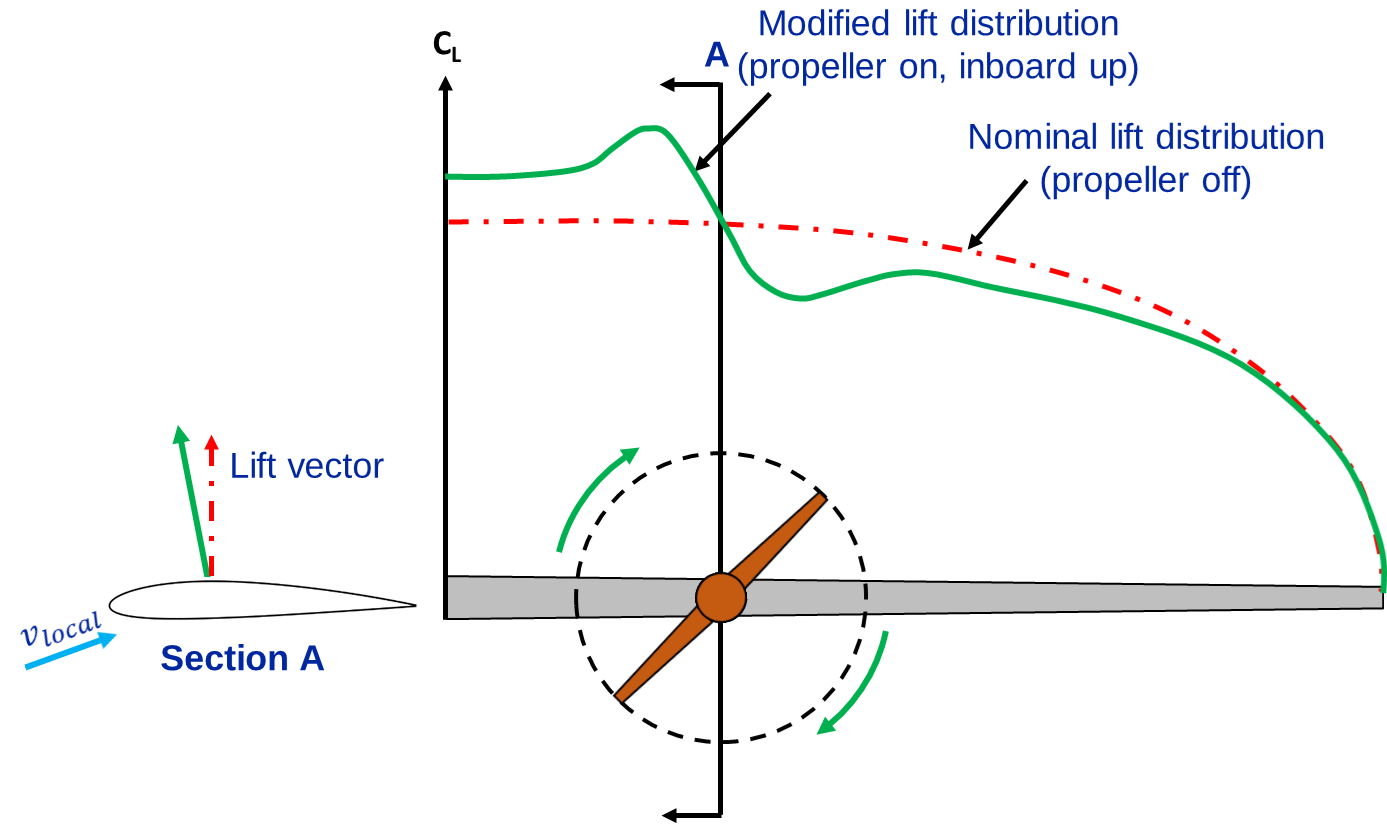 This is what I've, at least, seen cited at the most prominent effect of having a tractor propeller in front to of a wing. If you have a small enough wing, though, say on the scale of UAV, there's a good chance you could have a significant portion of your wing in the propwash, which can keep the flow attached to the wing at higher angles of attack, letting you, potentially, keep a control surface or two unstalled and able to maneuver the aircraft when they normally wouldn't.

However, that's not lift, and it doesn't quite answer the question about the multiplane setup. The problem with stacking wings so closely to each other goes back to investigations in the 1920s and can be most easily explained, I think, with the venturi effect. When air is accelerated by the curvature of a wing, the static pressure decreases and you can a suction force, which, on the upper surface of a wing, translates into lift. However, stack two wings (or other objects) closer together (as in the picture below), and you get something...not so good. The image below is from a conceptual rotorcraft design submitted by the University of Maryland for the 2016 American Helicopter Society Graduate Design Contest and is a kinda strange thing called a quadrotor-biplane-tailsitter (we named it Halcyon). However, the upshot of the image (which is colored by local pressure -- the more negative the Cp, the lower the pressure) is that, due to the wings and fuselage (the bit in the middle), you are playing a game of diminishing returns. 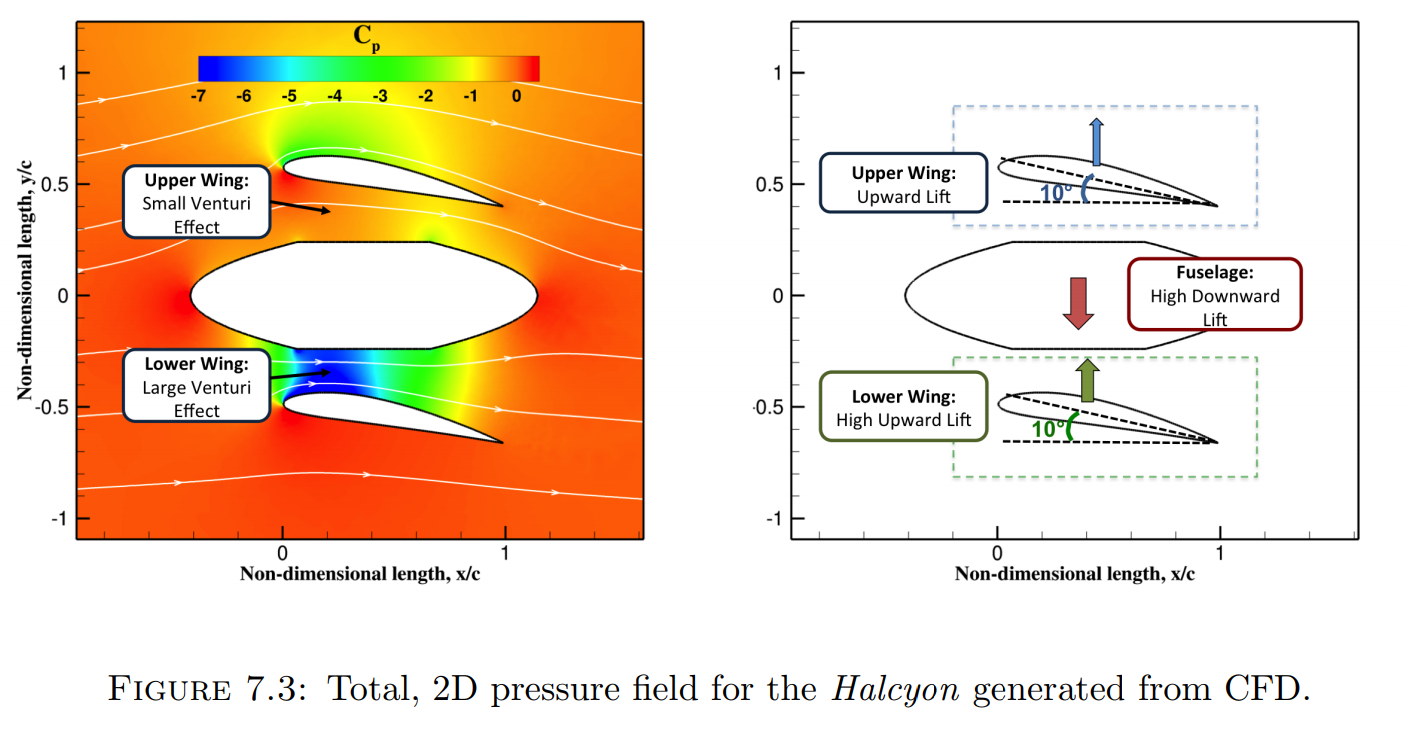 While the bottom wing sees very high velocity air going over it, leading to very high lift, that same low pressure zone also generates a strong downforce on the fuselage, effectively mitigating a lot of your lift (the design team estimated that it killed almost all of it, actually) from the lower wing. The upper wing, since there's a little extra space, isn't as effected by that same phenomenon, so, in the end, the aircraft had enough lift, in theory, to fly...but it's not an efficient configuration at all. The same would be true for a stack of wings. In a 1923 paper by Max Munk entitled General Biplane Theory, he estimates that, in order to minimize interference effects between wings, they should be spaced apart by at least 3 chord lengths. That would easily move your wings so far apart that not even two wings could easily stay in the propeller wake...at least for full size aircraft.

Fist, I find it odd that your fan lists its thrust in the unit of a mass. Thrust should be a force, not a mass. Now let's assume that this means the thrust is equivalent to the weight force of this mass in the gravitational field of earth (g = 9.80665 m/s²) and we get the actual thrust of 11.768 N.

Unfortunately, jet contraction means that only a small part of the wing behind the fan will experience this airspeed. Generally, lift is created by a wing by deflecting the air downwards. Normally, a big mass of air is deflected by a small amount, because this results in the best efficiency. If you insist on using a smaller wing and a higher deflection angle, efficiency will suffer. The number of wings will not affect the result - a single wing will create as much lift as any stack of multiple wings, only with less friction drag.

Why is that? Lift is caused by deflecting air, and this deflecting is done by a pressure field that needs suction on the top surface of the wing and overpressure on the bottom surface. In a stack of wings, the suction of the lower wing will also act on the bottom of the upper wing, so in effect only the suction on the topmost wing and the pressure below the bottommost wing will add a net amount of lift. It's better to reduce that stack to a single wing where every surface can contribute lift.

If you want as much lift as thrust is created by the fan, the wing would need to deflect the exit stream completely downward, by 90°. This is far above any realistic value for a wing (or a stack of them). It will be better to place the wing at some distance from the fan exhaust. Then the exhaust stream will suck in air from the sides, so the mass of air being thrown at the wing will increase while its speed will decrease. Now the same lift can be created with less flow deflection, but still the possible lift will be lower than the thrust of the fan.

Next, your airfoil shape sucks for this application. You want maximum deflection and have a fixed angle at which the air hits the wing. Thus, you can afford a small leading edge radius and need a lot more camber. Like the airfoil of a Fowler flap! In order to increase the deflection angle, it will help to add a second flap with a gap between the two. And a third. This has been taken to its extreme by Frederick Handley Page in 1921 when he modified an RAF 19 airfoil with 7 slots for maximum lift, such that a staggered configuration of 8 airfoils resulted. Note that the airfoils are not at the same streamwise location but each sits below the wake of the preceding airfoil. 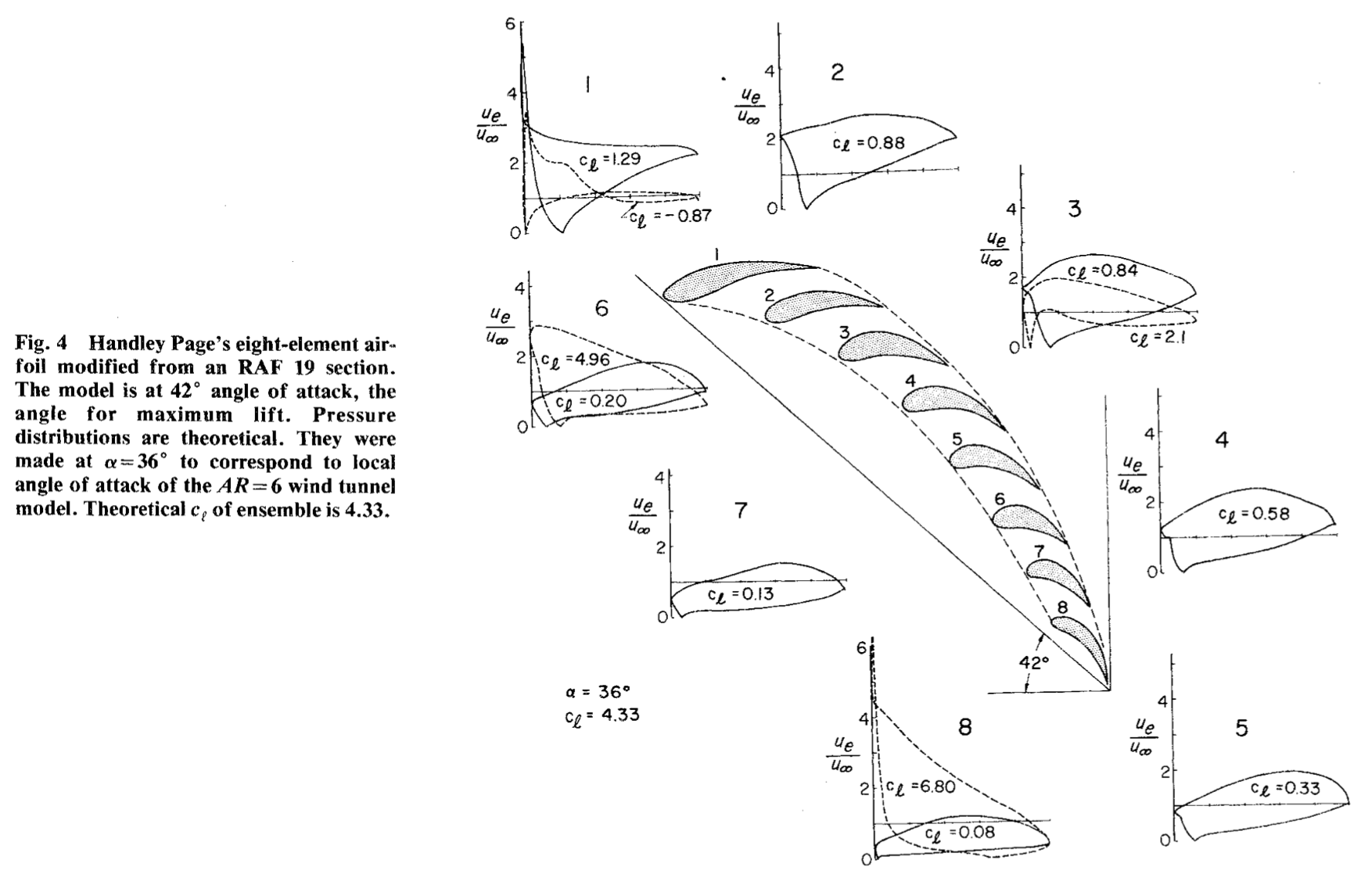 Handley-Page 8 element airfoil, taken from this paper by A. M. O. Smith, McDonnell-Douglas)

Now it must be said that deflecting the flow will incur drag. If the flow is turned by 90°, even under ideal conditions will the drag be at least as big as the thrust. If you draw a box around the fan-wing combination and integrate over the edges, you will find that no horizontal component is left in the exiting airstream, so no net thrust is created by this contraption.

Wouldn't it be better to swivel the fan to 90° in order to use its thrust for lift?

If you use the fan thrust to move the fan-wing combination though air, then the wing can work on all the air that is coming at it. Make it big and move fast enough and lift will indeed be larger than thrust. To improve efficiency, replace the fan by a decent propeller and compare the result to the status quo.

In order to maximize the lift potential of the accelerated air stream of a fan (or propeller), blown wing designs showed superior low-speed capabilities as long as the engines were running. One example is the Custer Channel wing as used on the CCW-5 shown below (source). 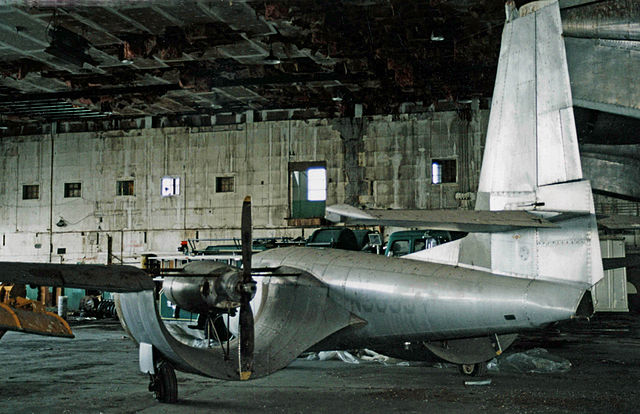 Another example is the Boeing YC-14 experimental tactical transport aircraft shown below during construction with the blown flaps fully extended (source). 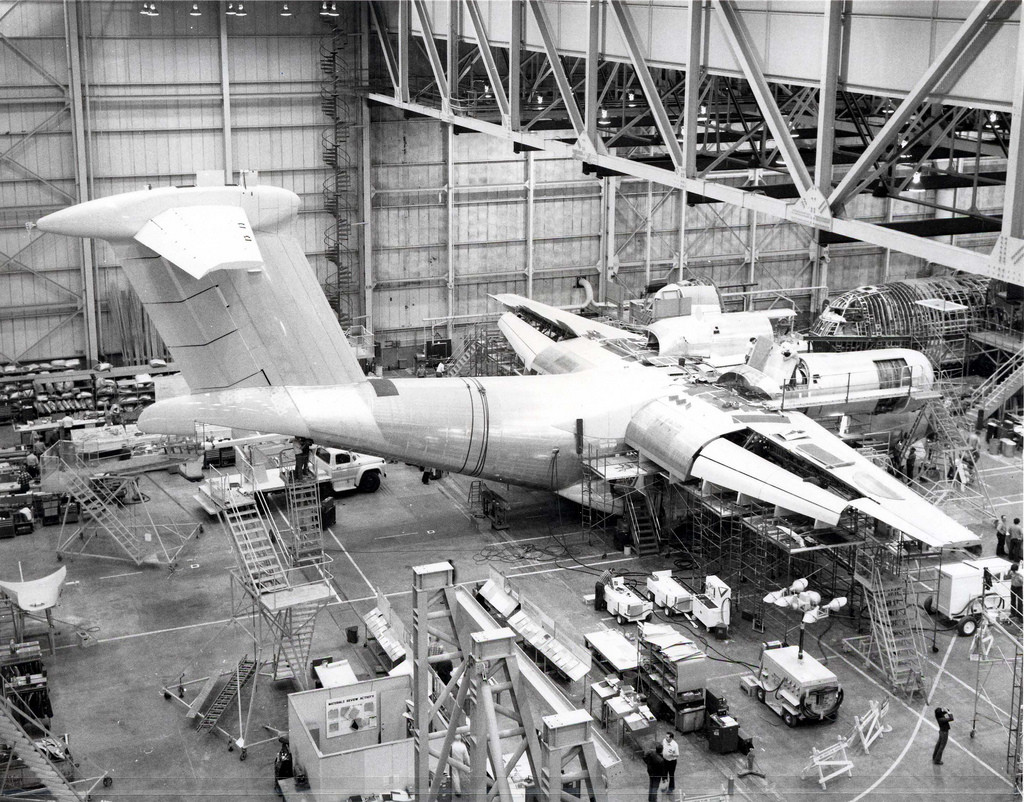 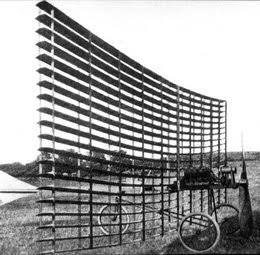 The lift from the airfoil generates is from behind your CG, so your mass in front pushes the nose down and the tail is raised by the wing, which means your plane will tip forwards (downwards). Also the wing interference thing everyone else’s already mentioned. Also turbulent air is not very useful for lift and bad for control

Not the answer you're looking for? Browse other questions tagged aircraft-design wing airfoil wind wind-tunnel or ask your own question.

20
Could a blown wing ever be powerful enough to lift an aircraft at zero forward velocity?
18
Why is lift larger than thrust?
27
Is there any equation to bind velocity, thrust and power?
11
Why do airfoil's trailing edges point downward?
15
What is the propeller efficiency, $μ_p$, of modern propellers for light sport aircraft?
9
Is induced drag essentially nothing more than a specific type of form drag?
11
Does the downwash created by induced drag increase or decrease lift?
1
How does 220 kN of engine thrust create the 700 kN required to maintain the altitude of an A320?

7
Why don't all wind tunnels use magnets to suspend models?
18
Why do modern jetliners provide Thrust Reversers at all in their design decisions?
8
Is there anything wrong with this more symmetric aircraft design, and why isn't it used?
9
How are wind tunnels used with scale models?
95
Are wings any more efficient at creating lift, versus orienting the engine's thrust downwards?
0
How do we derive Lift Coefficient of an airplane's wing?
3
How to artificially increase the Reynolds number in a wind tunnel?