How does an aircraft tailplane work?

It is possible to talk of stability only after having defined an equilibrium point around which the stability is studied. An aircraft is in equilibrium if the forces and moments it experiences are balanced. Using a simple model for the longitudinal analysis, it can be decomposed in three relations called the trim equations. In order to keep it simple, it will be assumed here that the angle of attack and the flight path angle are zero. (Note that the same reasoning can be achieved with non-zero values but the equations then become quite messy.)

These three equations are:

where $L$ is the total lift, $mg$ is the weight of the aircraft, $T$ is the thrust, $D$ is the drag and $M$ is the pitching moment around the centre of gravity of the aircraft. The second equation won't be studied further since it does not help to understand the role of the horizontal tail and its influence. Looking at the following picture, one can see that usually, the centre of gravity and the point where the lift applies (called the aerodynamic centre) are not the same. This means that the lift generated by the wing creates an induced moment around the centre of gravity that one should add to the already intrinsic pitching moment due to the main wing (usually a pitch down moment for conventional airfoils). 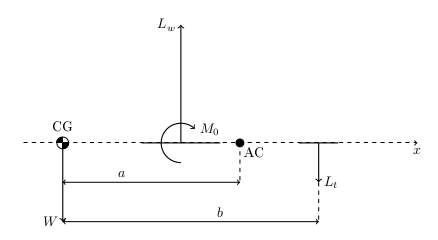 Knowing that, it is possible to rewrite the two equations of interest including the contributions from the main wing and from the horizontal tail.

From these equations and the figure, it appears that the horizontal tail is used to generate a lift which induces a moment helping to balance the moments equilibrium and thus prevent the aircraft to spin on itself (pitchwise).

From both the figure and the equations it turns out that the lift contribution from the tail is usually negative, meaning that more lift from the main wing is needed to keep a trimmed (or balanced) aircraft. This drawback can be overcome by the use of a canard configuration instead.

The same can be done for the lateral equilibrium and stability but there it is the vertical tail that is used. It is symmetrical so that there is no yaw induced and if there is some side force experienced, it will create a moment in order to reduce the side-slip angle.

Comparison of Lift Created by the Tail and Main Wing

For a trimmed configuration, it is easy to see that the lift created by the main wing is more or less the one created by the tail plus the total weight of the aircraft, which gives an idea of the difference between the two forces.

There is nothing really wrong with the existing answers, but I feel that they don't really dig down to the core of the issue. But it is actually not so complicated ...

All that is required for static longitudinal stability is a lower lift per area on the horizontal tail than on the wing. Downforce on the tail helps, because then the lift at the tail is obviously lower than on the wing, but is not necessary. What counts is that the relative lift change at the rear lifting surface due to a change in the angle of attack of the whole airplane is higher than the relative lift change on the forward lifting surface. The mechanism is the same for conventional configurations, canards or even flying wings. 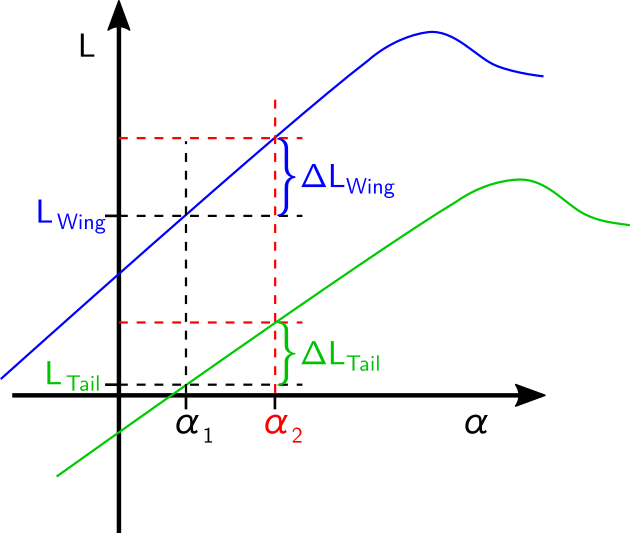 Say the airplane flies at the angle of attack $\alpha_1$ and is disturbed by a gust or a sudden control input, such that it assumes a higher angle of attack $\alpha_2$. Due to camber and a higher incidence, the lift curve of the wing (blue line) is shifted up relative to that of the tail (green line). Also, the downwash effect and the lower aspect ratio reduce the lift curve slope of the tail relative to that of the wing.

Now assume that the aircraft was trimmed in state 1, such that the moment from the small tail lift was equal to the moment of the much larger wing lift around the center of gravity. In state 2, the absolute lift change ∆L on the wing is much smaller relative to the lift at state 1 than on the tail, such that the resulting moment change produces a pitch-down moment. The same happens with a reduction of the angle of attack in state 2, only in reverse.

If the lift ratios would be equal for wing and tail, the balance of moments would not change between state 1 and state 2. But since the tail experiences a higher relative lift change, a moment change follows which works against the change in angle of attack.

A wing with a conventional aerofoil profile makes a negative contribution to longitudinal stability. This means that any disturbance (such as a gust) which raises the nose produces a nose-up pitching moment which tends to raise the nose further. With the same disturbance, the presence of a tailplane produces a restoring nose-down pitching moment, which may counteract the natural instability of the wing and make the aircraft longitudinally stable (much the same way a windvane always points into the wind). (From the Wikipedia page on tailplanes)

The tailplane does not produce any lift. You could say it produces a 'Negative Lift'. The reason many early aviators were killed is because the tailplanes produced lift in order to help the plane fly which would result in unrecoverable nose-up tailplane stall. Most modern aircraft are designed so that when the airflow decreases, the effect/momentum produced by the tail surface is decreased as to prevent the previously mentioned condition

The wings(which has a aerofoil cross section ) produce lift (basically a force that acts opposite to weight) which act at a distance from center of gravity (C.G) so the force gets transferred to C.G. as a force and moment(in clockwise direction) which lead to pitch up movement

To balance that moment tail are used the tail produce lift (small compared to that produced by wings) so if we transfer it to C.G. an force and moment (since it produce less lift it should be placed far from C.G) this moment acts in anticlockwise direction thus neutralizing the moment due to wings ...Thus making the aircraft stable ...

The absolute value of the lift generated by the tailplane varies and depends on the phase in which your plane is in that moment:

Due to the fuel consumption the weight of the plane reduces while flight. This may change the position of your center of gravity and this in turn will affect the absolute value of your lift/drift. Usually |drift| increases, in other words, while flight the lift of the tailplane decreases.

Some words to stability: Just think about equilibrium of moments.
The center of gravity is near the main wing. The high lift of the main wing is very near to c.o.g., the drift of the tailplane is rather far away from it. The sum of all moments equals zero, they will balance the plane if there are gusts etc.

Not the answer you're looking for? Browse other questions tagged aerodynamics aircraft-design or ask your own question.

6
What is the function of the tail section on a fixed-wing aircraft?
0
How does a horizontal tailplane stabilize a cambered airfoil aircraft?
30
How do conventional and T-tails differ?
15
Are there advantages when operating with CG near forward or aft limits?
9
Do all aircraft need to have horizontal and vertical stabilizers?
8
Can a plane with 2 sets of shorter wings fly?
10
How exactly do the Beechcraft 1900's stabilons work?
9
Are there any fly-by-wire airliners with negative or near-neutral pitch stability?
5
Why aren’t there any lifting-canard airliners?
7
Why does aircraft stability increase when it transitions from subsonic to supersonic flight?
See more linked questions

12
How can we recover from a tailplane stall?
18
Why are high-wing aircraft more stable?
11
How does the slotted flap work?
2
How does distributed propulsion work in a pusher configuration?
5
Does the tailplane have a positive/negative camber?
1
For subsonic aircraft, would adopting a higher wing loading decrease drag?
0
How does the aircraft keeps propelling forward when airflow and thrust are not aligned?
3
How does the 'efficiency' of a magnus effect flier compare to helicopters and fixed wing aircraft?