Is reducing V1 a viable option for pilots when the ASDA is shorter than the ASDR?

This question has a context. People discuss the effect of a runway length on V1 on this post and seem to agree a runway length has no bearing on V1. In other words, however long runway you may have for your takeoff roll, if an engine fails after V1, you should continue the roll and take off, not the least because you never know you might be able to make a full stop without a runway excursion.

Granted what they say is true, is it as well not permitted to plan a reduced V1 speed for the runway whose ASDA is shorter than the ASDA for a maximum takeoff weight flight of the day?

Yes it's a viable option, but it must be approved by the manufacturer.

Lowering V1 requires lowering the thrust as well. Because high thrust at a slow V1 means the rudder won't have enough control to counter the thrust asymmetry when an engine fails. Low thrust equals low Vmcg, which can be the lower-limiting factor for the V1.

This reduced thrust setting (derate) can't be overridden in case an engine quits.

Another trick is the opposite: to increase the V-speeds (again, must be approved). It's called "improved climb". This only works if the limiting weight is the climb limit (not the field limit).

By increasing the V-speeds you get a better climb gradient for the same flap and thrust setting, i.e., there can be two sets of V-speeds for one flap setting, e.g., Flap 15, and Flap 15 Improved. 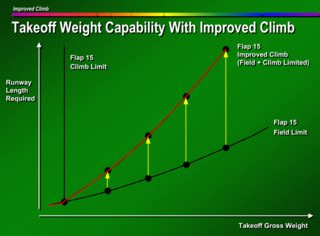 RE: Is it really the case that a runway length does not affect V1?

Runway length affects V1 only indirectly and not always. In the takeoff performance calculation there isn't a graph or table to lookup that links length to V1. Headwind, cold weather, and high ambient pressure are some of the factors that make a runway longer than it actually is (performance wise).

The first step in performance planning is calculating the corrected length. From there there are three limiting weights: field, climb, and obstacle clearing. The lowest of the three will be the limiting weight of the day.

If the takeoff weight will be lighter than the lowest, then reduced thrust can be used to save on engine wear, for example.

Once the weight is known, then the V-speeds are checked. If the weight is between the climb and field limits, then the aforementioned improved climb calculation can be used (if approved). Likewise for the field limit and using derate.

In other words, the corrected length only affects one of the three weights: the field limit weight. Which may not be the limiting factor. If it is the limiting weight, then yes length affects V1, but it usually isn't for the big transport planes.

9
How much power do planes use when taking off at London City?
8
What is the difference between Assumed Temperature and Derate takeoff thrust?
8
Why are only two of the five water-facing runway ends at KBOS equipped with EMAS beds?

16
How is minimum runway length related to V1?
4
Why do you need to subtract when using a climb/descent performance chart for an altitude other than sea level?
20
Why is the takeoff decision point based only on speed and not time or distance?
3
What's exactly meant by the "slippery when wet" report on ATIS?
1
What determines the maximum speeds for a particular aircraft?
1
For what is VMCL the minimum control speed?
5
Can longer paths consume less fuel than the (shorter) great circle path?
9
When was the concept of V1 introduced?
4
Are there more refined rules-of-thumb for Top of Descent calculation, than the simple FL x 3?