Is there a use scenario for the Detote value?

Im currently working on the fuel calculation of an airplane, when i stumbled upon a value called "Detote". When asking around, no one knew what the use case of this value is or why it even exists.

In the handbook it is described as follows:

A DET (detotalizer) fuel amount is a digital value from which the fuel used, as measured by the fuel flow meter, is deducted, allowing a comparison to be made with the measured fuel contents.

This value can be set via the UFCP and will show up on the MFD.

What are the application scenarios for the Detote value? Did you see this value implemented on an aircraft?

On 747-100/200 aircraft, the "detotalizer" was on the flight engineer's panel. The image below is, I believe, from a 747-400 because those on the -100/200 aircraft were mechanical digits rather than electronic, but I couldn't find an image of the earlier version. 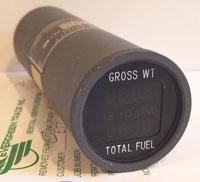 The amount of fuel showing on the detotalizer was considered to be more accurate than that shown by the fuel quantity gauges, and thus was controlling for en route flight decisions.

Besides quickly and accurately giving the amount of fuel remaining in general, it was critical to redispatch operations (sometimes called reclear). See the "Reserve reduction" section of the Wikipedia article on flight planning for a detailed redispatch explanation.

An example. I used to fly JFK to Tel Aviv, a flight that always required a redispatch in a -100 and sometimes in a -200. The flight was usually between 10 and 12 hours, depending on winds, how you hit the North Atlantic track system, and routing through Europe. Let's say the expected fuel burn was 275,000 lbs. The dispatch fuel requirement would be that plus 5% reserve (from memory, might have been a higher percentage). So, to be legally dispatched to Tel Aviv, you had to have 288,750 lbs of fuel at takeoff. But let's say the most fuel you could load (or wanted to) was 280,000 lbs.

Coming up on the intersection, you looked at the detotalizer. If it showed at least the required legal fuel on the second flight plan, you called the company and were redispatched. If it showed less, you would turn left at the intersection and refuel at Athens. As I remember, I never had to do that, although, truth be told, there was the occasional fudging of a hundred pounds or two, maybe three, but never more than that.

Not the answer you're looking for? Browse other questions tagged fuel-systems or ask your own question.

3
What are the dimensions of an NPT pipe for fuel systems?
3
Are there any Part 135 (On-Demand Passenger Charter) companies out there that use Aviation Bio-Fuel?
23
Is there a tank priority sequence for using the fuel tanks?
3
Are there any 100% renewable energy aircraft in development?
2
Why is the fuel pump in the startup procedure for a Cessna 172?
15
What is the purpose of the fuel shutoff valve?
16
How does the fuel pump work in a PA-28 and when should I use it?
2
Is gascolator and fuel strainer the same thing?