How much air is recirculated (vs. bleed air injected) in modern airliners cabin?

Air in the cabin of airliners is a mix between:

How much air is recirculated? What are the reasons for recycling air instead of using bleed air only?

From an own work report, based on public web presentations for type rating and on The Boeing 737 Technical Guide by Chris Brady: 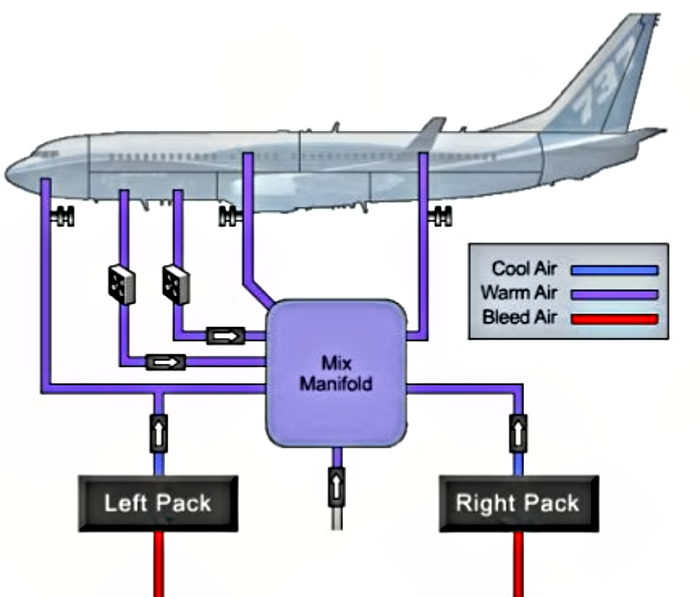 A portion of the conditioned air from the left pack flows directly into the flight deck. The remainder of the left pack air, all of the right pack air, and air from the recirculation system is combined into the mix manifold. Mix manifold air is distributed to the passenger cabin through different zones, via the side-wall risers on the left and right sides of the aircraft. On ground, pre-conditioned air can be pumped directly into the mix manifold

In modern aircraft cabin, close to half of the cabin air is recircualted. As this IATA briefing paper on Cabin air quality - risk of contagious viruses notes:

The cabin air system is designed to operate most efficiently by delivering approximately 50 percent outside air and 50 percent filtered, recirculated air.

The AIVC also notes in Air quality in passenger aircraft:

In early commercial jet aircraft, passenger cabins were ventilated with 100% outside air. In more recent jet aircraft, approximately 50% of the ventilation air is outside air and the remaining 50% is filtered recirculated cabinair.

At the beginning of the commercial jet airliner age, jet airplanes did not have cabin air recirculation systems,... The primary reason was that early jets were powered by highly inefficient turbojet engines.

As engine technology progressed, turbofans were developed with a core bypass ratio of approximately 2 to 1. Fuel economy improved and the cost of engine bleed air relative to overall fuel consumption was still sufficiently small to make 100% bleed air to the passenger cabin cost effective.

As modern turbofan engines with high 5 to 1 bypass ratios were developed, fuel consumption to provide engine thrust decreased. However, the fuel consumption relative to extracting bleed air dramatically increased, almost in direct proportion to the higher bypass ratio. For a 767 with P&W 4000 engines, the percent increase in fuel consumption due to bleed air only would be almost four times higher than an equivalently sized turbojet for the same amount of bleed air.

Not the answer you're looking for? Browse other questions tagged airliner cabin-pressure or ask your own question.

17
Do airliner cabin filters trap viruses or other pathogens?
10
Is the bleed air passengers breathe tapped from the engines before or after it comes in contact with fuel? And why? Isn't this unhealthy?
3
Do pilots get more fresh air than passengers?
3
Do pilots breathe the same air as passengers?
2
What could cause instant nausea when entering larger passenger planes?
1
Why does the cabin air sometimes smell of kerosene?
1
How is bleed air flow related to thrust level?

6
Are airliners' pilots trained to safely ditch an aircraft?
17
How common are emergency landings for airliners? Is there really more than one per day at Heathrow?
9
How is bleed air used to start a jet engine?
6
How does bleed air maintain pressure for pressurization after being cooled?
5
Where can I find a cross sectional area plot for the A320 or other modern airliners?
1
How much air does a 777-300ER's pressure cabin hold?
3
Why would short-haul flights be pressurised at a higher cabin pressure?
17
Do airliner cabin filters trap viruses or other pathogens?