Why can't the flex temperature be lower than Tref? Also why can't we perform a flex takeoff on a contaminated runway?

This is a huge grey area and my quest to find answers for them is never ending. I have referred to many performance books but to no avail. I hope this question can be clarified. Thanks

The engine is flat rated below Tref, and the thrust decreases above this temperature. The point of using a flex takeoff is to run the engine at a lower power setting, where its limit would be at a higher temperature. Using a temperature below Tref would result in the same thrust as Tref. The graph from Airbus below helps to illustrate the relationship between the variables. 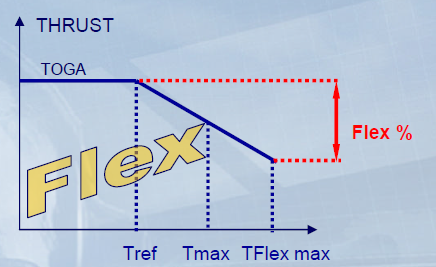 Using a flex temperature lower than Tref does not make sense because it would not have any effect, I'll explain my point. The diagram shown before by fooot is pretty nice to see it so I'll refer to it.

I'll quote the Skybrary article about Flex temperature: "At low altitudes and cooler outside air temperatures (OAT), engine pressure is the limiting factor as the engine is capable of producing more pressure and, consequently, more thrust than the engine can contain."

In conclusion, selecting a flex temperature below Tref is the same as selecting TOGA, as it is in fact selecting the highest thrust the aircraft can safely produce.

I hope this helps and I hope it is correct!

7
What performance issues/symptoms can a pilot expect while taking off above MTOW?
3
What is the absolute ceiling of a 737-200?
3
Why is the thrust/drag increase much lower at a lower FL with weight the only variable?
7
Why is the A330neo more efficient than the A350 on shorter routes?
8
What factors influence the maximum speed of an airship?
3
Can I use any reference area for lift and drag coefficient?
1
Why isn't Vy lower than the speeds for best L/D ratio and best glide ratio in an airplane with a piston engine and a variable-speed prop?
5
Flex temperature isn't actually “fooling” the FADEC, right?