Does "landing south" here mean the aircraft will be landing on the runways north to south?

"Landing south" means the planes are facing south as they land. Depending on conditions, they could come from the opposite end of the runway, and would be "landing north." This is also referred to as "south flow/operations."

If you look at a chart for the IVANE FIVE shown below, you can see why this is important. The runways at KCLT are primarly oriented north/south. The aircraft will enter the approach at MAJIC from the northeast. If landing south, the arriving airplane will fly IVANE BABZE HEELZ and needs to be at 6000 feet when they reach HEELZ north of the airport. Approach control will then turn them south to land. If landing north, they will fly from IVANE to GIZMO and follow the approach down to the south, and don't have to be at 6000 until they get down to ESENE. After reaching JATAB approach turns them north to land.

Telling the pilots which direction they will be landing lets them know which route to follow on the approach and helps them plan their descent. If approach hasn't provided a runway yet, they can also know which runways they can plan for. 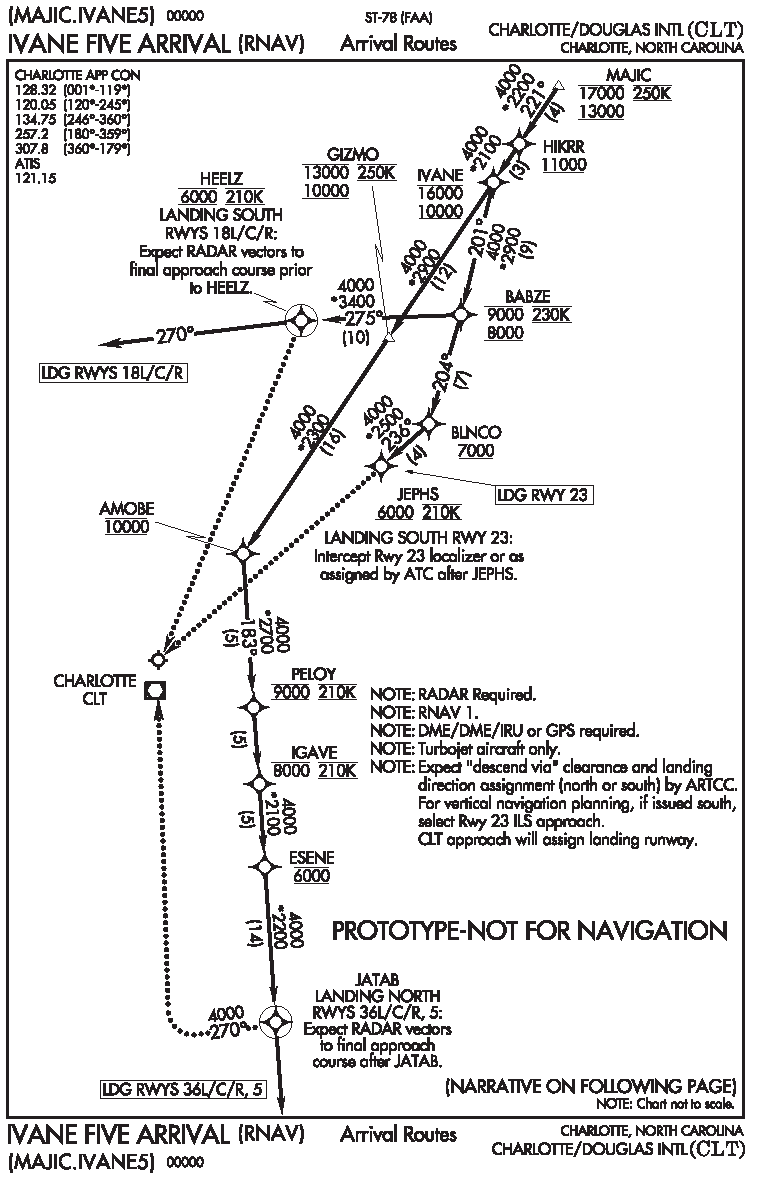 Source. This is the best I could find for the IVANE arrival. The MAJIC ONE isn't RNAV, the CHSLY THREE would seem to be the applicable RNAV procedure from the northeast.

Landing south means that they will be using a southerly heading runway. I.e. landing on rwy 18 rather than 36.

The landing directions will be indicated on the STAR. For example the chart below for Charlotte. 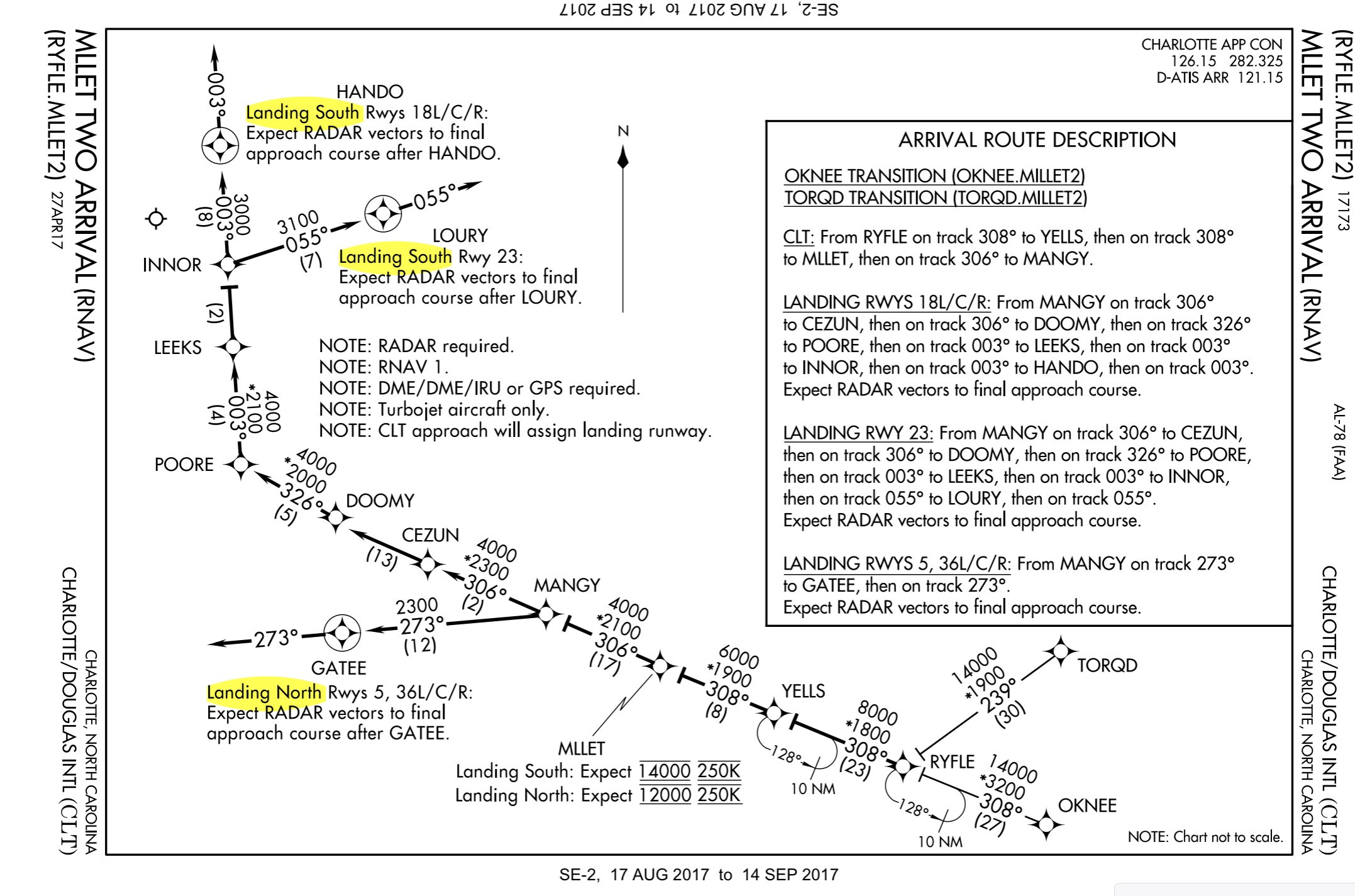 Depending on which runways are in use the flight will take a different branch of the STAR. Since they aren't given a specific runway assignment yet they will report in with the general direction they expect to be landing. They are usually given this by the en route controller. If not the ATIS will tell them what runways are in use. If the northbound runways (36L/R/C and 5) are in use, they are "landing north" so when they reach waypoint MANGY they will turn left to a heading of 273° and expect the controller to give them vectors after GATEE waypoint. If the southbound runways are in use they will be "landing south" and will continue on the STAR until INNOR wp. This lets the controller know what they should expect the aircraft to do until they are told differently.

Usually when they check in they will be given a specific runway assignment, but it's possible the controller won't have a specific runway yet, so they will follow the correct branch of the STAR until they are given that assignment. That's why they have the general "landing north" or "landing south" designations.

In this example, if they are landing south they need to have a specific runway assigned by the time they reach INNOR because they must either turn right toward rwy 23 or continue straight toward rwys 18L/R/C.

It is possible, due to a shift in wind or noise abatement change, the airport could have changed directions (or the en route controller could have given them incorrect info). That's why they must tell the controller at check in which direction they are going to go.

One arrival may have multiple routings after a branch point, and when ATC assigns the arrival and the descend-via clearance, they have to specify which branch is to be flown.

As an over-simplified example, let's say that the arrival starts at AAA, then flies east toward the airport to points BBB and CCC, which is the branch point. When the airport is landing to the south, aircraft turn north (i.e. onto a downwind leg) and proceed to point NNN and OOO, and then a vector toward the (southbound) final approach course. When the airport is landing to the north, after CCC the arrival would have the aircraft turn south (again, onto a downwind leg) and fly to point SSS and TTT, and then a vector toward the (northbound) final. Each of these points might have an associated altitude and/or airspeed, and the clearance to "descend via the ___ arrival landing north" and "... landing south" tells the pilot which set of points (AAA-BBB-CCC-SSS-TTT-vector, in the "landing north" case, or AAA-BBB-CCC-NNN-OOO-vector in the "landing south" case) he's cleared to fly, along with their associated speeds/altitudes.

Not the answer you're looking for? Browse other questions tagged air-traffic-control phraseology sid-star or ask your own question.

12
What is the correct traffic pattern at a towered airport?
13
What is the meaning of “altimeter three-zero-one-one”?
4
How are arriving aircraft assigned to runways?
3
Does TRACON airspace override Class B airspace in terms of control authority when controlling approach or departure procedures?
1
When pilots check in with a different controller, how to reference flight level?
4
Help in decoding this ATC instruction with landing clearance?
2
Symbology on standard terminal arrival (STAR) charts: T-ended vs arrow-ended lines?
5
Why wouldn't KJFK offer the ILS for 22L?
7
What does “<aircraft type> X miles in trail, runway 25R cleared to land” mean?
1
Descend via STAR, after getting crossing restriction previously