Would it be viable to use jet blast deflectors as a power source?

From an environmental point of view would installation of windmills just before jet blast deflectors provide enough power to power up all machinery at airports? How much of a reduction in reliance on fossil fuel sources of energy would that be? By how much would that reduce landing fees and could the energy provided at least power a mechanism that could tow All aircraft (including the Airbus A380 and the Boeing 747) during the entire taxi phase pre flight and post landing along with ALL airport machinery in busy airports like Heathrow

A windmill is a turbine, so it's better to build an optimized turbine. I've studied your idea and this draft design has come out: 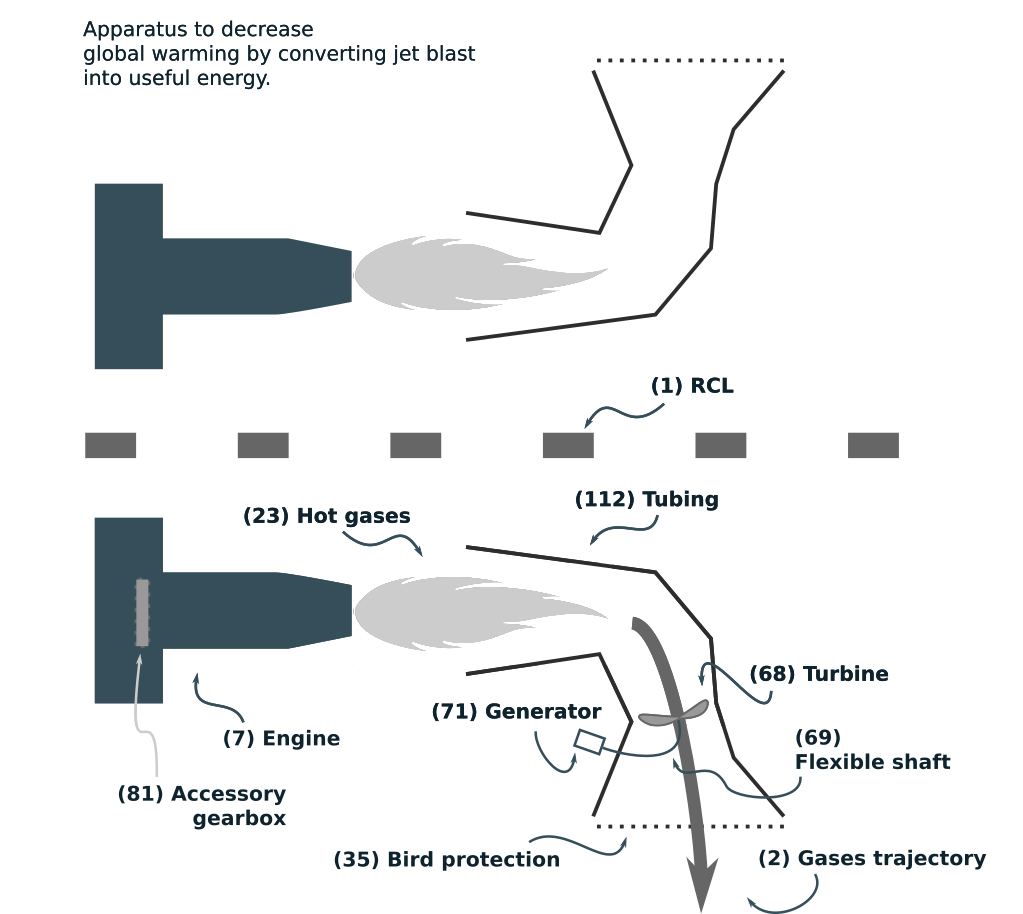 The apparatus has these innovating characteristics:

For increased operation time, the apparatus can move with the airplane until a certain speed (configurable) is achieved (cable not included).

From an environmental point of view would installation of windmills just before jet blast deflectors provide enough power to power up all machinery at airports?

From an environmental point of view? Not sure what that has to do with providing power, but no, here's why: First, many airports do not have jet blast deflectors at the ends of runways or in a place that sees most of the jet blast.

Aside from that, windmills (wind turbines) can't spin at unlimited speed. Here's what happens one one goes too fast (small turbines have the same issue, but can stand wind speeds up to 100-ish mph). Turbines are designed such that they have an optimal output within some speed range, below that they don't generate much power, and above that they can get hot and fail, or have to be throttled back to stay in the power band.

So seeing as how you would need to have them close to the ground where they aren't useful for natural breeze, providing major power to the airport is not going to happen.

How much of a reduction in reliance on fossil fuel sources of energy would that be?

Why do you assume that the airport runs on fossil fuels? Many airports are running "green" initiatives, installing solar panels and bio-diesel reactors. They may also be purchasing renewable energy credits so that they try to get a good portion of the power used from renewable sources, such as wind farms.

Such a tow system would almost undoubtedly increase landing fees. You are looking at it purely from a fuel savings view, but lets look at it from other angles:

Honestly these tow systems are not economically viable at this time. Aircraft are extremely fuel efficient (although not on the ground), but they have procedures to mitigate fuel expense on the ground. They shut down unused engines, turn off anything that isn't required, and reduce power consumption.

If you are looking for ways for the airport to save energy or generate it themselves, then solar panels or these tiles that generate electricity are more viable.

An airport uses about 20 MW of electricity, on average. That is to say, averaged over 365 days, 24 hours a day. Your windmill will have a peak production of about 1MW. And that's for very short periods only. Pilots, if only for economic reasons, don't run engines at high power unless they actually want to move the plane. That means they operate close to your windmill for short periods only.

It's far more economical to put solar panels between all the runways and taxiways. There are large areas there where you can't put anything significantly above ground level, as wings will travel over this area. But as they're not intended to be driven on, these areas can have solar panels as long as they're anchored to the ground. Solar panels can put out 100MW per square kilometer during the day.

Not the answer you're looking for? Browse other questions tagged airport airport-design emissions or ask your own question.

13
Are zero visibility landings a possibility for the future of commercial aviation?
8
Why would an airport use crossing runways for takeoff and landings?
27
Is there any technical reason that prevents installation of a jet blast deflector at Princess Juliana airport?
4
Is there a significant difference between the jet blast from Airbus and Boeing?
2
Are the jet blast fences positioned other way around in this video?