How did ATC procedures and airspace structure change after San Diego PSA collision?

In 1978, a Pacific Southwest Airlines aircraft collided with a Cessna 172 while approaching the San Diego airport in California. The GA aircraft was piloted by a student, and crossed the approach trajectory of the B727, killing 144 people. 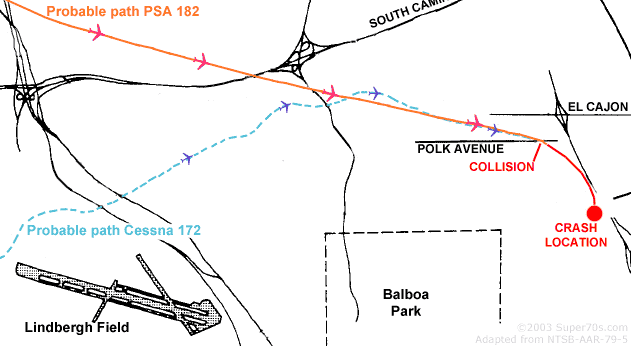 To my understanding, ATC was not aware of the Cessna actual location, The airliner crew didn't see the Cessna, and the Cessna was not wrong being in this airspace near a busy regional airport.

What changed after this accident to make such situation impossible?

The recommendations from the NTSB report are:

The most direct change stemming from this accident is the establishment of a TRSA at Lindbergh on May 1, 1979. (It is now a class B area).

Also in 1979 the Lindbergh tower was equipped with some upgrades, including minimum safe altitude warning and conflict alert enhancements.

The other recommendations are fairly vague and I find no indication what, if any action was taken on them. But as Gerry pointed out in comments, this accident put emphasis on the FAA's effort to create TCAS. From the TCAS II V7.1 Intro booklet:

In 1978, the collision between a light aircraft and an airliner over San Diego served to increase FAA's efforts to complete development of an effective collision avoidance system.

The see-and-avoid system is still very much in use. Visual approaches are still used. There really were no immediate systemic changes made in response to the accident. Mostly it was just airspace configuration around KSAN and enhancements to the radar system there. But, like every accident, the NTSB and FAA learned from it and took steps to improve safety. The FAA releases pamphlets appropriately titled, "Lessons Learned," about what can be taken from different types of accidents.

In addition to TomMcW@'s answer, the FAA also installed ILS systems at both KMYF and KCRQ and implemented Class B airspace around KSAN.

The Cessna wasn't just allowed near busy airspace, they were specifically doing ILS training at the airfield executing a missed approach under VFR.

Furthermore, PSA 182 did report traffic in sight but they continued their landing procedure anyway once they lost visuals. The fact that ATC didn't know precisely where the Cessna was and recognition that accidents happen even when aircraft report that they are maintaining visual separation also directly lead to Class B airspace being implemented at KSAN:

As a result of the crash, the NTSB recommended the immediate implementation of a Terminal Radar Service Area around Lindbergh Field to provide for the separation of aircraft, as well as an immediate review of control procedures for all busy terminal areas. This initial rule did not include small, general-aviation aircraft. Therefore, on May 15, 1980, the Federal Aviation Administration, implemented what is called Class B airspace to provide for the separation of all aircraft operating in the area. Additionally, all aircraft, regardless of size, are required to operate under "positive radar control", a rule that allows only radar control from the ground for all aircraft operating in the airport's airspace.

Not the answer you're looking for? Browse other questions tagged air-traffic-control aviation-history airspace or ask your own question.

4
Is there a published airspeed and TPA for Class B approach at San Diego International?
6
What separation and information does ATC provide in different airspace classes?
3
How is collision avoidance regulated in controlled airspace in Canada?
7
How did the service ceiling certification change in the 70s?
6
Can ATC terminate flight following AND approve (arbitrary) frequency change while still inside Class C airspace?
0
If all aircraft were TCAS-equipped, how would this change ATC routines?
8
How does an airspace class change from E to D affect already airborne aircraft?