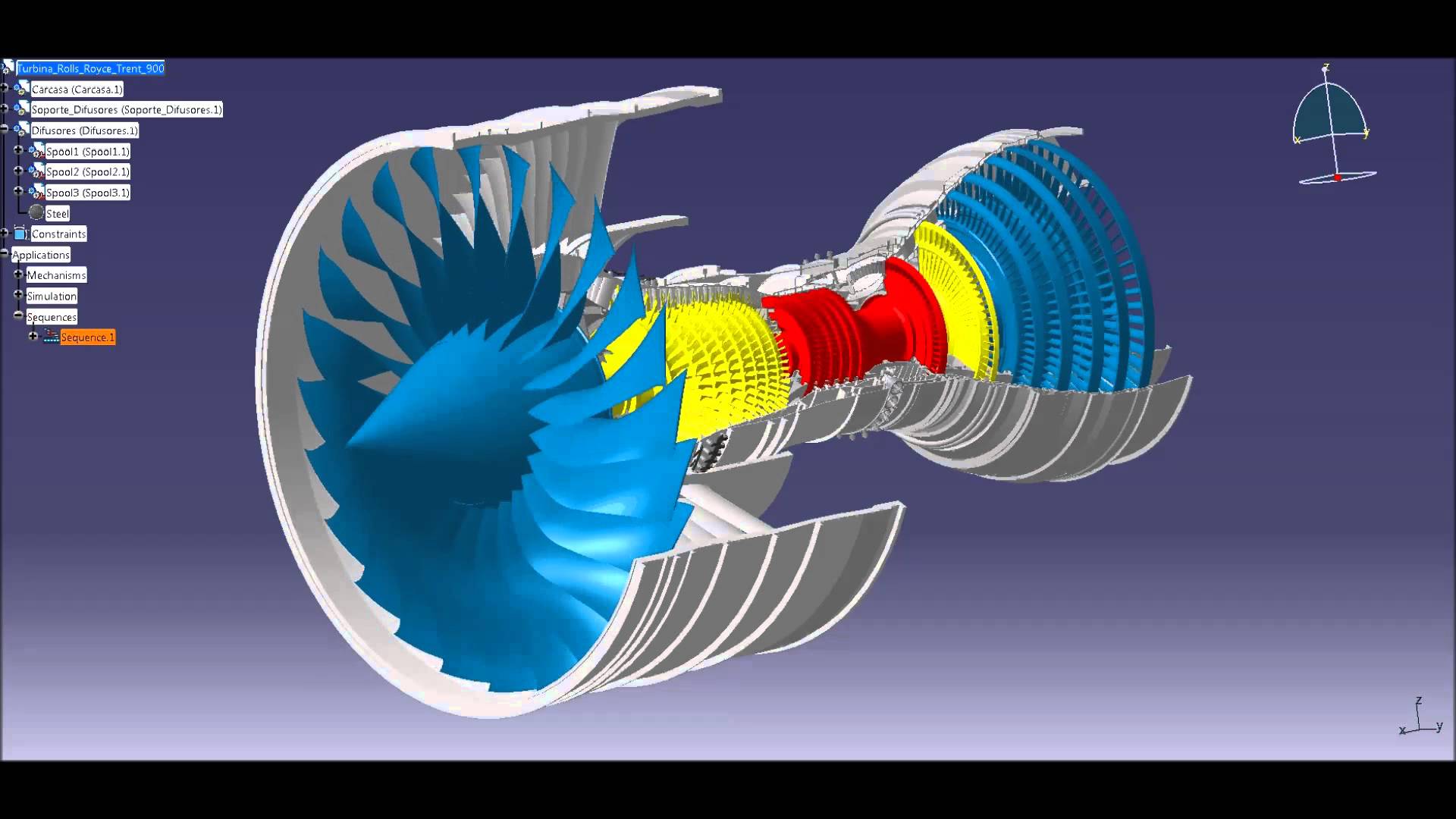 The Trent 900 (like most Rolls-Royce turbofans) is a 3-spool turbofan, rather than a 2-spool. But even here, my observation holds. There are far more LP turbine stages than the middle or high pressure stages.

From this presentation: the cross section of the Trent 1000. It shows that the LP, IP and HP rotors have different rotational speeds, but does not list them. Another (older) presentation lists them as 3600. 6800 and 10200 RPM. Rotational speed goes down as the volume of the mass stream goes up. 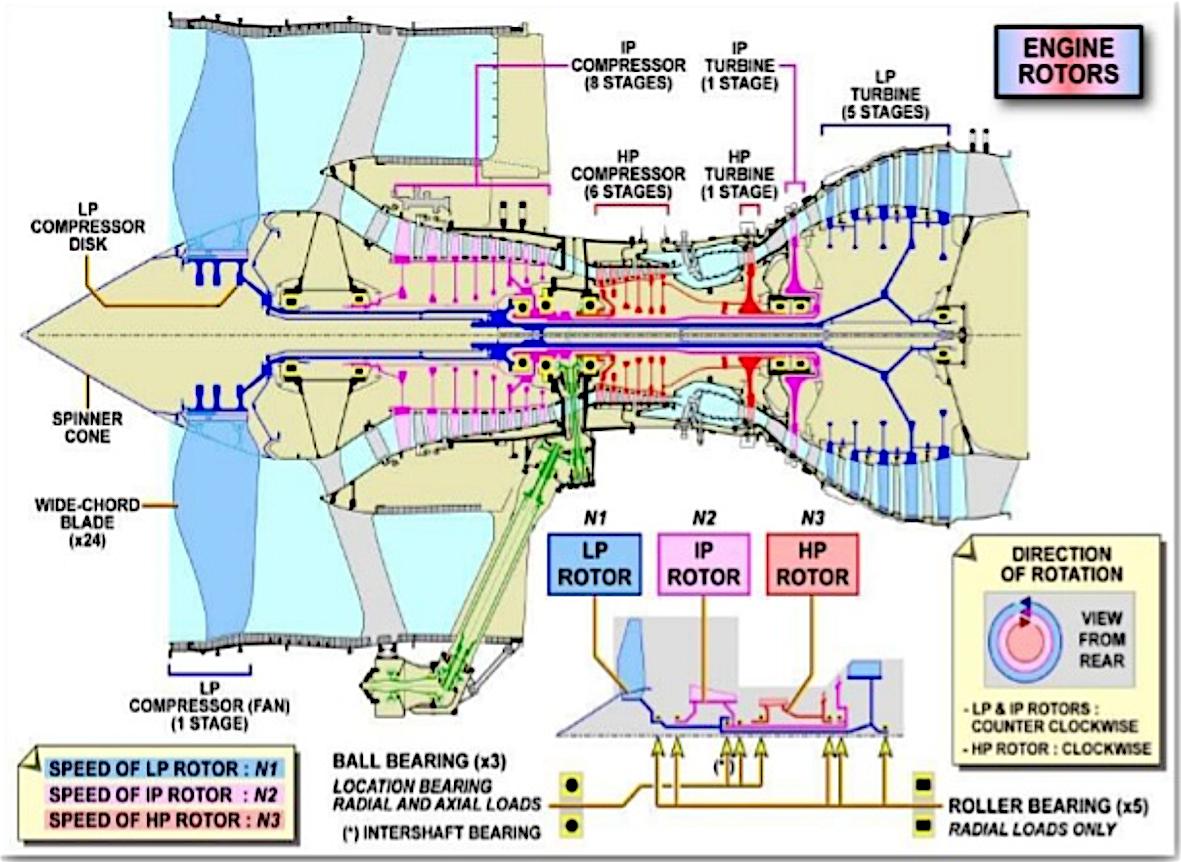 An old textbook of mine gives the power P extracted from a turbine stage as: 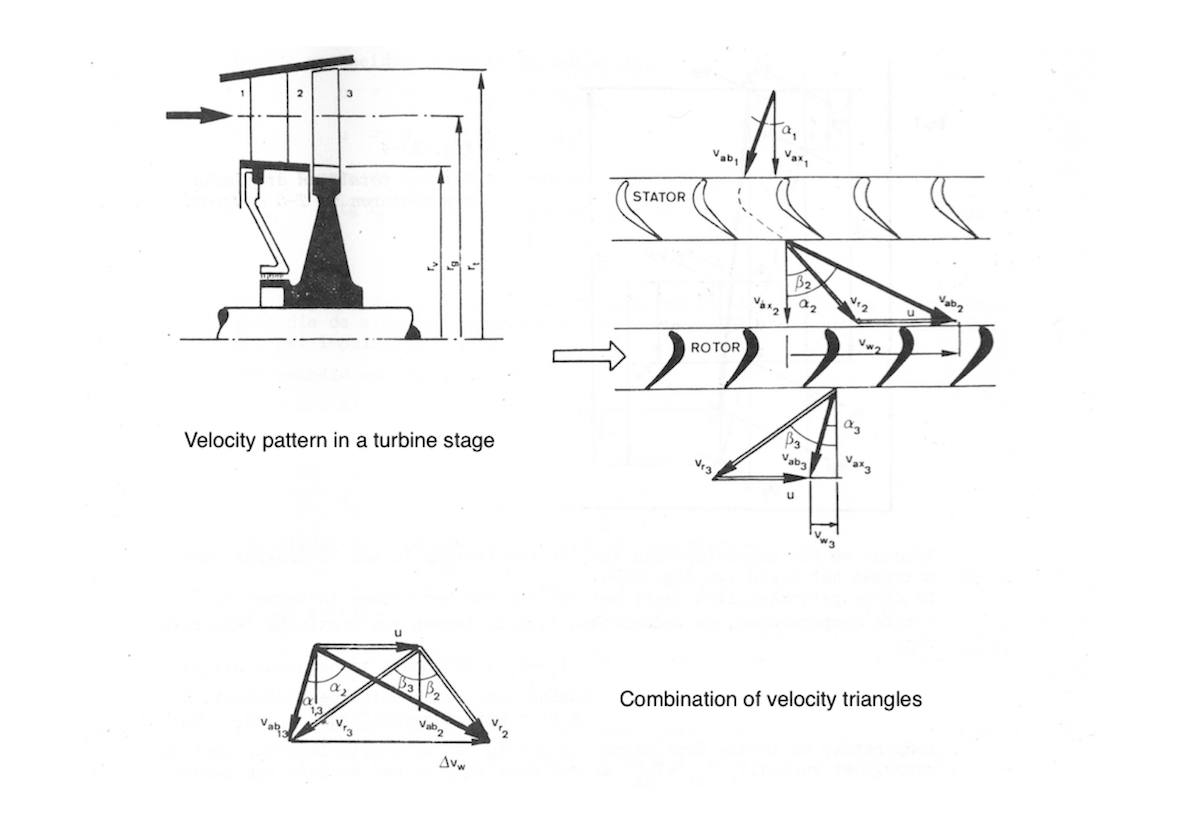 So the tangential speed of the turbine blade is in the equation for power extraction, which is composed of rotational velocity and blade radius. The faster the turbine turns, the more power can be extracted per stage, and the fewer stages required. Why then does rotational velocity go down with pressure? (HP = 10,200; IP = 6,800). 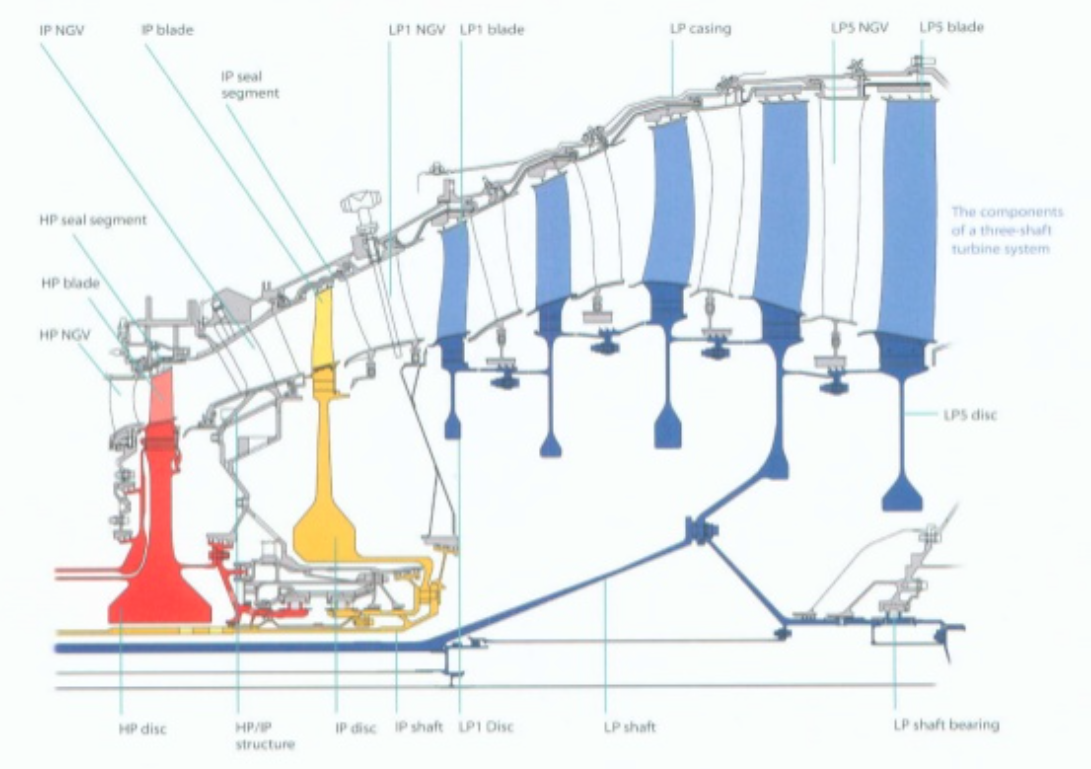 The reason is the constructional limits of the turbine. As the gas stream expands, the turbine blades become larger and are mounted at a greater axial distance, which results in greater centrifugal forces which are proportional to blade mass, rotational speed and distance from the axis. In order to limit centrifugal forces, the rotational velocity of the rotor is reduced: each subsequent stage turns at a lower RPM. Notice that a lower RPM can be compensated by mounting the blade further away from the rotational axis.

The LP rotor of an un-geared engine runs at the same rotational velocity as the fan. Its optimal RPM for the turbine may be higher, and that can be accommodated by the geared fan. As the bypass ratio gets higher, the LP turbine will be extracting a higher fraction of total power from the airstream - turboprops and turboshafts have a gearbox in between the LP shaft and the propeller/rotor, and the high bypass fan approaches the relative dimensions of a propeller...

The answer provided by Daniel Kiracofe is correct, I just have a couple of additional comments and I don't have enough reputation to add this as a comment to his answer.

Here's an even more interesting question. Take a look at the P&W geared turbofan cross section (e.g. this article). It only has three LPT stages! So how come the GTF has 3 and all of the other engines like the RR Trent 900 have a lot more? (e.g. a GE90 has like 6 or 7).

The answer is this: fans are best when they run slowly. LPTs are most efficient when they run quickly. On an engine like the Trent 900 or GE90, the fan and LPT are on the same shaft, so they have to run at the same speed. So you have to compromise. Usually the compromise tends to favor the fan. So, because the shaft is running at the speed that the fan wants to run at, the LPT is inefficient. That is: each LPT stage is not extracting much power from the air. Therefore, to get out the total power that you need, you have to have a lot of LPT stages.

In addition to Koyovis' answer which discusses the output requirements of the turbine stages, there's an input issue as well:

The HP turbine stage has the best spot: it has the highest input pressure, so you only need one stage to extract enough power to run the HP compressor. The LP turbine stages run on exhaust gases that have already had some energy extracted from them, so lower pressure->stage is less efficient->you need more of them to get the required power.

I like some of the answers here, but none seem to answer the question from the fluid mechanics' perspective.

One of the reasons the low pressure region has more stages is because you want to avoid flow separation which cause a loss of energy to recirculation instead of providing thrust or power. The low pressure region is compressing; this causes an adverse pressure gradient. In layman's terms, the flow basically wants to go backwards because high pressure tends to flow towards low pressure.

The turbine blades have airfoil shapes, and they work exactly like aircraft wings in that lift is produced in one rotational direction to produce a desired effect. Therefore, if you try to turn the flow too drastically without considering the adverse pressure gradient, then you will get flow separation and a drastic drop in your compression ratio and a drop in efficiency for all of the other turbine parts.

Turbomachinery designers want to turn the flow a certain amount, but they do not want to do it with one stage. So, the engineers opt to turn the flow a little bit each during each stage, and it turns out that the extra weight from all of that metal is worth it.

On the flip side, the high pressure section has fewer blades because the flow really wants to just leave already, so recirculation is much less likely. This is where you can cut corners and put half as many stages. Look how drastic the flow turning is on this high pressure turbine blade here. http://www.technology.matthey.com/wp-content/uploads/articles/39/3/pmr0039-0117-f2.gif 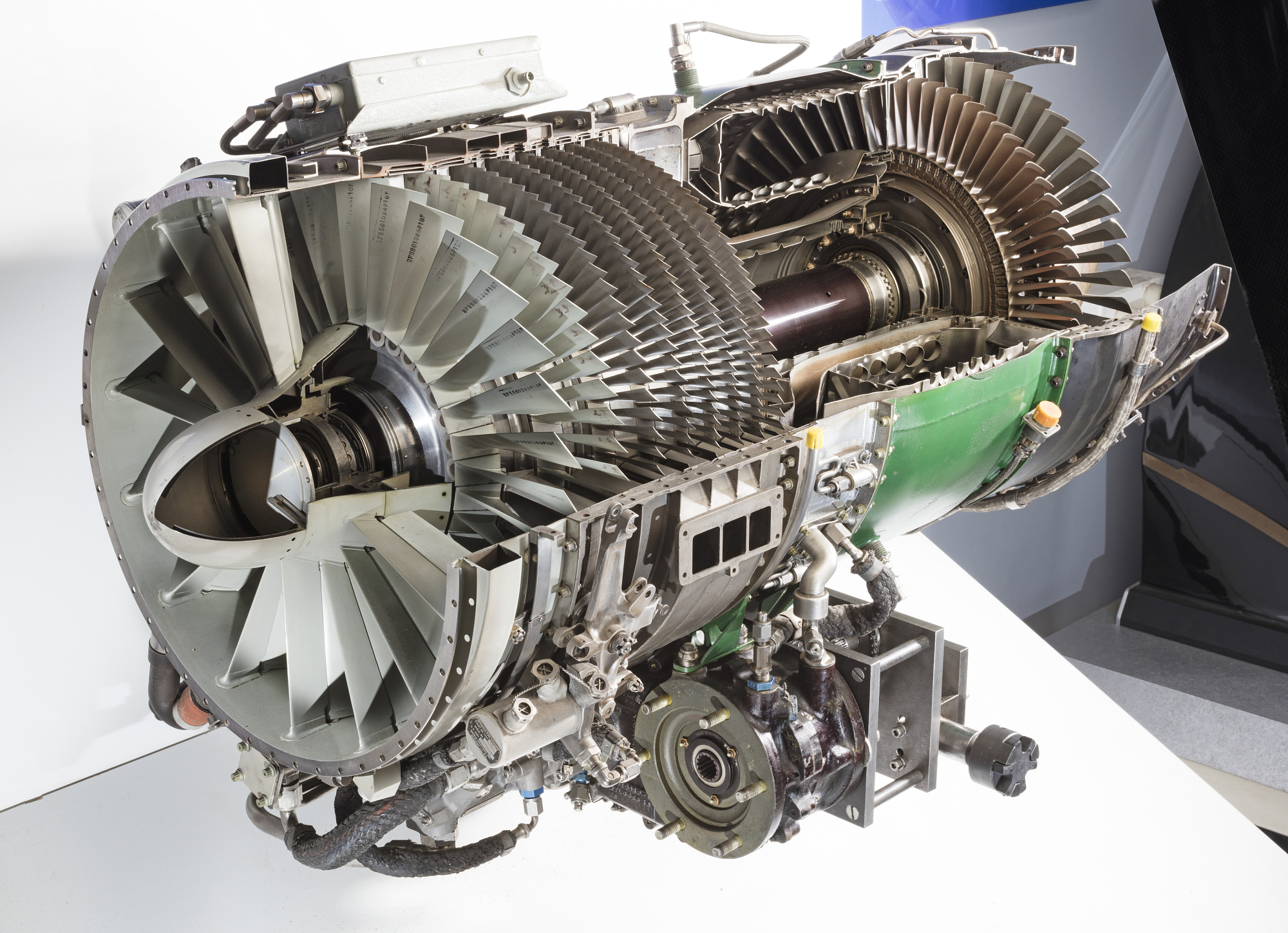 See how the low pressure blades are almost straight?

Not the answer you're looking for? Browse other questions tagged turbofan turbine engine-design compressor or ask your own question.

0
Why does the CFM LEAP have so many LPT stages?
2
What do compressor/turbine stages mean, and why we need a different number of stages?

16
Is it possible to drive a prop directly from a jet engine without a gearbox?
10
What is the function of the protruding outlet on the Trent XWB?
14
Why are there fewer stages in the turbine than in the compressor of a turbine engine?
10
Why do many large turbofans have a gap (of turbine blades) between the LP turbine and HP turbine?
4
Why does the Trent XWB have intermediate compressor stages?
4
Why are most turbofans tractors, but most propfans pushers?
49
Why are two-stroke engines nearly unheard of in aviation?
2
What mechanism did the turbine reversers of early high-bypass turbofans use?
3
How do jet engines cool the gas in the combustion zone?