Are there any methods to predict the location of a jet aircraft from its sound?

At times there are military fighter aircraft flying overhead of my location (MiG-21Bis and Su-30MKI).

The first indication of their presence being the sound, that obviously causes one to look up to try and acquire them visually. The sound can be distinctly made out to be changing, as if for a moving object (not sure pure Doppler shift and/or change of source location).

However, almost all the times the aircraft are actually sighted in a totally different location from where the sound 'seems' to indicate them to be (and sometimes not sighted at all)! This seems obvious due to the relatively slow speed of sound and the fast speed of the aircraft.

However, are there are any suggested method(s) to locate such aircraft visually based on the sound?

Consequently, sound waves originating at any point along a given circumference slant height will have ambiguous perceptual coordinates. That is to say, the listener will be incapable of determining whether the sound originated from the back, front, top, bottom or anywhere else along the circumference at the base of a cone at any given distance from the ear.

So much so, airplane spotters in WWII judging only by sound misjudged the direction of Allied bombers and the entire Luftwaffe was sent looking in the wrong direction, only to realize the direction reported was incorrect and they had to land once they started running out of fuel.

Göring freely admitted the laugh was on him, that he had sent the Luftwaffe on a mammoth tour of their own air space.

But with computers it can be done using 3D sound localization. Or good old locators: 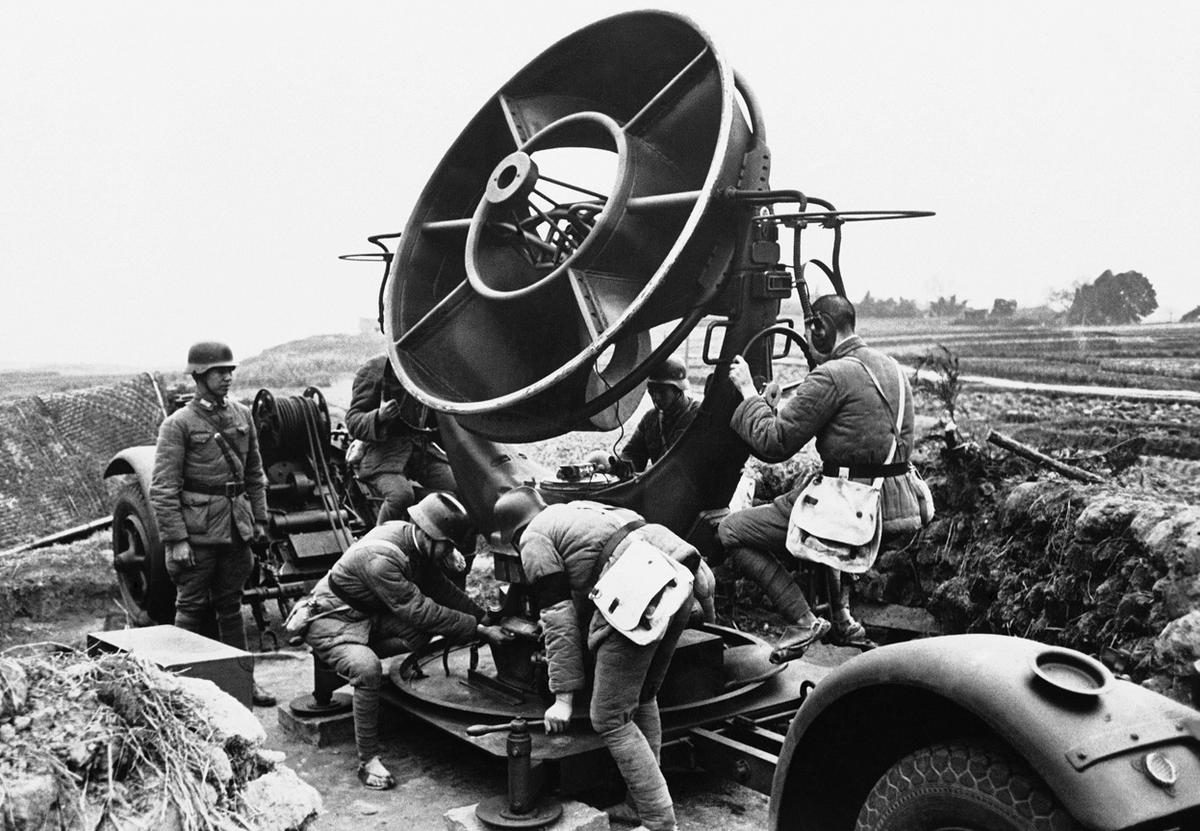 (theatlantic.com) Chinese soldiers man a sound detector which directs the firing of 3-inch anti-aircraft guns, around the city of Chongqing, China, on May 2, 1941.

P.S. Same problem arises when trying to figure out where an artillery fire is coming from or going to.

The Problem with localizing air crafts by their sound is: sound is slow.

The speed of sound is roughly 300m per second.

eg.: If an aircraft is 2km away its sound needs about 6 seconds to reach you. During this time an aircraft traveling at 600km/h moves 1km.

It is quite likely that you hear the sound from high flying airfrafts after it passed your position. This likeliness increases with the speed of the aircraft and reaches 100% for supersonic flights.

Furthermore the air craft can do any maneuver within the time its sound travels to you.

This means that you, at best, can estimate an aircrafts position by sound analysis. The accuracy you can get is far to worse to either use it for air traffic controlling or anti air missile guidance.

Not the answer you're looking for? Browse other questions tagged fighter noise plane-spotting or ask your own question.

18
How do you visually identify aircraft from the ground?
36
Why was there a rattling noise coming from the left engine of A319?
6
Are there any accurate books that help with identifying aircraft when planespotting?
15
Do nacelles around aircraft engines help in reducing the engine sound?
5
What is the highest muzzle velocity of a gun on any fighter aircraft?
17
Are there any reported cases of noise from helicopters causing damage to property?
12
What causes the sudden spool-up sound from an F-16 when enabling afterburner?
6
How are missiles attached/detached from a combat jet aircraft?