How are aircraft lifespans tracked?

When returning from each flight, during which it is subjected to adverse conditions, say arctic weather, desert heat or just moderate conditions, how is an aircraft evaluated to accurately keep track of its lifespan?

Appreciate your asisstance in clarifying this doubt.

The life (Low Cycle Fatigue life) on the Civil airliners is generally talked abut in terms of number of cycles i.e. number of flights. And since airliners undertake quite predictable flights in terms of loads and stresses, and typically a very limited variations among these parameters for their entire life (since any aircraft would be designed for certain type of range and payload and would be used for that particular purpose mainly, for economic reasons), its easy to talk in terms of number cycles, since variations from flight to flight are limited.

But this issue of keeping track of actual mission profile is very critical for fighter (actually any military jet but I would restrict myself to only Fighters because its easier to point out the things for this case) jets which have quite unpredictable usage profile. Any fighter jet is typically designed for a certain mission mix i.e. mixture of a bunch of mission profiles that the fighter is expected to carry with the expected relative frequency (which comes from the past experience of an Air Force). But still in real life, the actual missions flown end up being quite different that this assumed mission mix. Now it is possible to utilize the airframe structural life to best possible extent by keeping track of actual mission profiles flown and debiting life for each mission from the designed number of hours. Obviously one needs to calculate the life debit for actual mission flown in terms of the equivalent hours for assumed designed mission mix. Say a fighter is designed for 8000hrs assuming it will fly 10 times of missions with certain frequency, and it recently flew a mission for which we know the parameter, then what would be the number of hours of equivalent life that was utilized from this 8000hrs..?

To calculate this we need the loading parameters of each mission such as how many Gs were pulled for how long time intervals, how many rolls performed with what roll rate and so on. Every aircraft has system which collects this information (measured by various sensors) for entire mission. Once on the ground, this information is fed to what is called as "Life Tracking System". It analyses the data, calculates how many hours of debit this mission took on the airframe and then decides what is remaining life.

This can be done at component level as well and one can keep track of available life of each component and accordingly schedule maintenance for each component individually. I am not sure how this is exactly done for entire aircraft (Looking for Patents by Aircraft OEMs would be a good way to start digging in), but I know for the Jet engines. The methodology should be the same in principle. Specifics might change. I suggest you read about Volvo Aero RM12 Life Tracking System (LTS) which finds its origin in GE's LTS for F404. (A good starting point to read) and another one. Essentially all OEMs have similar systems now. RM12 has improved utility of the engine by ~30% i.e. the engine is used for 30% more time now as compared to the case where LTS was not used and differences in missions were not accounted for. Because many missions do not take as much toll on the structural life as it was expected during design (or more number of less stressful missions are flown in actual practice than it was assumed for design).

Most popular technique used to calculate the equivalent LCF life debit for each mission considering variations in loads and stresses for each mission specifically is known as Rain Flow Counting Algorithm. The process essentially looks like this: 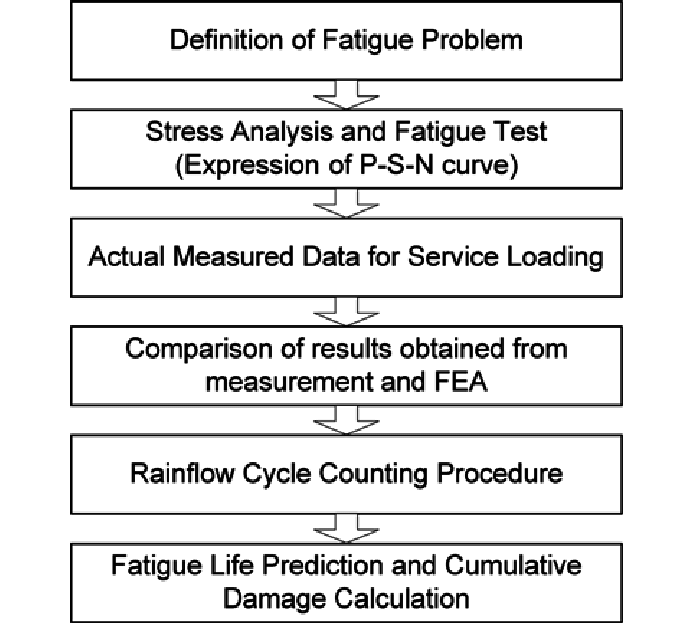 You apply the actual measured loads and see what stresses the analysis predicts for each mission. Then apply Rain flow Counting to calculate accumulated structural fatigue damage and residual life remaining. Rain drop counting is the model which helps you covert the irregular fatigue loading (i.e. varying missions) to equivalent cyclic loading and thereby coming up with a life debit number which is equivalent to the design mission mix and which you can subtract from the designed life hours. That's how you can take care of variation in the missions and loadings in each mission.

For civil airliners: flight cycles. The first aircraft is statically torn to bits to test the maximum strength, another aircraft will be the leader for fatigue cycles and will go through 5 minute flights, day in day out, year after year.

Here's a video on the static test of the A350. It shows the aircraft being strapped in and attached to actuators that bend the wing while measuring the forces on it. Distributed actuators to reproduce aerodynamic lift distribution.

The dynamic test aircraft goes through a tough test program:

This is repeated a couple of hundred times a day, year after year, to become aware of fatigue problems. Cracks that show up stop the tests, then have the manufacturer issue bulletins on replacement of the cracked panel or beam.

Not the answer you're looking for? Browse other questions tagged flight-planning aircraft-maintenance or ask your own question.

10
Are task cards still used in aircraft maintenance?
8
Are there differences in tool standards between aircraft manufacturers?
7
How are timed flybys executed, and what are their accuracy?
5
How often are heavy aircraft brake pads changed?
2
What are the following documents about aircraft maintenance?
6
How many antennae are there on a typical small aircraft, and how are they connected to the avionics?
1
For large commercial aircraft, how are the tires changed?
37
How are aircraft depainted?
2
How frequently do civilian aircraft have mechanical issues to which passengers are oblivious?