What is the minimum number of engines required for taxiing an airliner?

Is using fewer engines counter productive, given that if fewer engines are used more throttle would be required and hence more fuel?

Finally can jumbos like the boeing 747-800 and the airbus A380 taxi with just one engine?

Whether it's a twin-, tri-, or quad-jet, it very much depends on the aircraft design, airline policy, and conditions such as taxiway slope, contamination, weight, etc.

Read the below example for the Airbus A320 to get an idea: 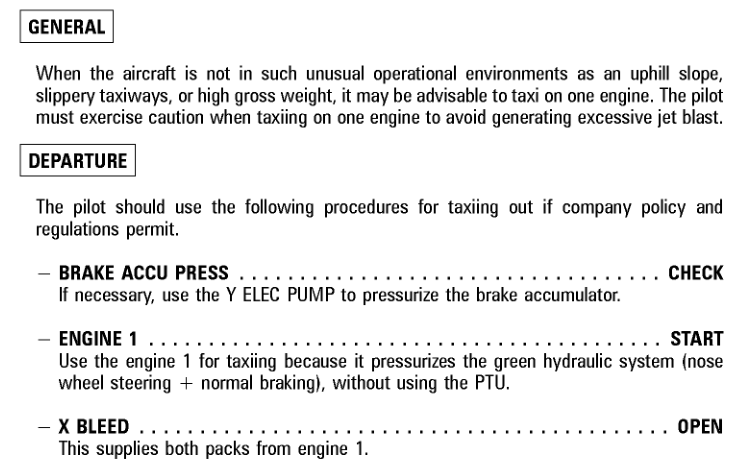 An example of what can go wrong when taxiing on two out of four engines (or 1 out of 2) is having the aircraft in the wrong configuration. Like what happened on August 23, 2001 when the ground engineer had no steering or braking and they ended up in a ditch: 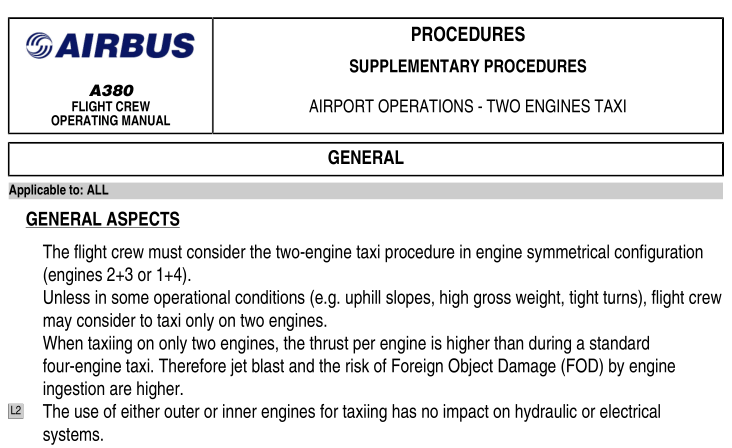 In the 777 it is not allowed. That's an example of how it depends on the aircraft design.

Because of additional operational procedural requirements and crew workload, taxiing with an engine shut down is not allowed. High bypass engines require warm up prior to applying takeoff thrust and cool down prior to shutting down. If the engine has been shut down for several hours, it is desirable to operate at as low a thrust setting as practicable for several minutes prior to takeoff.

According to this Eurocontrol document, the saving is about 4-8 kg of fuel per minute.

Not the answer you're looking for? Browse other questions tagged airliner ground-operations taxiing or ask your own question.

23
Taxiing with one engine: Is engine #1 always used or do they switch?
7
Why not tow aircraft instead of single-engine taxi?

13
Are zero visibility landings a possibility for the future of commercial aviation?
11
Is starting a jet engine without ground support possible?
1
Would "wind turbine generators" in the bypass stream save fuel for jetliners?
9
Why aren't larger airliners such as the A380 more efficient than smaller ones?
1
What is the drag induced by a high bypass jet engine on an airliner?
6
What throttle setting does an airliner use while cruising?
11
During single-engine taxi, how is the asymmetric power compensated for?
1
What is the 'fuel cost' of a pneumatic braking system vs. a hydraulic one, in terms of weight?
6
What are the issues involved in converting a quadjet into a twinjet?
7
Why does taxiing produce large lateral loads on the 747's engine pylons?