What do I need to know to design contra rotating propellers for a powered paraglider?

I wonder if anyone has any technical information that would assist in using the correct Size & Pitch Contra rotating Propellers (CRP) on this Foot launched Powered Paraglider engine ?

We are using CRP to Eliminate the dangers of Torque Twist associated when using a single propeller.

I am looking to use standard 100~125cm (40~49") Propellers that have approx. 28~22 pitch. Noting the Forward prop would need to be a Puzzle type prop, or we would have to increase the forward Hub size, so that it would slip over the Aft prop hub, thus adding more weight & complexities.

This pre-production engine maximum operating speed is planed not to exceed 3'500rpm, so if the Prop output shafts are geared 1:1 with the piston speed or less, the props will also be rotating at 3'500rpm or less.

This is the current CAD design work, the 4stroke, 150cc engine, current weigh approx. 12kg, so it is a very small engine.

So, I hope someone can understand the unique workings of this engine design and move past that and recommend best size & pitch of after-market propellers that would Fit these hubs, preferably also with bolt pattern measurements ? 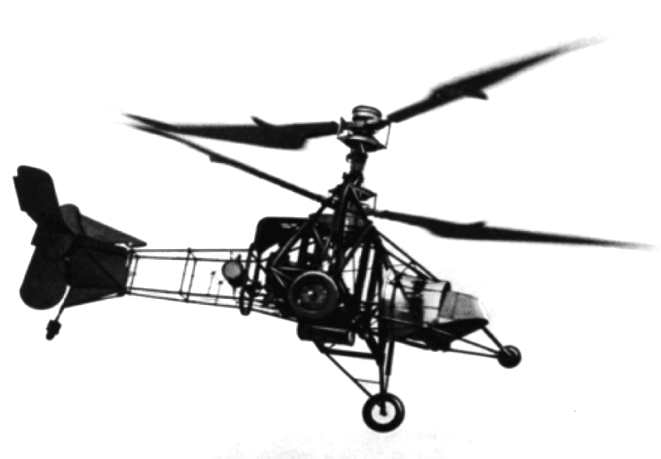 Using two counter-rotating props does indeed eliminate torque issues. The co-axial configuration has been around for a while, like the successful Breguet Dorand of 1936. The thrust, power and propeller disk issues are a bit complicated, let's start with a qualitative discussion.

We're limited to commercially available sizes and pitches and are using fixed pitch. That means that we cannot optimise for the exact circumstances. My recommendations for the design process would be as follows:

For the thrust per propeller, if I compute that from a $C_L$ of 0.55 and integrate that over the blade radius from 5 cm to 48 cm (to account for tip losses), I get:

Power required to generate this thrust is the blade profile power plus the induced power from thrust generation. When I look up the $C_T$ and $C_P$ factors of the propeller disks, I get a $C_P$ of 0.001, resulting in a power P of

So for two propellers with a penalty of 20%, that would be 14.4 kW = about 20 hp. There are some estimates in here and all depends on the pitch size and if my assumptions of blade profile and blade area are correct, but it seems to be in the ballpark. The product would need to be tested for actual thrust and power consumption of course.

If your counter-rotating setup and gearing works, the main selling points would be absence of torque and a low tip speed resulting in low noise.

Some of the comments are on using larger propellers and one 3-bladed and a 2-bladed, and there is a question on using a spreadsheet for single propellers.

My initial concern is using 100cm (40") props may not be suitable, as the bulkiness of a person sitting in-front of the engine & Cage, may not be aerodynamic enough to utilise the air as it passes around the Pilot & engine ?

That information provided appears great mathematical formula, I will pass on to our mechanical engineer.

Not the answer you're looking for? Browse other questions tagged aircraft-design propeller propulsion or ask your own question.

15
Can an ultralight aircraft fly with a 18hp engine?
4
Can the lift equation be used for the Ingenuity Mars Helicopter?
4
How to calculate the number of blades?
2
How do I calculate the total cruise power from the propellers accounting for the losses?