Why does wake turbulence seem to move upward on touchdown?

Source of the first photo

Actually, yes, it is "upside down" as compared to the respective wing-tip vortices.

Your picture shows the vortices coming off of the horizontal stabilizer, 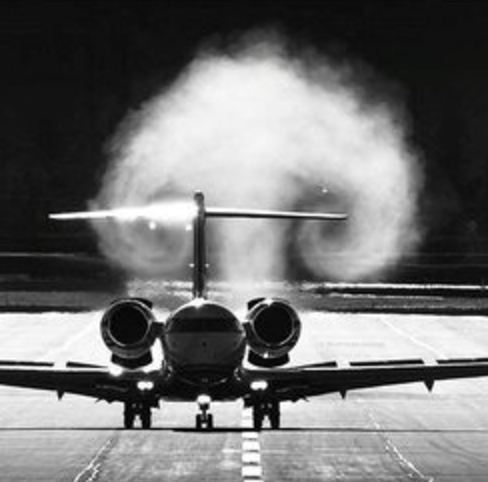 which rotate in the opposite direction of the wing tip vortices that come off of the wing tips. Notice in your original pictures, the 2nd and 3rd pictures show the wing-tip vortices off of the airplanes right wing (as viewed from the front) rotate counter-clockwise. However, in the top picture the right vortex rotates clockwise.

That is because the horizontal stabilizer (along with the elevator in the UP position) is basically acting like an upside down wing defecting air upwards (as the picture illustrates). The high pressure region on the horizontal stabilizer on landing is on the top, while the high pressure region on the wing is on the bottom. This accounts for the opposite direction of rotating between wing tip vortices vs horizontal stabilizer vortices. The upwardly deflected elevator deflects the relative wind upward at the tail causing that upward movement of the rubber smoke.The picture is cropped so we can't see the wing-tip vortices (assuming there was dust or smoke in the air to view them).

Peter Kämpf posted an amazing GIF here showing a slow motion flight of a model 747 going through smoke that shows this process. Its difficult to see, but for a brief moment after the aircraft passes through the smoke, you see the hint of the horizontal tail vortices trying to rotate and go up, but they are washed out by the enormous downwash of the wings.

This is not wake turbulence. This is a hard landing. The smoke from the tires is hot, it rises, hits the fuselage, curls away from it, and then curls back on itself due to the Rayleigh–Taylor instability. 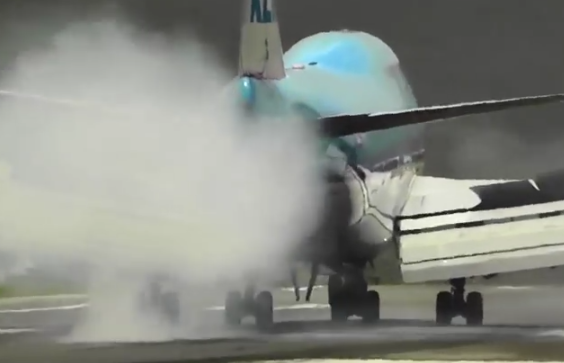 Not the answer you're looking for? Browse other questions tagged wake-turbulence or ask your own question.

14
Does the wake from horizontal stabilizers merge with the wing wake?