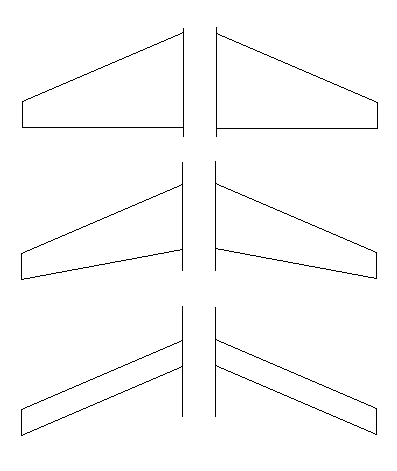 Let's just assume for the moment that all those wings have the same surface area, so that they all have the same total lift. What would be the different aerodynamic characteristics due to the trailing edge sweep angle?

I looked into this and that related question. IMHO they're not quite the same thing as what I'm asking here.

Usually, the sweep angle is defined at the quarter chord line, and trailing edge sweep then follows from:

The three wing planforms drawn in the OP differ in all four defining parameters. Wing area and taper ratio decrease from up to down, aspect ratio and quarter chord sweep increase.

This article describes the aerodynamic design considerations for transsonic wings, and compares wings with varying sweep and thickness, same area and taper. The middle wing has a trailing edge sweep angle of close to zero, following more or less by coincidence from the definition of the main parameters. 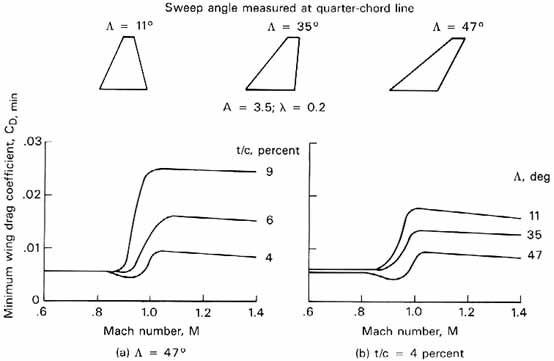 Not the answer you're looking for? Browse other questions tagged aircraft-design aerodynamics wing wing-sweep or ask your own question.

12
What is the aerodynamic benefit of trailing edge sweep?
4
Why are trailing-edge control surfaces usually split?
16
What is the purpose of this aileron trailing edge strip?
32
Why did the DC-3 have wing sweep?
16
Why were the 747SP's trailing-edge flaps so much different than those of the -100/-200?
4
Documentation about "drag stabilized flying wings using non-reflex airfoils"?
0
Spanwise flow and wingtip vortices in forward-swept wings
17
Why does the F-15 have a swept-back trailing edge at its wing tips?
1
Does the quarter-chord-angle rule still hold for wings with very long chords or large differences between leading- and trailing-edge sweep angles?
3
Comparisons between the A340 and 747-200 wing: sweep angle and span