What are the benefits of a non-orthogonal (scissor) tail-rotor?

Why is the tail-rotor of some helicopters (e.g., Boeing AH-64 Apache) made of non-orthogonal (scissor) blades?

What are the aerodynamic benefits (or any other benefits) compared to the orthogonal cruciform option? 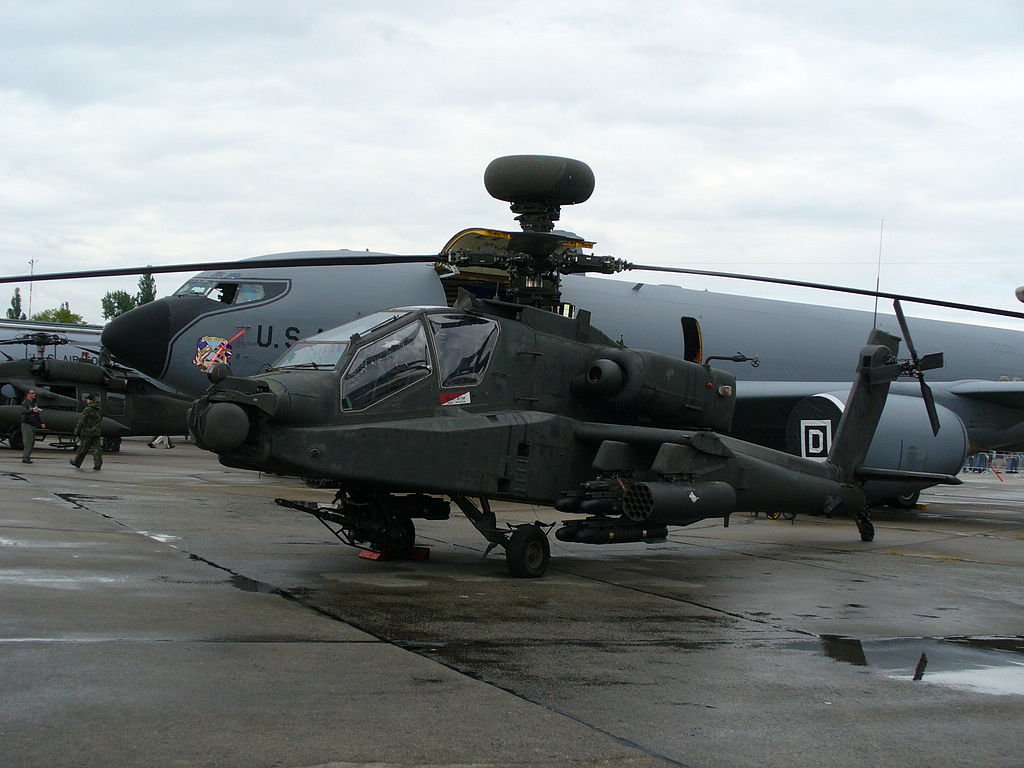 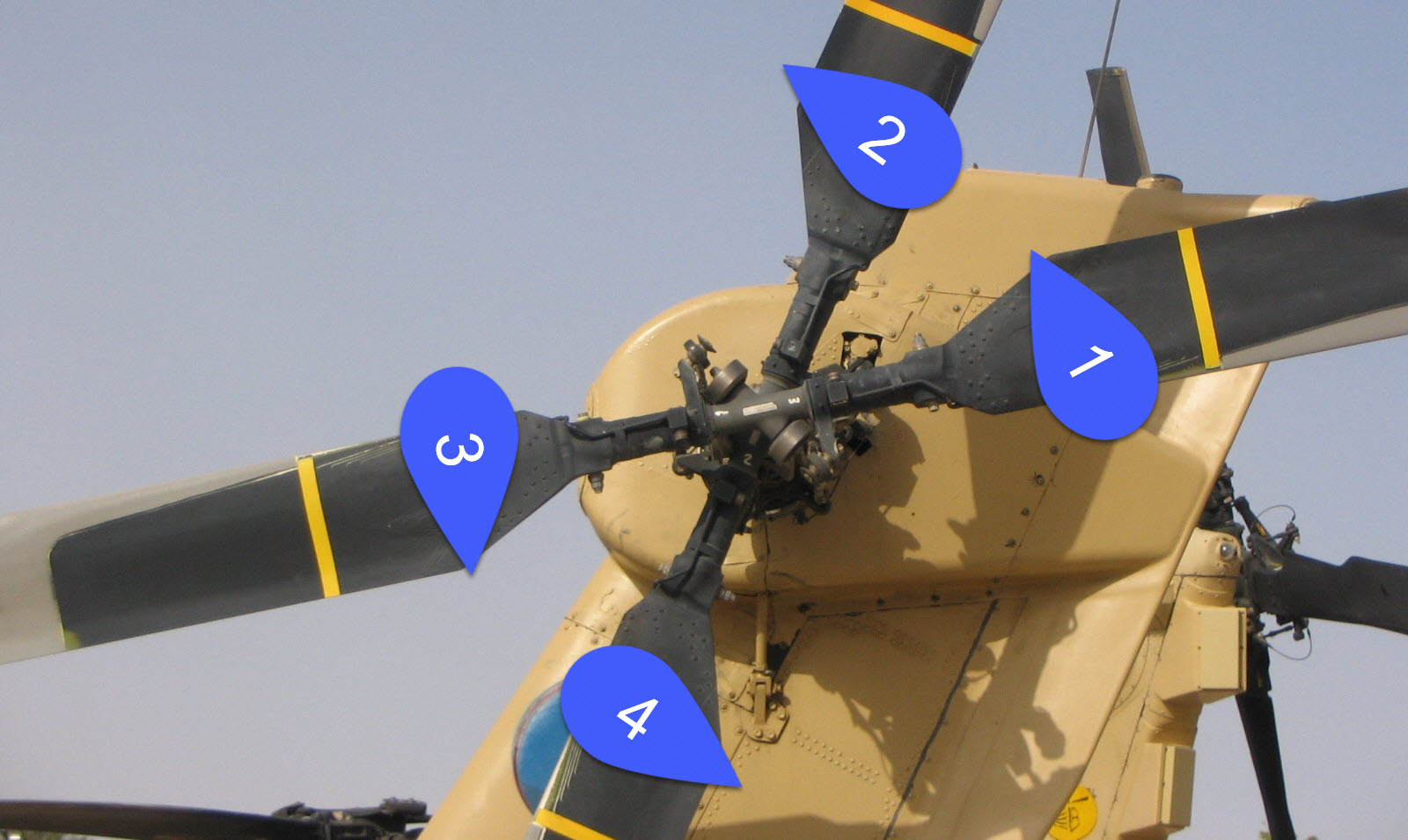 The comments and answers already say it's for noise reduction. What's more intriguing is the how:

The blades are not coplanar (image).

The tail-rotor of the Apache rotates clockwise (video) when viewed from the port side. The nearest blades (nearest plane) to the viewer are the leading blades of each group. A group is two close blades regardless of plane, e.g., 1 and 2 as labelled above are a group, 1 is leading.

The thrust of the tail-rotor is being directed away from the viewer (port to starboard), which means the viewer is looking at the pressure side of the rotor.

Below on the left is what it looks like from behind the Apache. This arrangement allows the trailing blades (2 and 4) to miss the wake from the ones ahead of- (and closest to-) them. 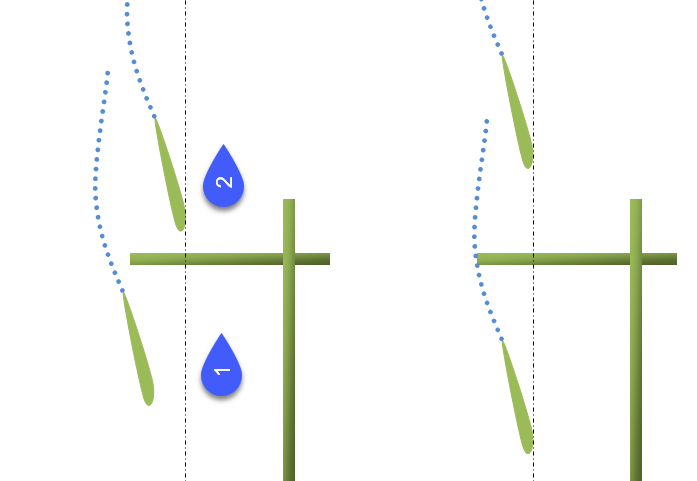 (Own work) Left: Apache; Right: coplanar normal spacing. View is from behind and thrust is left to right.

This L scissor configuration, as it is known, where the lower blade is leading yields more thrust due to the better interaction.

Based on extrapolation of the test results and calculations, the increase in thrust over a conventional four-bladed rotor of the same dimensions is about 10%. Rozhdestvensky attributes Bell's failure to come to similar conclusions to their use of a very small model.

Noise measurements during flyovers were made with a Havoc having the four-bladed scissors tail rotor and the three-bladed tail rotor from the Hind. The two rotors made about the same noise at low speed but at high speed the scissors rotor was quieter. The primary reduction was in the "broad-band" frequency range from 600 Hz to 2000 Hz. Much of the noise at these frequencies is due to the effects of the tail rotor working in the confused wake of the main rotor. The scissors rotor apparently acts more like a two-bladed rotor in this situation. 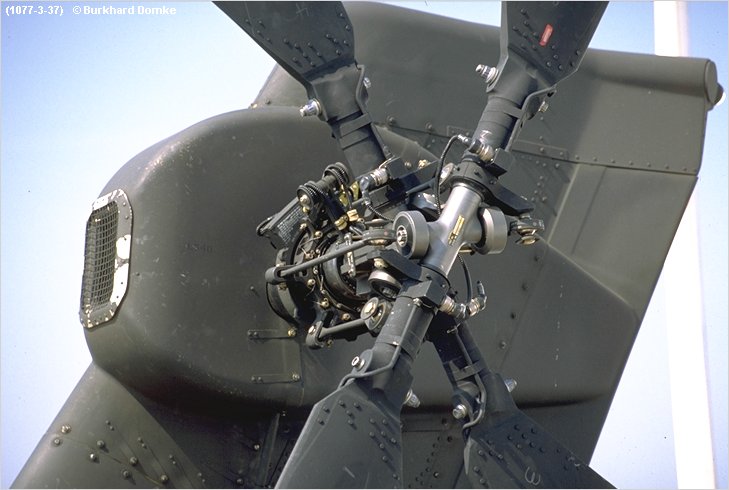 The tail rotor of the Apache consists of two 2-bladed teetering rotors, referred to as scissor rotors. This unusual configuration was first implemented by Hughes Helicopters in the late 1960s for reducing the noise of the OH-6 helicopter. The OH-6 had a single twin blade teetering tail rotor, which Hughes wanted to rotate slower for reducing noise levels.

In order to maintain the same thrust a second identical rotor was mounted, which could not be placed at 90 degrees due to interference. The resulting twin teetering scissors rotor had a good noise profile - our ears are less sensitive to lower frequencies, and the scissor rotor dominant frequency is two per revolution instead of 4 per revolution for the 90°.

The Hughes team minimised new inventions, and implemented this solution for the Advanced Attack Helicopter competition of 1972, which they won. The blades in the Apache tail rotor are mounted at 55 degrees, reducing the harmonics and the pressure levels in the sound profile.

The four-bladed tail rotor is unusual in that, rather than the blades being evenly spaced at 90° intervals, the blades are spaced at 55° and 125° angles. This allows for significant reductions in noise.

This Mindef reference describes experiences with the original configuration of the AH-64, which had a T-tail.

I believe its to reduce the noise, here is a partial info
http://theses.gla.ac.uk/619/

The complex flowfield which is associated with a rotor wake gives rise to the multitude of aerodynamic interactions that may occur during rotorcraft operation. These interactions may give rise to undesirable noise and lead to an unacceptable performance degradation,

Not the answer you're looking for? Browse other questions tagged aerodynamics helicopter tail configuration tail-rotor or ask your own question.

20
Why aren't modern helicopters quieter?
10
Is there a fixed-wing aircraft that uses a scissor propeller configuration?
8
Why divide the blades of a 9 blade propeller into 3 groups?
2
How does the wake behind a propeller blade affect the next blade if the airflow through the propeller should be clearing the wake?