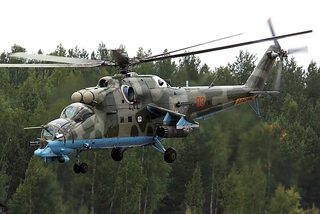 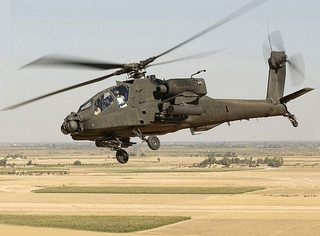 Both are attack helicopters. I have the following concerns with the Mi-35M:

How do they compare?

1) not the same role

2) Cargo compartment is important (see below)

4) Mast mounted radar came later. The original Apache didn't have it and even the new Super Cobra doesn't have it

I'll expand on my comment about the Mi-28 Havoc below but to stab at the Mi-35 you have to look at the Soviet air doctrine when these aircraft were designed.

In April of 1976, Belov reflected an evolutionary change in Soviet attitude toward attack helicopters stating that fire-support helicopters may be regarded as a highly effective weapon for land forces. He felt that these helicopters could be used not only to support subunits on the battlefield but also to destroy various targets independently, to accompany airmobile troops and landing forces both inflight and after landing, to fight tanks and other armored targets and also to destroy enemy aircraft and air-mobile troops both in the air and on the ground.

the soviets though saw helicopters as one in the same. As one author put it in the soviet tactical air doctrine paper from 1976

The one constant in all Soviet use of tactical air power is that air power is only one component that must be used in concert with other military forces in order to be effective.

So their helicopters were not tools that happen to occasionally transport or support ground troops they saw them as integral components in a land/air strategy.

this brings me to the Mi-28 Havoc. Note that on the wikipedia page it looks similar to an Apache. Swiveling gun turret, guided/unguided rockets, etc... But also note it has a small compartment that can fit 3 people.

Imagine an aircraft goes down: pilot, co-pilot, navigator (or some combo like that). In the US an attack helicopter would provide cover fire if needed. a transport helicopter would come in to retrieve the crewman.

BUT in the Soviet strategy even the smaller Havoc could land quickly and evacuate the wounded! It's a stark contrast in CONOPS.

The Mi-35 is really a big version of this strategy. Bring in lots of troops and stick around with rockets and guns to provide heavy gun fire. Unlike the precise shots that the Apache/Havoc can take; the Mi-35 and even the armed versions of Huey's/Black Hawks provide a 'pray and spray' mentality. A lot of fire on a lot of entrenched troops/light armor in a treeline or foxholes.

5
What is the difference between Bell AH-1Z Viper and Apache Longbow in terms of role?
11
How does the energy and weight efficiency compare between a battery/electrical propulsion and combustion engine?
3
Can the Apache detect infrared (IR) lock?
2
What is the difference between MIL-H-5606 and MIL-PRF-5606 hydraulic fluid?
2
Why does the Apache create much more rotor noise than the A-129?
4
What is a compounding wing and how does it increase helicopter performance?
4
With similar weapons why does an AH64 Apache require a pilot and gunner when the A10 Warthog only needs a pilot?
2
Is the Mil Mi-2 still in production?
1
MIL-PRF-5606J, What does "J" means? Does it equal to MIL-PRF-5606?