What is the operating temperature of a turbo bypass engine, and how is it kept at that temperature?

Q1: Assuming that by operating temperature you mean turbine inlet temperature, this article says the Pratt & Whitney F135 engine in the F-35 (JSF) has a TIT of 3600F, but that most high performance aircraft engines do not exceed 3000F, while non aviation engines are nearer 2700F or lower. Exact figures for modern engines are very unlikely to be stated in public. Mattingly, in his book "Elements of Propulsion: Gas Turbines and Rockets" has a table (6-2, P363) that gives a general guideline, depending on the age of the engine. He says:

The GE J79 gas turbine which had its first run in 1954 is claimed to have a TIT of 1710F, so these guidelines look reasonable.

Q2: Increasing the turbine inlet temperature allows more fuel to be added, which increases thrust and hence thrust to weight ratio, and specific thrust (thrust per lb of air ingested). Increasing TIT (at the same pressure ratio) also has some effect on improving the specific fuel consumption. At the same TIT, SFC is improved by increasing the compressor pressure ratio. The chart below shows the effects for a particular engine, the specific effects will differ for each engine depending on the bypass ratio etc. 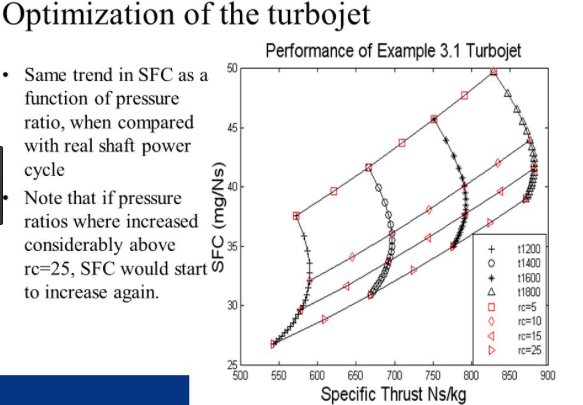 Q3: There are three methods that can be used to cool turbine parts. The primary approach is to bleed off a portion of the compressor exit air, which then bypasses the combustion, and is feed into the turbine vanes and blades. The below picture also includes some numbers for the % flow of compressor exit air that is used. 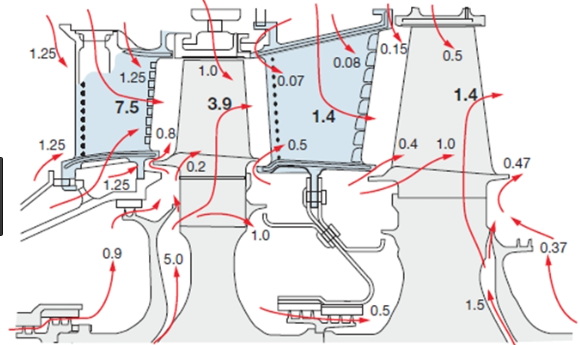 Other methods that are often used as well include the use of small holes over the blades and vane surfaces, through which the cooling flow emerges. This provides a film of cool air over the part, and is known as film cooling (left picture). On some more modern engines, thermal barrier coatings are also used (right picture). These are ceramic coatings that act as insultion of the base metal from the hot gas. Usually the TBC is added as an extra method to help gain additional part life. But sometimes, the TBC is needed to obtain the base life, and is then know as "prime reliant". 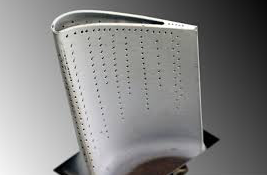 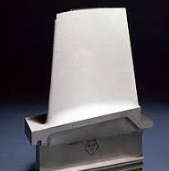 Yes, if you could increase the combustion temperature in the hot section of a gas turbine, you could dramatically increase the efficiency of the engine. The problem of course is finding materials which can sustain structural integrity in these regimes for long service lives and still contain the hot gas; we are currently at the thermal limits of existing materials.

The key problems here are:

Temperatures - gas turbine hot sections operate at 1600°F all the way up to 2600° F for high performance military engines in order to yield high thrust or high useful work for a unit of fuel burned. No known metals can survive these upper limits and still maintain high yield strengths. It also causes great thermal expansion problems between non homogenous materials and coatings as well as oxidation and galvanic corrosion.

Stresses - the spools of a gas turbine can spin as fast as 40,000 rpm in the cases of high pressure compressors and high pressure turbines. This creates tremendous centripetal loads on the blades and other components which they must be able to endure and not exceed the yield strength of the material.

Extended operation between servicing and reliability - the engine must survive these loads for several hundred cycles over a period of several thousand hours between major overhauls. Redundancy as well as resistance to damage must be built into the design as well. The consequences are grave; the trustworthiness and reliability of two gas turbines engines are all that separates a successful Seattle to Moscow polar flight in a 777 and 320 people freezing to death in the Arctic Ocean.

Historically gas turbine hot sections have been constructed from alloys of metals with high melting points and good yield strengths like nickel and cobalt of a very high purity. Titanium and Molybdenum are also beginning to be used in this as well. Additionally forming techniques such as single crystal casting are used to remove crystal grains from the material to improve its strength. The blades ('buckets') of a high pressure turbine are also cast with channels in them and have fine holes laser drilled in their surface in order to take compressor bleed air and 'bathe' the boundary layer of the bucket with cooler air, effectively wrapping it in a cool gas blanket to protect it from the high temperature exhaust.

More exotic materials and techniques are being considered for this. GEAE and P&W both are exploring the use of composite and ceramic blades in hot sections. These offer high yield strengths at high temperatures but again pose challenges in terms of oxidation and thermal expansion problems.

67
Why do jet engines get better fuel efficiency at high altitudes?

18
What prevents jet engine designs with larger bypass ratios?
20
How are temperature differences handled in a jet engine?
6
How does turbofan engine performance depend on speed and density altutude?
2
Why is the combustion temperature in a turbojet engine kept low?
2
Has a jet "engine" ever been made that only uses the thrust from the bypass air and doesn't have a combustion chamber?
4
Does the P&W F100 turbofan engine of the F-16 really produce this much power?
36
Why do new jet engines cost billions to design?
2
How can I calculate turbofan efficiency as a function of turbine inlet temperature?
1
Are high bypass turbo jet engines suitable for tail and body mounted engines