Why is the takeoff decision point based only on speed and not time or distance?

The go/no go decision on takeoff for airliners is calculated as a V1 speed. The question is, why is there no time or distance for V1 calculated. In other words, if we don't reach V1 in X seconds or by X point on the runway the takeoff is rejected.

An example of where this might have prevented disaster is Air Florida Flight 90. The engine inlet probes were frozen, resulting in an inaccurate EPR reading. This caused them to set thrust much lower than they should have. They reached V1 and VR but with degraded lift, due to icing, they were not able to climb over the bridge. The FO felt something was wrong, but the captain told him it was fine and called V1.

The chain of events leading to this accident was very long and full of bad decisions. But had there been a hard and fast rule that if V1 has not been reached by this point then reject takeoff, the chain could have been broken.

Another example of where degraded performance resulted in too long of a takeoff roll is the Lokomotiv YAK-42 crash, although it doesn't appear they even had a V1 speed calculated either. They weren't accelerating fast enough, but the captain carried on expecting it to lift off at any moment. They went right off the end of the runway before it did. The reduced acceleration was obviously not enough to make the captain reject right away and by the time it did become obvious he was out of options.

There may be an unknown number of runway excursions where there was degraded performance and the crew did reject takeoff, but too late to stop.

If an engine has a problem it may continue to function in a reduced capacity then finally failing after V1. The procedures call for continued takeoff after that point, but they may have used up too much runway already.

There are myriad things that can cause degraded performance on a takeoff roll. Anything from tires, brakes, engines to flap configuration, even runway condition can slow you down and it may not be obvious that it's occurring. Many of these things won't show up on an instrument scan or a checklist. It just seems like there's no specific guidance as to how long you wait for V1. How does a pilot know when it's time to call it off?

My guess from a human factors perspective, focusing on 2+ things (e.g., speed and time) is harder than one.

Newer aircraft have installed automatic monitoring though. For example for the 787:

This message is inhibited 6 knots before V1.

Or the similar system (supposedly) on the A350. Airbus calls it ACUTE:

The Airbus Cockpit Universal Thrust Emulator (ACUTE) converts the engine control parameter into a common Thrust parameter (THR) for all engine types. The thrust parameter varies between 0% and 100% in all flight conditions.

This would understand a faulty/blocked EPR probe for example.

For inadvertently holding down the brakes (extremely rare occurrence), the brake temp should rise considerably. And with today's glass cockpits, a warning will be easy to spot.

A warning system built to use the accelerometers on board will need to measure the acceleration against flight test data. But not just acceleration, a plane's acceleration on takeoff varies, due to increasing drag and decreasing friction (landing gear decompression).

See this PDF, and this post: Does acceleration increase linearly on a takeoff roll?

An average positive runway slope value used in real life can be down to a runway sloping down, then sloping up at the end of the runway. Some dispatchers note that, others do not need to. But this false value can trip the system.

My point is the variables are immense—even nose heavy acceleration will be different—and would require lots of money to test, verify, test again, then have a system that can monitor all that. I'll bet there will be many false positives.

Add to that when to start measuring it, a pilot pushing TO/GA at 10 knots (ground speed) versus 40. IAS is useless here due to wind.

If the system will allow for big tolerances, then properly trained pilots can notice it much easier. To borrow what Carlo said here, using TLAR (That Looks About Right) is enough.

Let's not forget that there is a speed trend arrow on the airspeed indicator on most of today's airliners: 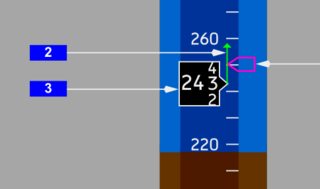 Green arrow shows what the speed will be in 10 seconds on a Boeing 787.

For the generic very slow acceleration (as far as I can tell), Honeywell is developing that system as part of their SmartRunway package. (Thanks to fooot for mentioning that.)

He advanced the throttle to a setting too low for the weight of the aircraft and started the takeoff roll, with distance remaining ticking down on the display. At 80 knots, a yellow box framed the runway and “ACCEL LOW” appeared at the top of the screen. “Caution: acceleration, acceleration,” said a female voice from the simulator setup.

Regarding the method used by the USAF (explained here): it does not work for the big civilian airliners due to the disparity between an empty plane and a fully loaded one (compounded by the environmental variables). A 777-300ER can carry anywhere between say 20 tonnes (fuel for a short hop), and 183 tonnes (payload and fuel).

On the GA side, the POH for a multi-engine airplane will include an Accelerate-Stop chart (basically V1 calcs). The calculated V1 speed will be associated with a runway distance. This can be (but maybe isn't often) used to check normal acceleration to validate the TOLD Data

Easy answer - takeoff roll/speed checks other than V1 are used, and even V1 has a correlated distance in the takeoff data.

10
How do pilots of big jets determine if they are clear of the runway after landing?
8
Does acceleration increase linearly on a takeoff roll?

7
What are the V-Speeds used during a normal takeoff in a multi-engine airplane?
22
Could fly-by-wire protect against a takeoff tail strike?
17
In a 747 is it normal for the Vr (takeoff speed) to vary greatly depending on fuel load and ambient temperature?
14
Why would pilots “call the company” after an aborted takeoff?
2
Is reducing V1 a viable option for pilots when the ASDA is shorter than the ASDR?
1
How can I find out the reason for an aborted takeoff?
4
Why disable stall warning based only on low airspeed, rather than multiple criteria?
13
In light aircraft, non-instrument flight, apply (nearly) full aft elevator before beginning the takeoff roll or at some predetermined speed?
5
Why not separate out the two definitions of V-1 into two separate Vspeeds?