What does the 'hp' rating actually signify, with respect to an aircraft engine?

Is the Lycoming engine 180 times more powerful than my water pump?

Can they be compared with each other - one's based on electricity, and the other is based on fuel combustion)? Or have I got it all wrong? The Airbus E-Fan has 2x30 kW (2x40hp) electric motors, and it's slow (with respect to the 172S), cruising at only around 86 kn.

Let's say I have another (read experimental) aircraft of just a quarter the weight of the 172S and very similar drag-profile. Does that mean I only need a 45 hp engine to achieve similar performance?

What is horsepower? It is a measure of the work a horse can do in an hour, invented in the time of the steam engines in order to make sense of what they could do, in a time when all work was done by humans and horses. As usual before the SI, there were many definitions of horsepower. Here is the one from wiki, on what a metric horse could do: 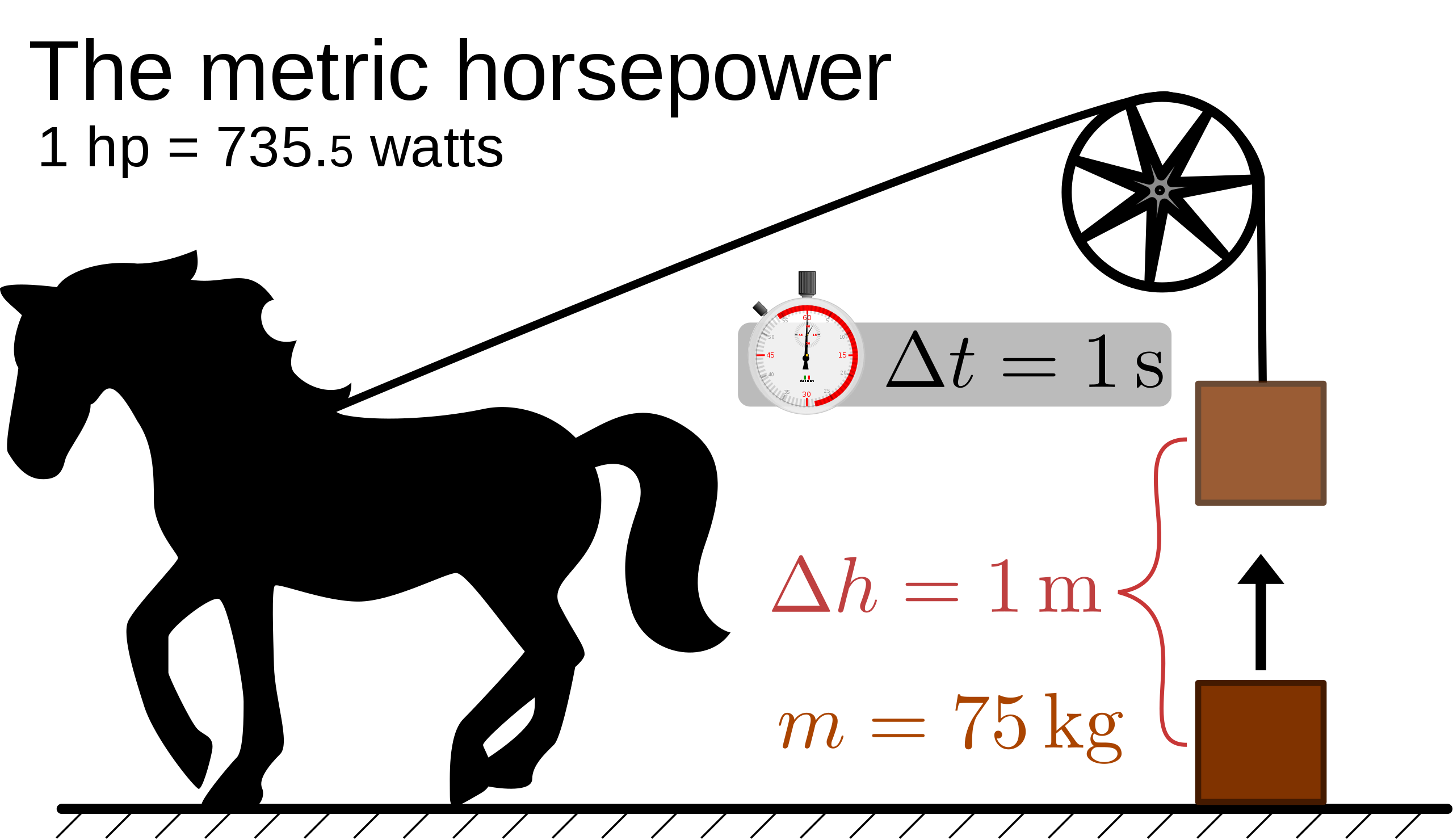 Notice that there is a time element in the picture: if the horse takes all day to raise the weight one metre in height, he is not very powerful.

Nowadays, the unit of power is the Watt, after James Watt who coined the horsepower unit to sell his steam engines. It is defined as the force in Newton, required to move 1 kilogram over one meter in one second:

In these units, you can see a force times a velocity, and that is one way of looking at what power is: you need more power to drive faster up a hill. But these are linear entities, and most power is made by rotary engines. Rotary units are torque (N*m) and how fast the engine is spinning (rad/s).

With engines, it makes a difference where power is measured. There are always losses caused by friction and by energy conversion, and the closer you measure at the output shaft of the engine, the higher the reading. This is what vehicle manufacturers rather do: car engine power is measured at the crankshaft, not at the wheels that actually propel you over the roads, because between engine and wheels there are transmission losses.

The question why power is used for engine rating, and not force or torque, is an interesting one. It is force that accelerates us: $ F = m \cdot a$. We can gear the motor force or torque output as required - if the gearing had no losses, power before and after gearing would be the same. So horsepower is useful to compare capabilities of engines, regardless of gearings. However they wil always be maximum capabilities.

With an aircraft, the engine power needs to propel the aircraft via the propeller. The propeller delivers thrust T, and can drive the plane at speed V, maximum speed being where drag equals thrust. Engine power is thrust times airspeed, plus the power required to overcome losses: mechanical losses due to friction, and aerodynamic losses due to propeller efficiency.

Your question on having an aircraft a quarter of the weight and similar size. The thrust is required to overcome aerodynamic drag, both friction drag and induced drag from lift. Friction drag will remain equal, lift induced drag will be 1/4th of the full weight version. You will need more than 45 hp to get the quarter weight aircraft to travel at the same cruise speed. 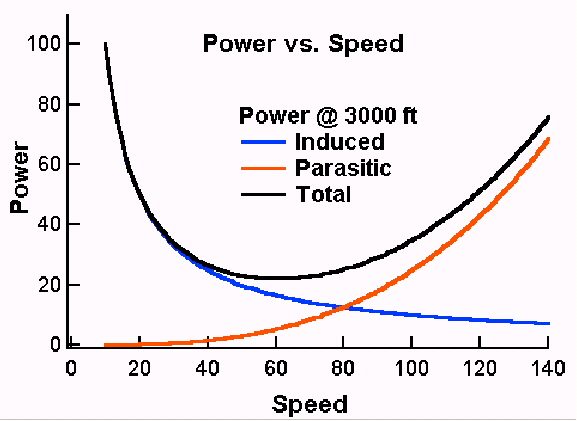 I apologise if I'm over simplifying, but a piston engines output can generally be measured at the wheels or crank. As aircraft don't have powered wheels, what we are measuring is purely the power that the engine can deliver at the crank/output shaft where we can directly attach our propeller.

When manufacturers list horsepower they really mean 'maximum horsepower'. This is directly calculated from the torque the engine can deliver at a specific RPM. The engine will deliver different (i.e., less) outputs at different speeds. So you can think of horsepower as the calculation of torque multiplied by RPM. (It's actually then divided by an arbitrary value to make it into 'horses') with the list value being the highest combination of torque x rpm the engine can deliver.

Torque is the measure of actual force the rotation of the engine can deliver. So, because RPM is the multiplier, a very very fast but low torque engine may have more BHP than a slow but torquey engine. Think about the difference between a truck and a light sports car - the truck needs a lot more force to move so a high horsepower sports car engine will be useless if it can't deliver the required torque.

Alone, it also says nothing about efficiency or, for example, the amount of time the components can sustain this. Nor does it define how that power is harnessed - 100hp through to a feathered propeller produces different results to a non-feather propeller for example.

As should be clear, a single horsepower value doesn't tell anywhere near the full story about an engine.

For any non-piston engine, we would need this value at some form of output shaft in order to compare it like for like. You'd need more specific details on the measurement of any particular engine to determine where the measurement was taken.

Finally, even when the comparison is 'fair', because power is a product of torque and RPM we can't say two 100hp engines are equal. We would need to know exactly when in the 'power curve' that this power is delivered. This isn't linear, hence the requirement to dynograph engines.

If, however, you could find two engines which deliver the same power at the same RPM (i.e., they'd be the same on a graph) then the performance should be similar. But then, unfortunately, we have to discuss things like response time where, for example, a jet engine can take a long time to spool up but an electric engine can be near instant.

TL;DR Comparing power plants is really very hard, even with full figures. Comparing based on a single number is vaguely indicative at best.

In addition to the other answers: for internal combustion engines, the rated power is the maximum amount of power the engine can produce, i.e. with full throttle applied and at the optimum point in its rev range. A more comprehensive way to indicate how much power an engine has, is the power/torque curve like this random example:

This shows how output power varies with rpm. The peak in this curve is quoted as the rated power.

Now, electric motors are very efficient: around 95% of input power is converted to motion of the output shaft. Your water pump will convert 950 W to motion and only 50 W to heat.

Internal combustion engines are far less efficient. A really good petrol engine converts about 30% of the energy in its fuel to motion (diesels can get to 40%). The rest is lost as heat and noise, via the cooling system and the exhaust.

14
What's the use of so much torque on propellers?
6
Why are the top speeds for jet engines higher than for propellers?

9
How does aircraft design affect carburetor ice?
20
Are turboprops more efficient than piston engines (thrust per fuel consumption)?
14
What's the use of so much torque on propellers?
6
Under which conditions is full rated power instead of METO power required for takeoff (DC-3/C-47 with Pratt&Whitney 1830 twin wasp engines)?
56
What energy density is required for the batteries in order to make an all-electric analogue of the Cessna 150 or similar plane?
9
Why would you NOT lean on takeoff with a Lycoming engine?
2
How does altitude affect the TAS and thrust of an electric fan powered aircraft?
1
How do power and thrust curves compare?
1
How do you quantify rudder effectiveness as a function of bank angle?