Do high-speed ailerons help with the roll rate control in non-FBW?

Do inboard high-speed ailerons help with the roll control by decreasing the moment arm as a secondary benefit? As in make it harder to exceed the roll limits when at high-speed.

I know the main benefit is to avoid aileron reversal. Also I'm aware discussing tailoring the stick forces in depth will be too broad. So I'm not after an in-depth analysis. Just if that secondary function is indeed a reason.

Comparison of high-speed aileron placement on Airbus and Boeing is shown below. In an Airbus with fly-by-wire (FBW), the stick commands a roll-rate. And all the Airbus FBW heaviesâ€”including the A380â€”do not feature far-inboard ailerons like the Boeings. In other words, if FBW did not exist, could Airbus have still been able to not have mid-wing ailerons? 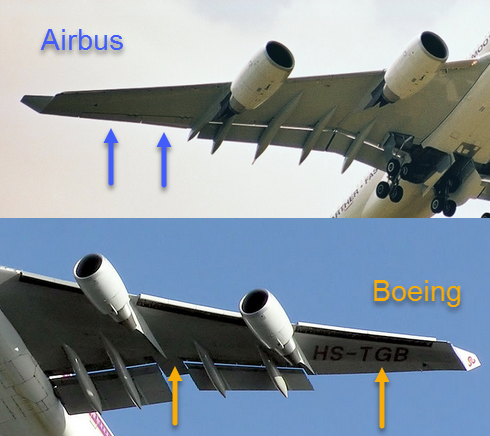 No it does not reduce the aeroforces: the hydraulic actuators that deflect the inboard aileron have as much of a force to apply as the ones at the outboard aileron. Force for deflecting a flight control surface is a function of dynamic pressure, surface area and of surface deflection.

As you state in the question, the inboard aileron reduces wing twist which could produce aileron reversal at high dynamic pressures, particularly problematic with relatively thin wings and high wing sweep angle.

The reduced moment arm affects the aircraft response upon aileron deflection. The problem with the ailerons is that a deflection equates to an end roll rate, as opposed to the elevator and rudder where a deflection results in an end angle. Many aircraft have a slow roll oscillation in cruise that the autopilot compensates for. If it must do that with an outboard aileron at M=0.85, the strong response of the outboard aileron makes it hard to not overcompensate. I have seen the inboard ailerons on a B747 do a slow deflection dance in cruise, while the aircraft roll angle stays perfectly still.

Slow roll oscillation in cruise was a problem with the F100 for a short while, the gains in the autopilot could not be set low enough to obtain a constant zero attitude. Not really a problem, only in the perception of passengers looking out of the window. It was ultimately solved using different logic but unfortunately I don't know how they did it.

9
How does aileron reversal work?
4
What classes of aircraft require hydraulic flight controls?

14
Is roll control achieved exclusively with spoilers on an A320 on final approach?
2
For a small flying wing, can two motors with different speeds replace the ailerons?
6
What determines spanwise placement of spoilers for roll control?
5
Are there roll control devices other than ailerons?
3
What is the term for an aileron thatâ€™s also used as a ground spoiler?
17
Why aren't 757 scimitar winglets flush with the ailerons?
6
How are the 737â€™s elevator and aileron cables attached to their control tabs without impeding the control surfacesâ€™ motion under hydraulic power?
6
Why doesnâ€™t the A320 have any provision for manual aileron trim?
2
What is the maximum roll rate for an RC aircraft of low maneuverability?