There aren't many wide-bodies out there. Whether it's Douglas, Boeing, or Ilyushin, they all have the high-speed aileron interrupting the flaps. Whereas Airbus uses uninterrupted flaps in all their fly-by-wire aircraft with the two ailerons outboard.

After Boeing has adopted fly-by-wire, it is still sticking with its flaps design in the 777 and 787. I'm aware Boeing now uses flaperons, but as the image below shows, its deflection is not all the way to avoid the jet blast, but how does Airbus get away with it?

For the uninterrupted, here are some reasons I can think of but can't link:

Why did Airbus choose this design (apart from its A300/A310)? They must have a good reason. Equally for Boeing for not using them with its FBW aircraft. Unless it doesn't matter, or a patent is involved. 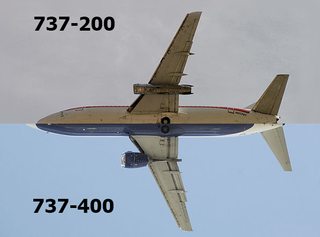 The two designs are indeed based on compromises.

Earlier Boeings were designed for high-Mach cruise, which means high sweep and the need for elaborate flaps when flying at approach speeds. The 'thrust gate' reduces the thrust/flap interference and drag, especially in a go-around. It is also a good choice when more powerful engines will be offered as the MTOW increases.

When Airbus designed the A330/A340, it helped that they launched the bigger variants first. A targeted (tailored) design is not good when the aircraft would later be stretched, which would require a re-design of the flaps, i.e., if the shorter variant comes first, then 'over-designing' the flaps and having a thrust gate is a good choice.

Interestingly for the A350-1000 (a stretch of the -900), Airbus had to increase the wing area by 4% by modifying the wing trailing edge to maintain the same approach speed (flightglobal.com).

Losing the gap does save weight, complexity, and by extension, maintenance. But the limitations are:

Own work based on scaled drawings from boeing.com and airbus.com.

Boeing tends to prefer higher MMO, higher MTOW, and to offer the base-variant then scale it up. All of which would benefit from the 'thrust gate' and the more elaborate flaps. The overall trend however shows Boeing going for simpler designs: 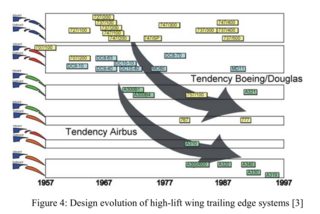 This answer is based on a publication by an Airbus engineer:

One data point which shows that interrupting flaps does indeed cost a lot of lift is the comparison of the maximum lift coefficients of an Airbus A320, where the fuselage causes a wide gap between the left and right wing flaps, with the high wing BAe 146 where the gap between the flaps is filled by the fuselage. Even though the BAe 146 has no slats, its landing lift coefficient is 20% larger than that of the A320. The lower sweep of the 146 wing helps here, but most of the difference is caused by the fuselage. If the BAe 146 had slats, the difference would be even larger.

Not the answer you're looking for? Browse other questions tagged aircraft-design aerodynamics airbus flaps or ask your own question.

15
How does the particular piece of flap behind an engine on a B777 work?
21
Why do flaperons 'move down then up' on takeoff roll on a 787?
10
Why do similar Airbus and Boeing aircraft use different flap and slat mechanisms?
14
Why are there large gaps in the spoilers of the Airbus A300?
13
When Boeing designed the 737NG, what factors influenced the change in the flap system?
6
Do ailerons on opposite wings move together?
5
Why are the engines not tucked underneath the wings of airliners?
5
What are the benefits of using thick trailing edge flaps?
1
Why are there so few high-wing jetliners?
3
Why do outboard spoilers deploy more than the inboard spoiler on the A320?
See more linked questions

10
Does Airbus have a production problem?
11
What is the point of having lots of different flaps settings?
4
How do partial- and full flaps compare for gusty approaches?
5
Heaviest Boeing vs Airbus aircraft: Why large (150 ton) difference in Weights?
2
Can you fly the plane manually without disengaging autopilot?
7
Why does the A320’s maximum allowable aileron deflection decrease, rather than increase, when the flaps are extended?
7
Does fly-by-wire permit smaller tail fins (area and thickness) for jetliners?
0
Why did Boeing keep using yokes while Airbus moved on to sidestick?
0
How do aircraft window size compare to each other? What are some possible improvements on them?
5
What, if any, would be the most correct term for the aerodynamic flight control surfaces of SpaceX's Starship?