Why is vortex state impossible in autorotation?

An article at Skybrary states that for a vortex ring state to occur:

The aircraft has to be in powered flight. If the engines are not producing power, the aircraft is in autorotation and the upflow of air (rather than engine power) is being used to drive the rotor motion. It is not possible to enter the vortex ring state whilst the helicopter is in autorotation. [emphasis mine]

The FAA Rotorcraft Flying Handbook.pdf lists autorotation as a method of getting out of VRS.

Why is a VRS impossible during autorotation?

Vortex ring state (VRS) occurs when the rotor's shed vortices begin to recirculate into the rotor system, effectively stalling out the rotor and significantly decreasing the total thrust produced. It is one of 4 working states of the rotor, 3 of which are described in the picture below (note: descent rates are approximate. What really matters is the ratio of the velocity induced by the rotor to the helicopter's descent speed). The propeller working state is the normal working state of a helicopter. VRS is the second state shown, where descent rates are relatively low (and forward flight speed is typically very low/zero), and the windmill-brake state is what you'd see in autorotation.

In the following plot (from Leishman's Principles of Helicopter Aerodynamics), these working states are superimposed on a graph of climb velocity and induced velocity at the rotor disk. In short, VRS occurs when you're not descending fast enough to let the downwash be blown upward and you're still trying to produce thrust. One example would be a helicopter attempting to hover above its hover ceiling (so, even at max power, it cannot maintain altitude and has a small, negative climb velocity ratio if referenced to the below plot). As a result, it begins to descend at an increasing speed (and, by corollary, it is falling "into" its own downwash as its downward speed increases). 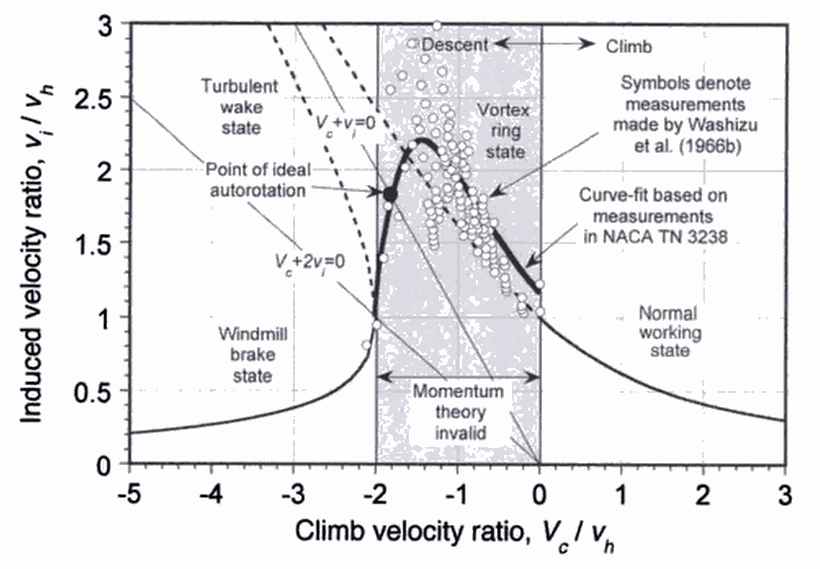 So why is autorotation a way out? Autorotation is what happens when, in a sense, you stop trying to hold yourself up. In autorotation, the thrust produced by the rotor is minimal (depending on how you do your bookkeeping of forces acting on the aircraft) during descent. As a consequence, the aircraft is descending so quickly that the rotor wake is actually above the helicopter! Also, while the rotor is producing some lift, and hence some downwash, the induced velocity of the downwash in the vertical direction is very small compared to the velocity of the relative wind going through the rotor disc (in the opposite direction of the downwash).

Putting this all together in different words: vortex ring state is sustained by the pilot trying to keep pouring power into the rotor system while descending into his or her own downwash (without changing forward flight speed or tail rotor thrust, as mentioned in this neat article: http://www.rotorandwing.com/2015/09/01/flying-through-the-vortex/). He or she is producing downwash by producing thrust, and, as the descent speeds more or less balance with the downwash velocity, the same aerodynamic forces that produce the thrust end up recirculating the downwash through the rotor.

To go into autorotation, the pilot drops collective and throttle to zero and lets the aircraft fall (more or less -- it's a little more nuanced, but that's a separate question), which, in turn, drops the induced velocity of the downwash such that it is much smaller than the vertical speed of the aircraft, allowing the vortices move with the relative wind away from the rotor (upwards) as the rotor enters the windmill-brake state. Since there is no mechanism to hold the vortices close to the rotor (or produce them in the first place), the vortices cannot recirculate and induce VRS.

Not the answer you're looking for? Browse other questions tagged helicopter auto-rotation vortex-ring-state or ask your own question.

15
What is "settling with power" and how does it differ from vortex ring state?
0
Can a helicopter enter Vortex Ring State In Auto Rotation? [see qualifiers]